Comments Made to A Portland Newspaper Reporter

Yesterday & today, I attempted to contact a reporter for a Portland area newspaper who had emailed me earlier in the week to set up a phone interview.  Since the phone interview didn't happen, I quickly pounded out these comments, the message I want to send to southern Maine people.  The reporter emailed back and said he would see what he can use (typical!).  Anyone who reads this who wishes to do a letter to the editor, any segment of this can be used as the basis of an…

By the narrowest of margins, LD 828 gained approval in Maine's House of Representatives.  The bill would restore the rights of citizens in the Unorqanized Territories (UTs) to have a say regarding wind power projects.  This right was stripped away when the "Wind Law" placed the UTs in the Expedited Permitting Zone classification.  Organized towns that are similarly in the expedited zone have the right to withdraw, something denied to citizens in the UTs.  It is very clear that the wind…

Score another wind ordinance victory!  On Tuesday, June 9, the voters of Dixfield approved a restrictive wind ordinance for their scenic town in Maine's western mountains.  The close vote is a culmination of years long local debate and the new ordinance replaces a weaker version.  A bad day for Patriot Renewables, which has had its sights on Col. Holman Mt. in Dixfield to add to its Saddleback/Carthage project that is currently under construction and its approved project for Canton Mt. …

Every now & then there is good news from Augusta and yesterday was a great day for opponents of wind power in Maine.  The Maine Senate, in spite of heavy lobbying by the Wind Industry that fears economic scrutiny, did the right thing and affirmed the nomination of dr. Bruce Williamson as the newest member of the Maine Public Utilities Committee.  See the story here:…

Will It Come to This??? Shooting Up Wind Turbines???

First, let me say I believe we are a nation of laws and I believe it is against the law and morally wrong to destroy someone's property.  But the "Wind Law" foisted upon us by Baldacci in 2008 and protected from any change whatsoever by the Democrats who sold out to the Wind Industry is one of the worst pieces of special interest legislation ever enacted.  It results in the proliferation of sprawling industrial wind turbines and ruination of Maine's natural and scenic resources.

In a surprising turn of events among the Democrats who control The Legislature's Energy Committee (EUT), they reversed their blockage of a vote on the PUC nomination of economist Dr. Bruce Williamson and voted to endorse the nomination by 11-2 margin.  Surprising, because the wind industry usually has its way with the Democrats on this committee and they fear the scrutiny of their scam by an economist.  This is a great opportunity to do some on-line comments criticizing the economics of wind…

Legislative Energy Committee Chair Rep. Mark Dion and Sen. Dawn Hill, both Democrats, are attacking the integrity and independence of LePage PUC appointees Mark Vannoy and Carlisle McLean.  They have created a false charge of "crisis of confidence" and it is all centered around the realization that things just might not go their way of protecting the wind industry from scrutiny.

The Governor has stricken fear into the Democrats by nominating an economist with no ties to Maine, Bruce…

As we all know, the Democratic chair of the Maine Legislature's Energy, Utilities and Technology Committee, Rep. Mark Dion of Portland has been carrying out the directives of Maine Democratic leaders to protect the wind industry.  With wind cheerleader David Littell being replaced by a LePage nominee, a highly regarded economist named Bruce Williamson, the Democrats fear economic scrutiny of the wind industry will stop the scam rather than promote it as in the past when the PUC was Baldacci…

Disapponting News from PUC About Contract for Highland Wind Project

This is disappointing news from the PUC.  Are wind critics' hopes being dashed by LePage appointee Carlisle McLean voting with outgoing wind power cheerleader David Littell to possibly approve the long term contract for useless wind power that threatens to destroy the Highlands near Concord and Lexington Townships?  We need lots of comments on this one!
Excerpt:  "Maine Public Utilities Commissioners David Littell and Carlisle McLean agreed a deal was near with NextEra and…

The American Bird Conservancy says more than 30,000 of the existing 48,000 turbines are in places that government agencies or nonprofit organizations such as the National Audubon Society describe as having special significance to birds.  The article is focused mostly in the upper mid-west and around the Great Lakes, but Maine has raptors and migratory flyways that are already threatened by massive wind turbines.  A good example is the Rollins Wind site in Lincoln Lakes, where two nesting…

Reminder of the Economics of Wind Subsidies

While I am appalled by the destruction of Maine's natural and scenic resources by the proliferation of the industrial wind scourge, I have always tried to make economic arguments.  The article linked here does a good reminder of the reliance of the wind industry on subsidies.

"New data show just how bad a deal wind energy is for taxpayers — and the largesse extends far beyond the PTC. In 2013, wind received almost $6 billion…

Katahdin Wind Power--Is This the Future?

So, this photoshopped depiction of wind turbines on Mt. Katahdin might be a bit extreme, but it makes a strong warning to Katahdin Region people and everyone who loves the unique natural and scenic resources of our beautiful state! The Molunkus project proposed by First Wind (now SunEdison) will be 500+ ft tall turbines just 15 air miles…

I recorded two hours of criticism of industrial wind power in Maine for Box Talk Radio on WLOB radio.  I previously posted Part 1 and here is Part 2.  Please share these with others.
http://www.boxtalkradio.com/BTR01312015Adone.mp3… 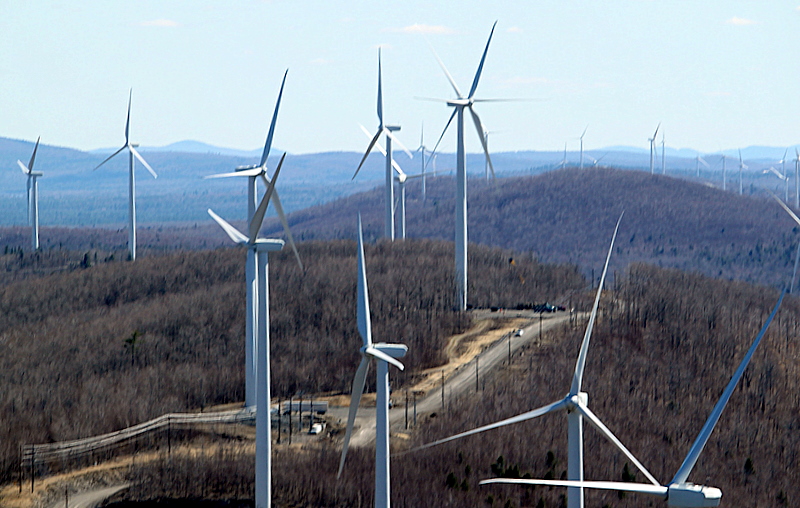 As everyone expected, a full court press is happening with the wind industry and their cronies in Congress, trying desperately to get the Production Tax Credit renewed and extended.    They have joined the others in the pack of taxpayer funding thieves to get a broad "Extender" bill passed.  You can help stop this.

Friends of Maine's Mountains has set up a letter opposing the PTC extension that you can electronically "sign".

Amazingly, the Bangor Daily News published in this week's Metro Magazine an excellent essay critical of the wind industry's tactics based on the author's experience in Frankfort, Maine and its dealings with Eolian wind developer (the worst of the worst). Unfortunately, the Metro Magazine doesn't provide commenting opportunities. It is also unfortunate that the editor chose a stock photo intended to glamorize wind turbines instead of a photo of a destructive Maine wind site. Still, this is a…

This week, there is a story about Harvard University's goal of using 100% renewable energy in the Harvard Crimson.  Be sure to not only read the story, but also the comments.  Whereas the story is critical of the world's best electricity grid not being conducive to the widespread use of renewables, it has opened the door for some of our wind warriors totry to do some educating to all the victims of green group think in a liberal college. …

An Essay Regarding Jobs in Maine and Wind Power Development

We frequently see the wind industry's line about all the jobs they create.  I responded to someone tonight and before I knew it, I had written the following essay.

Sir, you have been listening way too much to the wind power industry's propaganda. They count every possible job related to planning and constructing these projects, however remote that connection may be.  Yes, it takes some consultants to draft the application materials, some engineers to plan and lay out the project. …