Wind Power Totally Fails When Needed the Most

Here we go again, as usual! We are in the midst of a heat wave, with the highest demands of the year on the New England grid. We need to dispatch more power as demand soars far beyond base load. To what source do we turn? Gas fired plants--maxed out. Crank up the oil fired Wyman plant on Cousin's Island, fouling Maine air with the largest single point of air pollution in the state--GRRR!!! Prices soar as ISO-New England searches the spot market!
But what about wind power? Not a single megawatt all week! The wind is still or feeble at best during these hot days, so when the New England grid needs more power, wind is a total failure. WIND POWER CANNOT BE DISPATCHED TO THE GRID WHEN NEEDED! It is, at best, a fickle trickle source of intermittent, unpredictable, unreliable electricity that wouldn't even exist except for unduly favorable subsidies (per MWH). It is a scam and a scourge on Maine's natural and scenic resources. 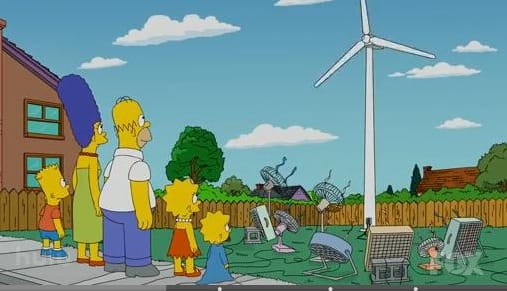 Yet another factor working against wind are the losses on hot days from long transmission lines:

How big are Power line losses?


Electricity has to be transmitted from large power plants to the consumers via extensive networks. The transmission over long distances creates power losses. The major part of the energy losses comes from Joule effect in transformers and power lines. The energy is lost as heat in the conductors.

Considering the main parts of a typical Transmission & Distribution network, here are the average values of power losses at the different steps*:

The overall losses between the power plant and consumers is then in the range between 8 and 15%.

Is it the biggest challenge?

This must not be mixed up with the efficiency of power plants like nuclear, coal-fired or natural gas turbine. These technologies are based on a thermodynamic cycle, which efficiency is in the order of 35%. This means that the combustion of coal, for example, will produce heat, which will be converted into mechanical energy and then into electricity.

The global transformation is summarized on the picture below where “units” represent units of energy.

From the energy assessment, it can be concluded that 100 units saved at home can save 300 units saved at the power plant. This should be a real encouragement to save energy for a greener environment.

Don’t mix up heat and electricity!

Otherwise, this energy assessment relates to fuel burning power plants, and not to renewable energy like hydro-electricity or wind turbines. These technologies have a much better efficiency and do not produce heat for the energy conversion. The 100 units saved at home represent much less than 300 units saved at the power plant.

But this is not a good reason for wasting electricity!

Here is an other ISO-NE site.

A subsidy SCAM, dreamt up by Wall Street, that produces expensive electricity, and enriches the rich at the expense of everyone else.

Here are some articles for your info.

Ramp up the nuclear and hydro. Why are we wasting time and money on boutique power sources?  We need science-based energy policies utilizing "all of the sensible" and rejecting the rest.

Please keep in mind that these data are for electricity generation only. So as insignificant as wind is here, bear in mind that in Maine, electricity generation accounts for less than 10% of annual CO2 emissions. In other words, when you see wind here at 1%, it's really 1% of a tiny percentage. Maine is being destroyed and Mainers' lives turned upside down for this nonsense. It's all about money - taking ours and putting it in the pockets of the wind developers and those they've "gotten to".