This week, there is a story about Harvard University's goal of using 100% renewable energy in the Harvard Crimson.  Be sure to not only read the story, but also the comments.  Whereas the story is critical of the world's best electricity grid not being conducive to the widespread use of renewables, it has opened the door for some of our wind warriors totry to do some educating to all the victims of green group think in a liberal college.  http://www.thecrimson.com/article/2014/9/30/the-fantasy-of-100-perc...

I couldn't help but comment because of the corrupt connection between Harvard and First Wind's Stetson II project, which has been written about previously on the CTFWP site.  Harvard signed a PPA to purchase half of Stetson II's output and they now have the honor (those smart Harvard people!) of having a PPA for the WORST producing of all the Maine wind sites, at less than 20% capacity factor!  Below is my comment posted in the Harvard Crimson:

Harvard signed a Purchase Power agreement for wind power at Stetson II, more than 300 miles away in remote rural Maine.  This project, encompassing 17 GE 1.5MW turbines sits on top of two once gorgeous little mountains, Jimmey Mt. and Owl Mt. that were blasted to pieces, scalped and leveled for a project that produces less than 20% of its design capacity.  What a poor investment by Harvard!

But the story behind this project is even worse, as it represents the fleecing of taxpayers for useless wind projects and the corrupt influence of people in high places.  It starts out in 2009 with First Wind being in its usual precarious financial situation, not obtaining financing to proceed with the risky project after doing some initial site work.

The $42 million rescue of First Wind's mothballed Stetson II was part of the first Obama economic stimulus. Here is the connection: Former President of Harvard Larry Summers was Obama's chief economic advisor at the time. (Summers was Treasury Secretary under Clinton) He was in position to include or exclude projects in this stimulus package. Later, in the second stimulus package, the same project, Stetson II, got $19.3 million of the total $235 million wind developers in Maine got from ARRA Sec. 1603 grants. Stetson II has less than 20% capacity factor since coming on line.
Summers had previously been the President of Harvard, as well as a highly paid director of the DL Shaw hedge fund, which contributed heavily to Obama and was a heavy investor, along with Madison Dearborn, in UPC/First Wind. Madison Dearborn, of Chicago, was also a major backer of Obama. So, connect the politically favorable dots. Summers helps to bail out Shaw's & MD's investments in First Wind and 6 months later, Harvard University, in its zeal to be "green" signs up to buy half of the output of a wind site in a remote part of Maine.

It is disgusting that one phone call by a highly placed influential individual commits Harvard to a lousy deal to bail out an unsuccessful project.  It is also disgusting that Harvard would have such blinders on in its zeal to be "green" that it doesn't make a fact based, smart decision.  But most disgusting is Harvard's role in promoting the destruction of a gorgeous piece of scenic Maine, with loss of hundreds of acres of carbon sequestering forest, fragmentation of wildlife habitat, alteration of the mountain hydrology, and placement of bird and bat killing 389 ft tall machines that are out of scale and out of place, withinin the viewshed of the jewel of the northeast, Mt. Katahdin in nearby Baxter State Park.  Harvard should be ashamed!

Stetson II from the air: 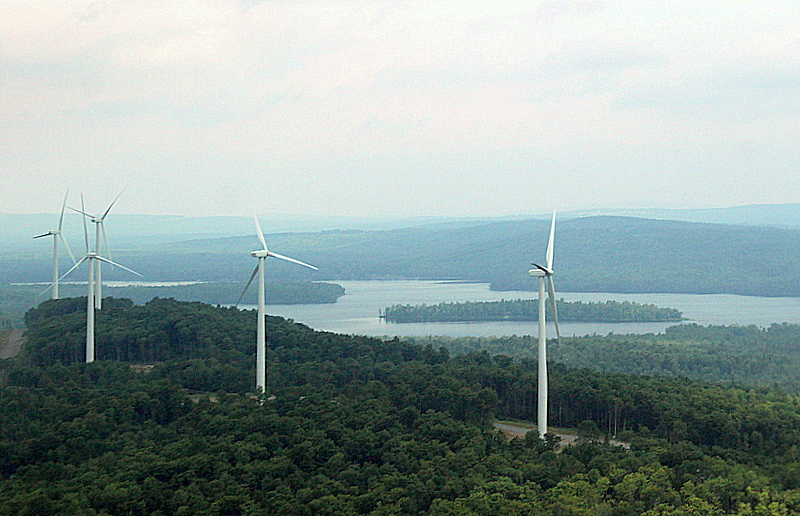 Comment by Kathy Sherman on October 6, 2014 at 11:14am
Brad, was the wind actually blowing/turbines not just free-wheeling in the picture of Stetson above, because the rotors appear to be facing every which way and those on the left appear too close together (wake losses/sound impacts). All of which suggests the wind resource is ill-suited and the site design poor, confirmed by your capacity figures. It also adds to the visual disharmony destroying the dramatic vista. None of this will be redressed by simply increasing rotor swept area & height as proposed in Hancock.
Do you know how far away the photo was taken?

I appreciate your explanation of the Harvard connections with this project. What was skimmed over in Crimson and not addressed in the excellent comments is the student movement for divesture. At the Climate March and PR from numerous colleges, including my alma mater, divesting and "green branding" of electric supply is the current gen's anti-war, anti-South Africa, etc., and a lot of the 'carbon-tax'/ "clean" economy is doubtless the "brain child" of Harvard, including the tax equity parts. Harvard invested closer to home contracting for the Renewable Energy Certificates from Hull MA's first grid-scale wind turbine and don't forget George Baker and Fox Island Wind, recipient of Rural Utility Service loan and I don't know what agency paid for the expensive cable to the mainland so that generation from the turbines could profit from federal incentives.

An aspect which the Crimson brought up in a very confused manner was the issue of wind generators being "forced" to sell their electricity at negative prices. This is false -- they could shut them down, but don't because they want the PTC. And if they did so, it would undermine their arguments about "price suppression".

My last queestion is if wind generation in Maine, or anywhere in forested or coastal northeast is so wonderful, why doesn't Harvard just invest its professors' pension funds and the endowment that allows those climate-concerned students to attend, live and learn in energy-intensive buildings and perhaps model health and economic forecasts with energy-hungry supercomputers directly rather than by securing project financing by power purchase agreements pretending that the electrons generated in Maine actually impact service in Boston or reduce carbon emissions from power plants in MA?

Still, don't blame this all on Democrats - Bush II invented the RPS when he was governor of the state with the best wind resource/available land area to benefit by policies such as PTC. The governor of MA/presential contender Romney also did nothing to deter the investment of MA ratepayer funds in planning wind energy growth in northern New England. The footprint is definitely there for FIW, but with CT ratepayers, we paid for mapping all of New England. I don't know the history of RGGI.

I do not mean to sound as cynical about student concern for the climate either, I just wish that they would take a more "global" and thoughtful perspective and think about where their consumer products and books are coming from, their cars and tires, the NSA data collection that keeps them "safe", and, on the other hand, the importance of intact ecosystems and nature-centered living.

I don't know why our website does not show the photo of Stetson II.  If you click on the blank space, it comes up!  Sorry about that!

Great letter Brad and thanks for the link. I will request that the HC do not remove your letter.

The censor at the Harvard Crimson didn't like what I posted and took it down.  One of our wind warriors emailed me that they couldn't find it.  I scoured the comments and it was not to be found.  So, being a stubborn Mainah, I re-posted it tonight, with this extra paragraph as a lead in:

"I posted this comment yesterday. It is about Harvard University and it's renewable energy goal. It is about wind power. It is about shady politics and mis-use of influence. It belongs with this story in the Harvard Crimson. Yesterday, it was removed. It does NOT deserve censorship! Is the censor at Harvard Crimson afraid of the truth?"