The wind industry wants us to believe that Maine is the "Saudi Arabia of Wind". While they've told us this repeatedly, they've also told the same exact thing to citizens in many other states as part of their tired and desperate playbook.

The purpose of telling a state that "you are the Saudi Arabia of Wind" is to stimulate the "greed center" of the brain. Often when turned on, common sense goes out the window, visions of sugar plums dance in the head and one drops their guard. It's like that email from Nigeria that tells you you are wildly rich -- if you would just be so kind as to email back with your bank account number. Confidence gaming 101.

The reality is that Maine has an extremely below average onshore wind resource.  This section will demonstrate that conclusively.

After enlarging the map, you will see that the vast majority of onshore Maine is colored white, indicating an official designation of POOR. A relatively small percentage of the map, perhaps 10%-15% is tan and is considered MARGINAL. Perhaps 1% is yellow and considered FAIR and far less than 1% is pink or purple, meaning good or excellent. Now, take a look at the same map for the total U.S. below and notice how poorly Maine compares to places like the Great Plains in terms of percent coverage, wind intensity and absolute size of the windy areas. Again less than 1% of Maine is considered good. When one looks at the U.S. map at 80 meters, Maine is still a terrible contender in wind resource. 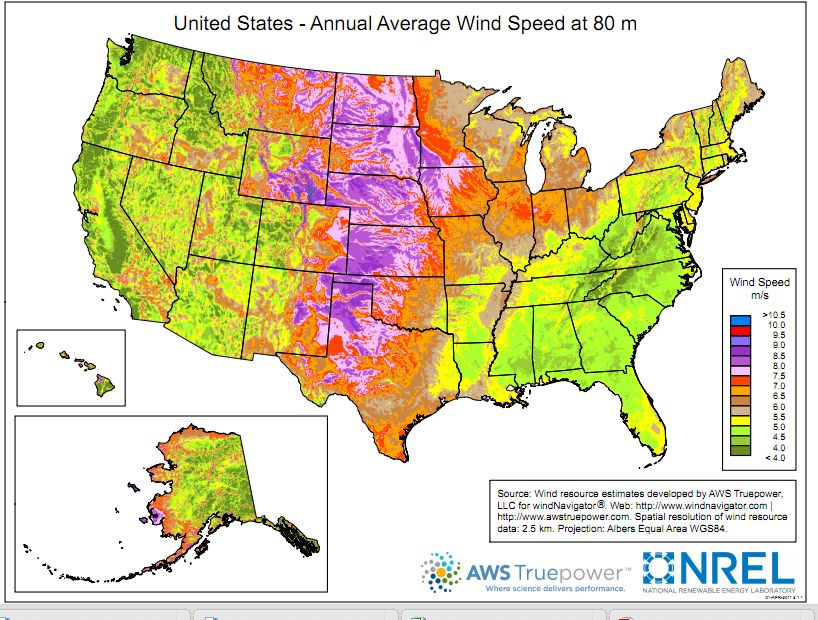 For a laugh, Google "Saudi Arabia of Wind"

I was curious who might have first uttered that tired phrase. Try it. The results are hilarious (see them below). Pretty much every state and country that has an outdoors has gratuitously been called that by Iberdrola or some other developer.

Not unlike "We think you might have the bank account number we've been looking for. Just send it to us and we'll let you know if you're the winner, you sucker."

Reply by Long Islander on January 24, 2010 at 4:34pm
Delete
The Gulf of Maine is the Saudi Arabia of Wind - Angus "I guess I stole that line" Kinghttp://www.gmri.org/about/eventsItem.asp?ID=96


“North Dakota is the Saudi Arabia of wind. This new project is a significant step forward in our effort to harness that power to boost North Dakota’s energy portfolio and help our nation tap into its own resources,” Senator Byron Dorgan (D-ND) said. http://www.nationalwind.com/files/M-Power%20press%20release%2092107...

It has been said that Iowa is the Saudi Arabia of wind energy and by looking at a wind chart of the state one would believe that to be true.http://www.hawkeyerec.com/services/renewable_energy.php

“South Dakota is the Saudi Arabia of wind”. “South Dakota could provide 55% (or some
similar number) of the US electricity demand”. http://files.sdwind.org/2007WindEnergyReport.pdf

As it turns out, West Texas is the Saudi Arabia of wind power.http://www.houstonpress.com/2001-06-07/news/red-light-green-light/5

“Oklahoma is the Saudi Arabia of wind,
anyone who’s been outside can attest to that.”http://www.seic.okstate.edu/owpi/OkWinCharger/WinCharger/Nov_Dec_20...

Even then-Gov. Mike Johanns, speaking at the first Nebraska Wind Energy Forum, expressed his support for wind energy, exclaiming that Nebraska is “the Saudi Arabia of wind.”http://www.dailynebraskan.com/opinion/swiercek-bill-would-leave-lin...


Colorado is the Saudi Arabia of Wind http://lwvlaplata.org/files/nov-dec07voterpages1-6_reduced.pdf

Permalink Reply by Art Brigades on January 24, 2010 at 5:08pm
Delete
The heck with plastics- we should all invest in head-dresses...


New Zealand is regarded as the "Saudi Arabia of wind" and is perfect for wind farm energy production...
http://www.odt.co.nz/the-regions/central-otago/15651/nz-saudi-arabi...


The Great Plains, sometimes referred to as the Saudi Arabia of wind energy
http://www.earth-policy.org/index.php?/books/epr/Epr1_ss16


Pawlenty says Minnesota is on its way to becoming the "Saudi Arabia of renewable..."
http://news.minnesota.publicradio.org/features/2005/05/10_ap_ethanol/


Bill Richardson: "I want [New Mexico] to be the Saudi Arabia of wind, solar, and biomass."
http://www.grist.org/article/richardson_factsheet/


It calls Quebec the Saudi Arabia of wind energy.
http://ksjtracker.mit.edu/2007/07/30/canadian-dailies-wind-power-bo...


Scotland has been estimated to have 25 per cent of all Europe's wind; it is the "Saudi Arabia of wind", as Scottish Renewables, the industry association, has described it.
http://us.ft.com/ftgateway/superpage.ft?news_id=fto092020070014594296


'The United Kingdom is the Saudi Arabia of wind energy,'
http://www.guardian.co.uk/environment/2006/sep/17/energy.business


including a vast stretch of Inner Mongolia that could be the Saudi Arabia of wind power.
http://www.worldwatch.org/node/1641 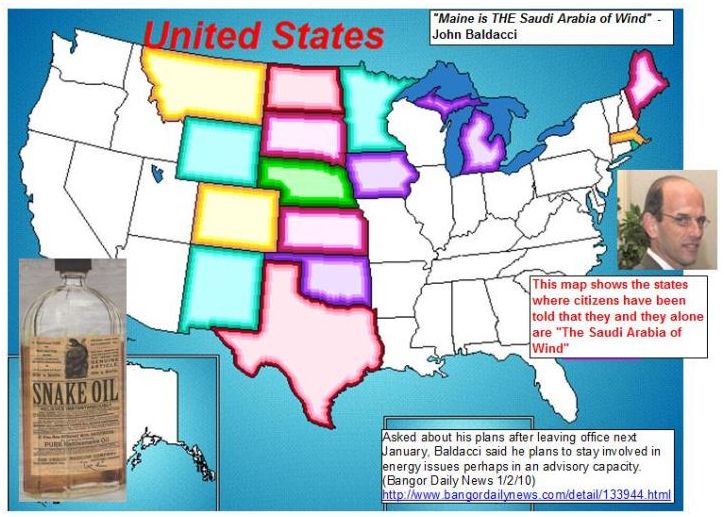 Even Angus King, one of the biggest wind cheerleaders in the state admitted on his Independence Wind website that "less than 2% of the state has sufficient wind". 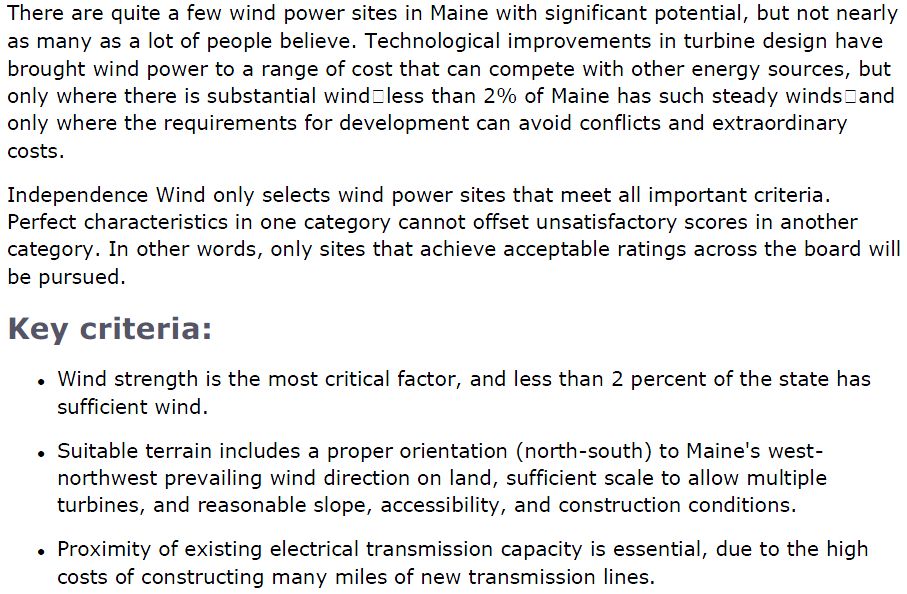 (Note: This link may now be dead)

This is NOT based on installed capacity but rather theoretical potential. We just did not get dealt a good hand when nature was giving out wind, despite what the wind shills will tell you when they have their hands on your wallet every April 15th and every monthly electric bill. 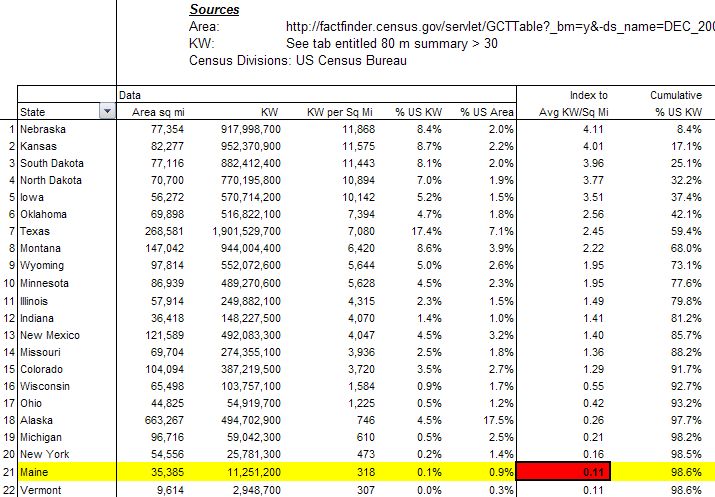 The following letter went to every Maine legislator on 5/13/11 - along with the following Excel file.

*** Copies addressed to all Maine legislators via Multiple Emails ***

A lot of "biomass" got thrown around during the Baldacci era with respect to "green" energy.
For example:

"Maine is the Saudi Arabia of Wind"
"Wind will get us off foreign oil"
"We need the CMP upgrade due to aging lines".

None of these oft repeated messages were true, but that didn't stop them from being constantly repeated via the bullhorn of the media.
I'm taking a moment here to correct the Saudi Arabia moniker by putting Maine's wind potential in proper perspective using data from the NREL (National Renewable Energy Lab).
A copy of my analysis is attached. It took me all of about 45 minutes to complete. These figures have been there all along, had anyone spent any time doing a little bit of research.
Here's the overview:
There are ten states which account for 77.6% of the nation's wind energy potential - Nebraska, Kansas, SD, ND,Iowa, Oklahoma, Texas, Montana, Wyoming and Minnesota.
These states represent only 27.3% of the nation's area. If all states exhibited equal wind energy, you would expect a state with 27.3% of our geographic area to represent 27.3% of our wind potential. The fact that these 10 states represent 77.6% of national wind potential means they exhibit a disproprtionately high potential yield. This can be stated in the form of an index number, i.e., 2.85. In other words, the 10 states have 2.85 times more wind potential than what would be expected by virtue of their size.
Now let's look at Maine.
Maine accounts for 0.1% of the nation's wind energy potential and 0.9% of the nation's area. That translates to an index number of .11. In other words, Maine has only 11% of the wind potential that would be expected by virtue of its size.
Stating the obvious, the nation as a whole has 100% of the nation's wind potential and 100% of its area, meaning the nation has an index of 1.0. In other words, Maine's .11 index means that Maine's allocation of wind potential versus area is 89% below the national average.
The correct headline is therefore: Maine's wind potential is 89% below the national average.
Unfortunately, the headline we have had to read one to many times is "Maine is the Saudi Arabia of Wind".
If one picks apart the wind industry propaganda that has the potential to persuade well meaning legislators to unwittingly sacrifice Maine's core essence, our quality of place - increasing electricity rates, transmission charges and creating cumulative impact that will likely reduce tourism revenues, one will find that almost all of this industry'spropaganda is just as false as the Saudi Arabia moniker.
In retrospect, that line about Saudi Arabia was to elicit greed and when people get greedy they drop their guard and fall for things they shouldn't. Confidence gaming 101. Just read any email from Nigeria telling you they have discovered riches they owe you - if you'd just give them access to your bank account.
Let's please go back to the very start of the expedited wind law that was never debated in the legislature and with our guard up, study every claim anew before we grant this industry unbridled access to Maine.
Thank you in advance for doing the right thing.