The ocean energy think tank suffered a blow in August with the death of founder Matthew Simmons.

The Ocean Energy Institute was founded in 2007 by the late Matthew Simmons, an internationally-known energy investment banker. The decision to close the institute was made after…

Energy program shut down after questions raised about politics, effectiveness

Stuck In The Recession With You, Wind

Wind developers love to engage in conversation about the mechanical aspects of turbines which steers people away from the truth about how utterly useless they are at grid scale . Even bad ideas can bring wealth to the game players, ( developers, a few landowners and money hungry town governments ) but this money has to come from somewhere and at some cost. The money comes from the taxpayers and the ratepayers ( you and I ) . the cost is loss of economic engine as wind forces aside the… Continue

Finally, we recognize that the linked standard offer and entitlement arrangements approved in this Order create certain obligations and risks for CMP that should be properly borne by customers rather than shareholders.  We are informed by our staff that CMP agrees to accept the obligations and risks as long as it is compensated for the financial consequences of satisfying those obligations.  Therefore, we explicitly find that any direct or…

QUIETLY, MAINE IS REDUCING OIL CONSUMPTION AND ENTERING RENEWABLE ELECTRICAL GENERATION BY TRIED AND TRUE ENERGY RESOURCE. WOOD, PERHAPS TRANSITIONAL,  PERHAPS NOT, BUT THERE IS NO WIND IN THE PORTFOLIO.
Maine’s Colby College has begun construction on a new biomass heating plant that will replace about one million gallons of…
Continue In spite of having government backing them ( Al Gore was Vice President ) and the first and best locations for wind resource, Mr. Bradley, a previous employee describes Enron's lack of success with " Green " energy:

Bradley: Enron’s green investments lost money year-by-year despite the taxpayer subsidies, so yes. The ‘green’ kick also got management off track—got the company off of a consumer-driven track onto a government-driven track. That is a bad trade even in…

Today is January 27. According to the website, the UMPI wind turbine produced a total of 22,200 kWh over the past ten days. Those days included a n'or'easter Friday the 21st and  yesterday the wind was essentially calm.  That's the way it goes with wind power.

That  power output is an average of 2,220 KWh per day. So, with capacity of 600 kW, the turbine averaged less than four hours of good wind each day.

Ideal wind whould produce 14,200 KWh - but it never happens. Thanks to…

Kick Iberdrola out of this State

Can anyone tell me why Iberdrola should be allowed to control delivery of electricity and build generation plants in Maine ? BTW, they are a foreign company very much involved in Spain's current fall towards bankruptcy.

With power purchase agreements becoming the favorite mechanism for sale of electricity from wind developments, why are they declared " priority information " and kept secret. We, the taxpayers, subsidize the existence of wind projects. This information contains pricing which helps reveal the impact wind will have on electric rates. How are we to know if wind can deliver 6 cent per kilowatt electricity if these " power purchase agreements" are allowed to be secret, Governor.

LONDON— From Wednesday's Globe and Mail

This is How Senseless Policy is Conceived: "Power Hour"

It makes people feel good, like they're doing something to save the planet.  But let's assume that this gathering will be devoid of science and scientists. Let's assume that uneducated ideologues will populate these "Power Hours" and propose all sorts of flakey ideas which will eventually become policy.  We suggest that GPCOG insist that engineering experts attend all of these meetings.

Some of those lawmakers are willing to listen. Representative Stacie Fitts from Pittsfield, who chairs the Energy Utilities and Technology Committee, says wind power could be a part of the solution to our energy problems in Maine.

Ocean Energy Institute to close its doors in one week

GE CEO has been given the reigns of our economy by the President:

This item has achieved "Innovative Award " by GE : A Cloth Windmill

How do I get this worded onto a town warrant article?

The capacity factor of a wind project depends on a number of different things and is site specific.  I cannot comment on the capacity factor of the Stetson project as I have not see those numbers, but there are several reasons why the UMPI capacity factor would be lower than that of Saddleback.  The UMPI turbine is a smaller turbine (600 kW), which is less efficient than a larger turbine,… 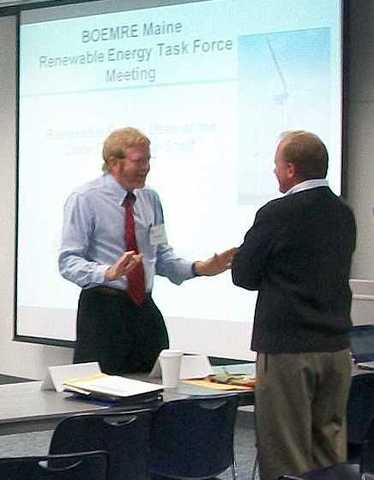 (Photo is from a meeting a month earlier)

In his 9 slide powerpoint George has a share-the-resource POV. Selling out ocean natural…

Dozens of windpower bills before Maine legislature for 2011