Based on the plan of eliminating fossil fuel plants (they emit CO2 and particulates) and nuclear fuel plants (they are alleged to be dangerous) by 2050, the existing gas, nuclear, coal and oil generating plants would be decommissioned and no new ones would be built.

This would require huge build-outs of wind, solar, and storage systems, and increased electricity supply via external ties to adjacent grids.

There is no way one can close down nuclear, oil, gas and coal plants, have 60-plus percent of NE electricity from wind and solar, and not have TWh-scale storage systems to:

2) Smooth the variability and intermittency of wind and solar, 24/7/365

3) Cover extended wind and solar lulls, which occur at random throughout the year

1) Expensive per delivered kWh, about $800/kWh in NE, with little prospect of a significant decrease. See Appendix.

4) Any electricity passed through a battery system has a loss of about 20%, which increases with aging, on an AC-to-AC basis,

The combination of above conditions would add about 20 to 30 c/kWh to the cost of any electricity passing through the batteries (such as highly subsidized, high-cost, midday solar electricity), if owner’s annual return on investment (at least 9%/y), and annual amortizing costs were included.

It would be much more economical to have pumped-hydro-storage power plants, which last 100 years, have minimal aging, and almost NEVER catch fire.

Here is an example of what would be required in New England.

A pumped-storage hydro power plant, with a large upper reservoir and a lower reservoir, could deliver a steady power output on a year-round basis.

Wind and solar systems could be used to power pumps, which would return water from the lower reservoir to the upper reservoir.

There would continue to be water flow through the entire Connecticut River, except it would be much steadier.

A very large upper reservoir could be created, if the Connecticut River had a 150 ft high dam. Large areas of land would be flooded, whole towns with people would be displaced. In the past, such displacements have been successfully accomplished in the US, China, Canada, and many other countries.

Some people would say, such displacement is OK, because we are trying to reduce CO2 emissions from evil fossil fuels to save the world from climate change.

If we assume the upper reservoir area would be 1,000 square miles, and the water level would drop by only one foot, about 52,185 MWh of electricity would be loaded onto the NE grid. See table 2

New England total electricity loaded onto the grid is about 115 billion kWh/y, or 115 million MWh/y, or an average daily grid load of 0.315 million MWh, which would be about 315068/52185 = 6 times greater than from one foot of water level drop, assuming the reservoir had vertical sides, See Note

Working Storage for All of New England, if 100% of electricity were from wind and solar

1) If all NE electricity were from wind and solar

2) If a 6-ft drop were allowed and the reservoir sides were vertical. See Note

3) To cover daily, and seasonal variations of wind and solar outputs

Comments on the Image

The image is from a prior study regarding a hypothetical NE storage balance for about 60% wind and solar, 18% imported from adjacent grids, 32% of NE hydro, wood burning and refuse burning, etc., from a prior study.

If New York and Canada would have high electricity demands and low wind and solar, exports to NE likely would be minimal.

The image does not reflect the 20% battery loss, and the 25% aging loss in year 15, which would increase the storage capacity from slightly less than 8 TWh to about 10 TWh.  See Appendix.

The storage balance must never be near zero, as shown in late-September to mid-October, i.e., a significant additional standby generation capacity (staffed, fueled, kept in good working order, ready to provide electricity as ordered by the ISO-NE, the grid operator) would be required to ensure continuous electric service; such service, needed because of the vagaries of wind and solar, would not be for free, as is the case in Germany, UK, etc.

Vagaries of Wind and Solar

Wind and solar suffer from feast or famine, throughout each day, and during the year.

They often produce too much, i.e., well beyond demand, or not enough to meet demand.

There are times, the sum of wind + solar output could be minimal for 5 to 7 days, such as on windless, overcast days, and at night when solar is zero, i.e., the upper reservoir water level would drop much more than the normal 6-ft drop.

The pumps would need enough capacity to return water to the upper reservoir to limit the water level drop.

There are times, the sum of wind + solar output would be greater than demand, i.e., the excess electricity would be used to increase the water level.

SPAIN: If wind and solar were increased much more than at present, there would be significant surpluses and deficits, as shown by the image of generation in Spain.

Each horizontal increment is 10 minutes.

The zero point is the annual average demand

Note the lack of surplus for almost 50 minutes (periods 23 through 27), during this 5-h period 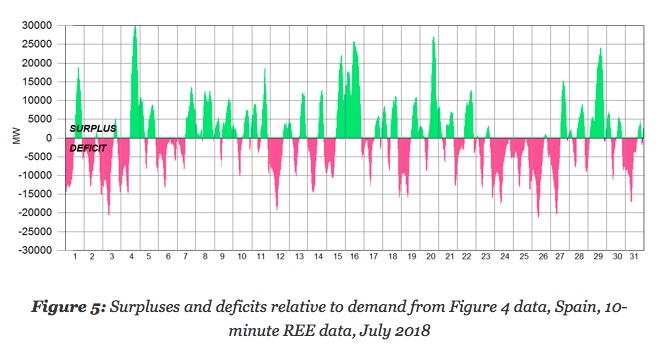 The above analysis assumes pumped-storage hydro plants would be the only measure to deal with the vagaries of wind and solar. The analysis showed a very large upper reservoir would be required.

In reality, there are multiple measures that would significantly reduce upper reservoir capacity requirements, such as:

1) Overbuilding wind and solar to partially reduce red areas, especially during low wind and solar outputs. Having extra wind and solar systems would be costly, but helpful, because they would generate some electricity, even under adverse conditions

2) Feathering wind turbine rotor blades during high wind speeds to partially reduce green areas. That would be costly, because Owners would claim they could have produced more, and would claim compensation, as in Germany, Denmark, France, Spain, Ireland, etc.

3) Increasing the capacity of connections to adjacent grids, to enable imports and exports, to partially reduce green and red areas.

This measure is not available for island grids.

If New York and Canada would have high electricity demands and low wind and solar, exports to NE likely would be minimal.

5) Flatten the daily electricity demand profile by shifting the usage of electricity to different time periods, for example, by remotely turning on/off the pre-selected electrical systems of participating electricity users, as needed,

All five measures have been practiced by Germany, Denmark, the UK, Ireland, Spain, etc., which have higher levels of wind and solar than the US.

Germany, Denmark and the UK can have their high levels of wind and solar, because they have major connections to grids with large capacities of hydro plants, such as in Norway, Sweden, and France

Ireland can have its high level of wind, because it has major connections to the big grids of the UK and France

Spain can have its high level of wind and solar, because it has a large capacity of hydro plants, and major connections to the grids of Portugal, France and Italy

The well-organized commercial and industrial sectors are spared most of the cost burden of Wind and solar to protect international competitiveness. 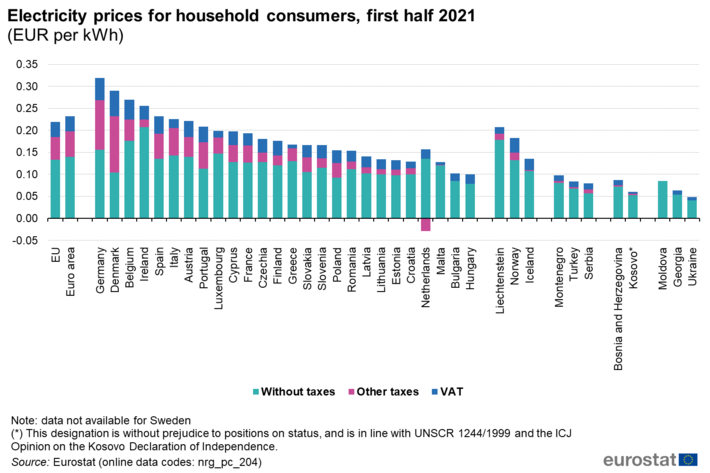 HIGH COSTS OF WIND, SOLAR, AND BATTERY SYSTEMS IN US NORTHEAST
https://www.windtaskforce.org/profiles/blogs/high-costs-of-wind-sol...