Sanctions on Russia Will Increase EU Natural Gas Prices to over $47/million Btu, Compared to US at $5/million Btu

However, certain folks in the US government are not so interested in the environment.

Russia-hating, extremists in the US State Department and US Congress have been using NATO to pressure first the USSR, then Russia.

They have been deluding impoverished, corrupt Ukraine with future membership in the EU and NATO, since 1990
They have been weaponizing Ukraine since the US-instigated Color Revolution/coup d’etat in 2014
Millions of Russian-speaking Ukrainians, mostly in East Ukraine, decided not to support the Kiev government.
The US instigated Ukraine not to implement the Minsk 2 agreements, to keep the pot boiling

The US and UK supplied huge quantities of defensive and offensive weapons, plus military training personnel to Ukraine, so it could “defend itself”

Russia made certain demands regarding:

1) NATO encroachments beyond East Germany starting in 1997 (after pledging not to do so in 1990)
2) The indivisibility of Russian and European security.

The US/UK-led NATO rejected the demands, and offered to talk about important, albeit peripheral issues.

Ukraine hot-heads floated the idea of Ukraine having an “Iron Dome” similar to Israel, and reacquiring nuclear weapons
Russia finally reacted. The result is a shooting war in Ukraine.

The EU is partially at fault, as it did not assert itself regarding the Kiev coup d’etat in 2014
The EU decided to become an aider and abettor of US policy goals regarding Ukraine in 2014, and onwards
The EU ended up being maneuvered into its present predicament, which is at variance with EU vital interests.

LNG is made by cooling natural gas to minus 260F, which reduces its volume by a factor of about 600

Natural gas is piped to a port, processed, liquified, and loaded onto LNG carriers for shipment by sea.

To receive LNG, a receiving port must have a gasification plant to convert the LNG to gas, to send it by pipeline to end users.

Many of the world’s top suppliers are maxed-out, with little capacity to produce and liquefy more gas than they are already moving.

About two-thirds of all LNG is sold under firm-price, long-term contracts, with fixed destinations.

Some major contract holders, such as South Korea, Japan and China, could redirect some cargoes to Europe, if a cutback in Russian exports creates a worsening supply crisis.

Dubai LNG Supply to EU: The reason behind the Western incursion into Syria and Qatar-funded attempts at revolution, had nothing to do with installing a democratic government, but with removing Assad's pro-Russia government, so that Qatar could safely pass a pipeline through Syrian territory, which would then proceed to the EU. Putin’s support of Assad successfully quashed the pipeline.

Which means any Qatar gas sent to the EU would be LNG, carried by LNG carriers, which are in short supply.

Qatar is getting cold feet about the LNG-to-EU strategy.

Natural gas provides about 20%; of that about 20% for electric power generation, the rest for heating and industrial processes.

NOTE: In 2020, Russia provided the following percentage of gas to Europe, by country:

* Members of the EU. 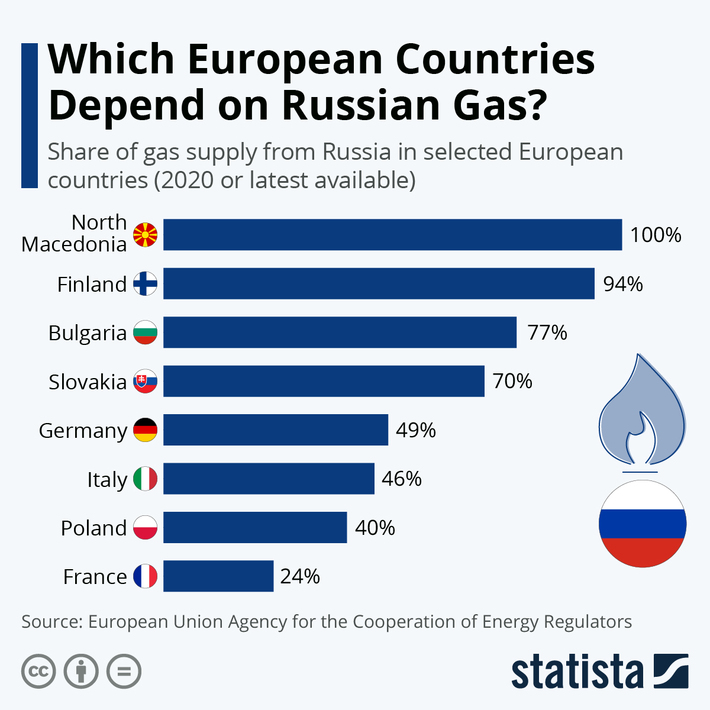 Due to increased EU energy and electricity costs, a Mercedes, or Audie, or Volkswagen, or anything else made in Europe, could suddenly become up to 50% more costly.

That condition would be in place for up to 10 years, because it would take that long to build up additional:

- Connections to existing onshore pipe systems, all while:

1) EU inflation would be off-the-charts

NOTE: The above production and infrastructure build-ups would be in addition to what is required for projected LNG world market growth

US Search for 200 bcm/y of Natural Gas Elsewhere

If Russian pipeline gas supply to the EU were interrupted, adequate quantities of gas would need to be found elsewhere.

The US stated, it is putting together a "global strategy" to increase gas production among allies, in case of a Russian invasion of Ukraine.

"The State Department, led by Senior Adviser for Energy Security Amos Hochstein, has in the last six to eight weeks been putting together a global strategy exploring contingency options to redirect and increase gas supplies from different parts of the world, a senior US official said," CNN reports Sunday. “This has included talks with firms in Europe, the Middle East, North Africa and Asia”.

The next section shows how unlikely would be this “global strategy”

Up to 40% Additional LNG Carrier Loads, if Russian Pipeline Gas Supply to Europe were Stopped

The only beneficiaries are multi-billion companies that supply the wind and solar systems, and Utilities, that sell much more high-priced electricity due to implementing the "electrify everything" mantra

Everyone else gets screwed with higher taxes, fees and surcharges, and higher household electric rates, as happened in Denmark and Germany.

Those people are told to grin-and-bear-it/sacrifice, because they are “fighting” climate change, a la Don-Quixote tilting at wind mills, while the RE subsidy-collecting elites cruise around in private jets and yachts.

Historically, the EU has imported very minor quantities of LNG, because LNG prices are about 25 - 30% higher than pipeline gas bought from Russia, under long-term contracts.

That will always be the case, due to cost differences of applicable technologies.

Brussels RE bureaucrats, likely with little hands-on experience in the energy sector, have urged EU countries not to sign long-term gas supply contracts with Russia, because that would send the wrong “virtue signal” regarding “weaning the EU off fossil fuels”. Just google, if you find this incredible.

As a result of Brussels RE bureaucrat myopic decisions, EU spot prices for gas have become “volatile”, i.e., about 5 to 10 times long-term prices

Russia made sure to reliably provide pipeline gas, to clients with signed long-term contracts, as confirmed by Brussels, Germany, Turkey, etc.

Russia has no contractual obligation to supply gas to the EU spot market.

This was known by Brussels RE bureaucrats, prior to their myopic decisions.

There would be a gigantic, additional strain on the world’s LNG system, which would send spot prices to unprecedented levels for many years.

At present, Europe lacks the capacity to receive and gasify that many carrier loads.

At present, there is a significant shortage of large-capacity LNG carriers

Germany is currently buying pipeline gas from Russia, under long-term contracts, at about $280 per 1000 cubic meter, or $7.93/million Btu. For comparison, US long-term pipeline gas prices for new contracts are about $5/million Btu

There is no way Germany could shut down coal and nuclear plants, and have more wind and solar, as part of its multi-decade ENERGIEWENDE, without having much more low-cost pipeline gas from Russia

The additional gas is planned to arrive, via the completed Nordstream 2 pipeline under the Baltic Sea, from Russia to Germany.

Germany would have to buy very large quantities of LNG, at very high spot prices, from whatever unstable countries.

The ENERGIEWENDE, and fighting climate change, would have to be on the back burner for up to 10 years. On the heels of my comments on the Ukraine issue, Willem Post this morning sent me this extremely perceptive article about it.

Nice to be reminded of Mackinder’s Heartland thesis, which I first encountered as a college sophomore. Hope this will add to your understanding.

The other thing to mention is, since the end of World War II, Western Europe’s military power has, de facto, been that of the United States.

Although each nation has a token military presence, it is dwarfed by the US military juggernaut.

One of the primary consequences of this has been European nations have only spent about 1% of their GDP on their military, allowing them the latitude to fund:

1) R&D in consumer products, cars, appliances, etc., and export high-quality, desirable products all over the world.

2) The myriad social services, such as nearly free higher education and low-cost universal healthcare, western Europe has been known for.

About one third of the US budget has been allocated to military spending (often more), leaving much less nearly-free higher education and for “social safety nets.”

All of this has had political and social consequences in the US that are now coming home to roost.

If you want RELIABLE mail delivery, we will NOT be using EV tricky trucks, that have MUCH GREATER OWNING AND OPERATING COSTS THAN EQUIVALENT GASOLINE VEHICLES.