Why Have the Maine Media Failed to Report Former Governor Baldacci is on the Board of Avangrid? (Iberdrola) 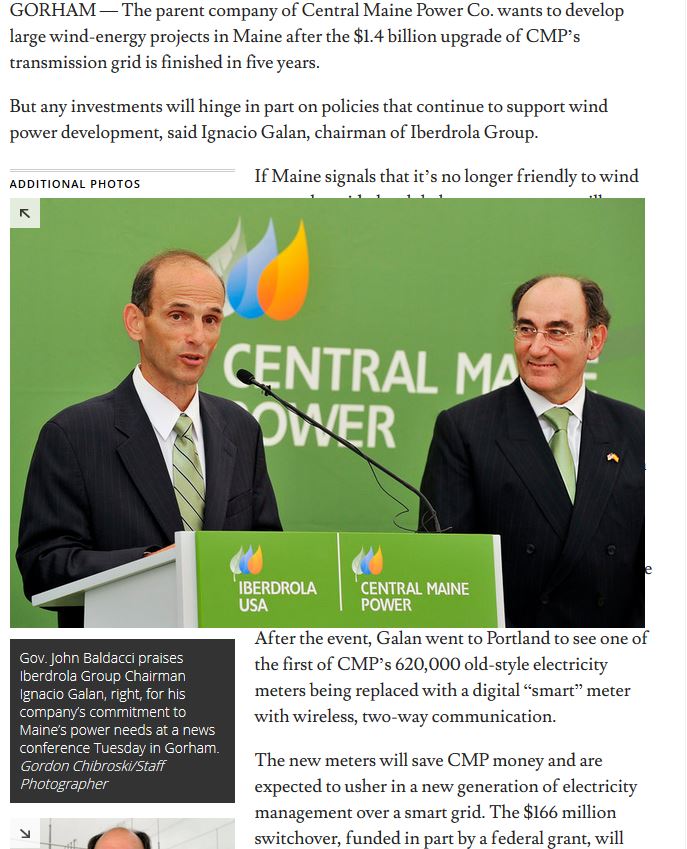 After all, Governor Baldacci is the person who jammed through the heinous Expedited Wind Law in Maine which…

Given Quebec’s excellent wind resource and the willingness of dozens of its communities to host wind farms, incorporating wind energy into…

Both Senators want to decorate our mountains and coast with wind installations and transmission - but somehow the article missed this part. How can you be committed to outdoor recreation and support these hideous contraptions? Answer: You can't.

From Maine’s lengthy coastline to its vast forest — and everywhere in between — the outdoor recreational economy is a major driver that injects $8.2 billion in spending to the state…

SunEdison Sets Bankruptcy Exit With Nothing for Shareholders

Just more painful proof that wind companies can't be trusted and there is no such thing as too much financial oversight when these con-artists attempt to operate in Maine. Where is the reaction from the Maine legislature to SunEdison's collapse, given Maine was ground zero for First Wind/SunEdison's wind installations?

SunEdison Inc. won final approval for a bankruptcy plan that will leave what was once the world’s…

Property and wind turbines: A missing point in the discussion

Wind and Solar Energy Are Dead…

The backlash is so fierce that Big Wind has begun suing small towns to force them to accept wind projects. ......The rural resistance to the land-devouring, subsidy-fueled sprawl of Big Wind doesn’t fit the narrative – endlessly repeated by the Sierra Club, Natural Resources Defense Council, Greenpeace and their myriad allies in the liberal media — that wind energy is “green.” Nevertheless, the numbers tell the tale. Since 2015, about 170 government…

Maine needs to wake up and do the same for both lake and ocean shores and all of the interior views which are the foundation for our tremendously vital tourism industry. If the so called representatives, so called environmental groups and media were not on the take, wind power in Maine would not have a chance.

The Kremlin has secretly financed environmentalist groups across the globe

Russia’s Financial Support for Anti-Fracking Groups Is No Coincidence

Aware that fracking could devastate the Russian economy, the Kremlin has secretly financed environmentalist groups across the globe.

The wind farm the Arena bastion of Isola di Capo Rizzuto in the province of Crotone and two other companies were impounded from Pasquale Arena on the orders of anti-mafia prosecutors in the Calabrian city of Catanzaro, finance police said.

The assets were initially seized in March from Arena and permanently confiscated on Monday after further investigations indicated they were mafia controlled, according to police.…

Few may be aware of the aggressive role the State played in pushing the project on unsuspecting citizens, and the enormous cost of taking it down.

A survey carried out on behalf of the John Muir Trust (JMT) found that 55% of respondents were “less likely” to venture into areas of the countryside industrialised by giant turbines, electricity pylons and super-quarries. ...The poll has rekindled calls for Scottish ministers to increase protection for wild and scenic areas that, it is argued, will protect rural tourism businesses.…

Certain members of the environmental movement are being complicit and in some cases the rank and file are just being duped.

U.S. Senate: How a Club of Billionaires Control the Environmental Movement 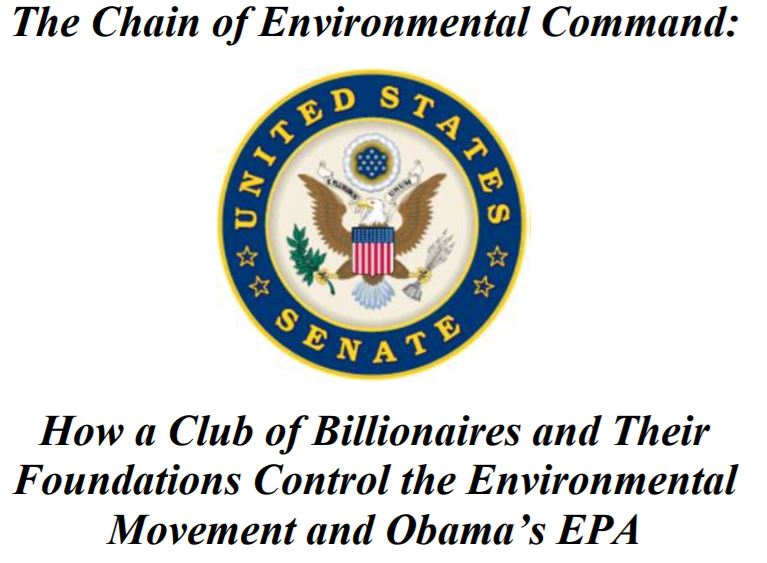 The Billionaire’s Club gains access to a close knit network of likeminded funders, environmental activists, and government bureaucrats who specialize in manufacturing phony “grassroots” movements and in promoting bogus propaganda disguised as science and news to spread an anti-fossil energy message to the unknowing public. Not only is the system incredibly…

Allegations US Environmentalists May Have Secretly Taken Russian Cash

“The Sierra Club, the Natural Resource Defense Council, the League of Conservation Voters, and the Center for American Progress were among the recipients of Sea Change’s $100 million in grants in 2010 and 2011,” The Free Beacon reported, adding that as “many as 20 companies and investment funds with ties to the Russian government are Wakefield Quin clients.”…

Emily Green, staff attorney for the Conservation Law Foundation in Maine, said her group is concerned that the governor will nominate someone who will take a hard line against proposals that advance renewable energy.

“We would oppose the nomination of someone who’s unlikely to work toward a clean energy future,” she said.…

Someone caused $25,000 in damage to a wind turbine on the Piikani First Nation in southern Alberta by shooting it multiple times with a high-powered rifle, according to police.

Piikani RCMP asked the public for help Monday in identifying the culprit.

They said a technician discovered bullet holes while doing service on the Weather Dancer wind turbine on June 12.…

BDN: Darkness as a tourist draw? Believe it

St. Clair, whose family donated more than 87,000 acres of northern Maine land that was designated a national monument a year ago, said he and others reached out to the International Dark-Sky Association, which works toward protecting places where traditional dark skies still exist. The group also certifies (after a two-year process) sites that qualify as officially dark.…

General Electric Co. was one of several major corporations accused by European regulators Thursday of anti-trust activity, following the European Union’s major action against Facebook for giving misleading information during a deal review.

The Portuguese scientist is an expert on infrasound, the energy created by sound which humans cannot hear, and low frequency noise, the sound generated by wind turbines.

As long as "free money" is there for the taking, we will keep seeing articles like this one. The problem is that free money is confiscated from taxpayers and ratepayers. As soon as free money disappears, we will no longer see these articles.