Given Quebec’s excellent wind resource and the willingness of dozens of its communities to host wind farms, incorporating wind energy into electricity transmission projects has come to be a cost-effective solution. Thanks to Eric Tuttle for finding this.

In Maine, wind energy development has stalled after years of growth, because the transmission system here has reached its limit for interconnecting major new generation sources to the regional power grid. A bid by Central Maine Power, says CEO Sara Burns, could change the picture.

“If we win one of these, and we build this — I’m going to call it [a] platform — the next solutions are easier, because we’ve created at least one stronger line,” she says.

Following the passage of An Act Relative to Energy Diversity in 2016, Massachusetts issued an RFP to bring up to 9.45 terawatts of clean energy power into the state. CMP submitted their proposals Thursday, the final day of the RFP.

The first proposal, the New England Clean Energy Connect, would link the New England grid with a Canadian hydroelectric company, Hydro-Québec. A new transmission line would begin at the Canadian border in western Somerset County and run 145 miles to a new AC/DC converter station in Lewiston. That line, in addition to small improvements to other Maine facilities, would deliver 1,200 megawatts of power to Massachusetts.

The second proposal, the Maine Clean Power Connection, would partner CMP with NextEra. The line would begin at at a new substation in Skinner Township in western Somerset County near the Canadian border and run 140 miles to Lewiston substation. That line would deliver between 460 megawatts and 1,110 megawatts of clean energy from a collection of wind, solar and storage facilities in eastern Canada and western Maine.

Of course not a word about this that we could find in the Massachusetts news outlets, although there's lots of news there about Justin Bieber, sports, beer and restaurants. Meanwhile, Mass-folk, the Press Herald reports that the approximate billion dollar cost would be paid by Massachusetts electric customers. Similarly, there's never a word in Mass or Ct about how northern New Englanders are furious about wind for southern New England being planned beyond their backyards in ME, NH and VT.

It would carry hydropower from Quebec to Massachusetts under a plan that's competing with others in New England for developing clean-energy projects......The 145-mile line would follow a corridor owned by CMP from Beattie Township, on the Canadian border north of Route 27 and Coburn Gore, through Farmington and Jay to Lewiston, where it would connect to the regional electric grid.........It’s also possible that a similar line being proposed by CMP and a partner could carry power from new solar and energy-storage projects in western Maine, as well as wind turbines on both sides of the border.

This may be a driving force behind part of this proposed project of destruction of Maine.

Probably even Cianbro does not want this size of a project coming into Pittsfield, ( the point where the gold  & green were to meet blue.)

It is obvious that they have now found the path of what they figure to be the path of least community resistance. Or least expensive payoff.

Comment by Eric A. Tuttle on July 27, 2017 at 12:01pm
Maybe CMP has changed its older (green) course to the Pittsfield location due to some resistance by landowners on the MEPCO project (orange) Then maybe they are hoping to pick up more wind turbine lead in transmission lines. I believe R McDonald stated last year, 1200-1400 foot ROW was being cleared. 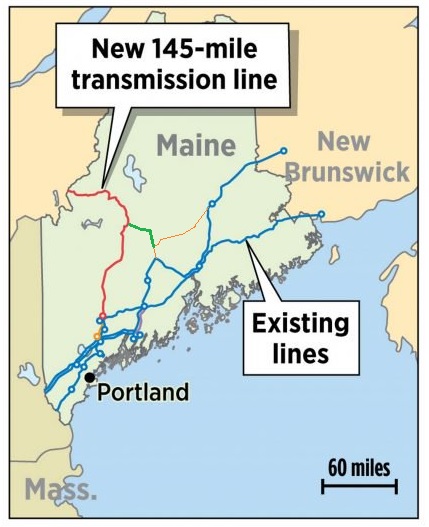