Maine board sets stage for rejection of $100 million wind project

The Bowers Wind Project would have an adverse impact on Downeast’s scenic lakes and the people who use them, members say.

The board’s action on the Bowers Wind project, proposed by a subsidiary of Boston-based First Wind, sets the stage for a vote next month in which the state of Maine, for the first time, would formally reject plans for a major wind energy project.

Bowers Mountain is in a region that includes the fabled fishing mecca of Grand Lake Stream, and the chain of lakes that attract sportsmen from around the country. Guides, some camp owners and other people who value the remote, forested setting and the dark night sky bristled at the idea of turbine towers with flashing lights, visible from far off ridges. In its latest configuration, each turbine tower would stand 450 feet tall from the ground to the blade tip.

“It’s widely recognized that beauty is in the eye of the beholder,” Juliet Browne, First Wind’s lawyer, remarked at one point. 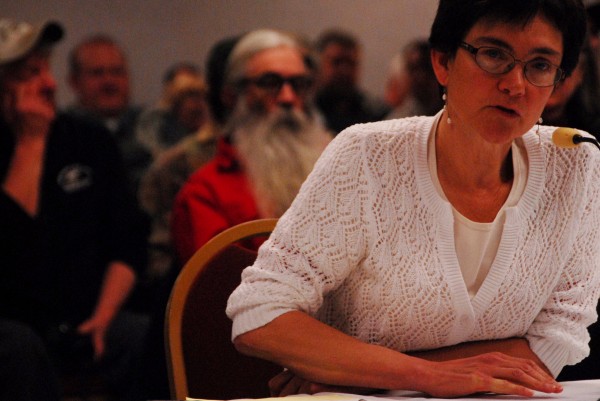 First Wind attorney Juliet Browne argues for her client at a Board of Environmental Protection appeal hearing in Augusta on Thursday.

AUGUSTA, Maine — State environmental officials have recommended that the Board of Environmental Protection reaffirm the denial of a proposed $100 million, 16-turbine wind-to-energy site in eastern Penobscot County, officials said Tuesday.

Maine Department of Environmental Protection staff members Jessica M. Damon and Mark Bergeron advised the appeal board in a 12-page memo dated this month that the proposed 48-megawatt facility would have too negative an impact on the views of several lakes and..., the site of the proposed development.

Down East wind project to go before Board of Environmental Protection

The board will decide whether to reverse a decision rejecting turbines for scenic reasons.

“I think it’s going to be really hard for a board to reverse a recommendation by an agency that spent the better part of a year researching this,” Campbell said.

The staff of Maine's Board of Environmental Protection has completed its analysis of the record in the matter of Champlain Wind LLC's and Bowers Mountain LLC's appeals of DEP's 2013 denial of a permit to build the Bowers Mountain Wind Project.

They have recommended
that the BEP affirm the denial!

And more information at: http://www.ppdlw.org/

Gary and Kay  - We can't thank you enough for your careful diligent ability to carry this fight against the Bowers Proiect to a successful end - NO TOWERS ON BOWERS!!!

(Augusta, Maine) The Board of Environmental Protection (BEP) held a meeting today in Augusta, Maine to review the denial First Wind's Bowers Wind Project by the Maine Department of Environmenal Protection (DEP). After a long day of testimony and deliberation, the BEP voted 4-1 to move closer to a "likely rejection" of the Bowers Wind Project. We are happy to report an excellent showing by our friends and allies. CLICK ON THE VIDEO for a quick pan, revealing a room JAMMED with industrial wind foes. Here's a good article by theBANGOR DAILY NEWS.

First Wind has managed to install their people throughout ME govt in clear conflicts of interest..bend the truth like  a pretzel repeatedly...permitted to build wind farms with no way to prove financing ...kill birds..and the AG never investigated before.

I've been reading the thread below. Count me as one of those who thinks it's very bad PR to publicly display disunity. We're all in this together. To quote Benjamin Franklin, "We must all hang together, or assuredly we shall all hang separately." Kudos to EVERYONE for their great work.

I suggest that everybody watch this --- http://bit.ly/1iyK8Kt --- and then explain the political logic of trashing FOMM. In my opinion, that’s the LAST thing we need in the fight against industrial wind. Purists and absolutists win battles here and there, but they don't win the war. Anyone who opposes industrial wind in any way has my unqualified support. I’m with Martha Thacker, Whitestone_Willy and Mike DiCenso. United we stand.  I've never talked with Chris O'Neal but I have Rand Stowell.  His group has answered the complaint and provided all the documents to the attorney general to prove FOMM is doing business by the book. To compare hopeless Saddleback to hopeful Bowers is apples and oranges. FMM fought Saddleback for 4 or 5 years, and they lost every time, 4 permit acceptances.  The deck was stacked.  Bowers has won every time.  3 going on (knock wood) 4 wins.  Same issues: scenic impact but different scenic resources. Different everything.  FOMM was able to win lower noise limits at Saddleback.  They won a smaller windfarm.   I personally have talked with people living around Saddleback and Webb Lake who would have got NOTHING when Saddleback got built because the permit was granted years ago.  FOMM stuck up for them and gave dozens of homeowners a chance to get property value guarantees and compensation for harm. Some people even had their homes bought for way above market value.  Saddleback Wind had to deal with all those people because of FOMM.  Is it hard to beat a wind project? Of course.  That's the law.  Just look at the record:  wind is batting about 900 in Maine.  FOMM paid all the legal fees and noise studies for those local people and lots of those people didn't even know FOMM was working to protect them.  Rand Stowell lost huge property value himself.  Anyone who would denigrate his heroic efforts all these years needs there ears boxed.  We should be building a statue of Rand.  And his organization dragged out a hopeless case to the very end hoping the tax credits would expire.  So he let a rogue committee member go and now the rogue is looking for revenge by smearing the great work that FOMM has done and continues to do. Lots of wars are won after losing many battles within those wars.  Rand got off the battlefield after saving as many of his comrades as he could.  And his group is still alive and fighting the war harder than ever.  Look at all they have done.  Close ranks and get on board or get off.  The windy industry is too powerful for us to be fighting internally.

Martha - This is not First Wind or the Lewiston Sun getting after FMM This article was generated by reviewing Court documents files in Franklin County by the AG. And it was not instigated by First Wind. There are many individuals who have donated to FMM who are very angry about recent actions by Chris and Rand. We will not know the outcome of the investigation for months But I personally do not think it will please many wind warriors who have worked tirelessly to combat wind.

When ME got their 19% hike in electrical bills...not one ME newspaper thought that was worth reporting. BDN transcribes for business and govt. with a footnote / bone thrown to opposition at the very bottom of it's articles. So if the Lewiston Sun is trashing FMM , Rand and Chris...my first reaction would be that the group is making a difference. Desperation call by First Wind and all because the tides are finally turning against them.

I agree with Mike DiCenso - all hands on deck. United we stand.

Please no trash talking here. This is not the place.

All I know is what I read in the Lewiston Sun - AG's office investigating FMM, Rand Stowell,Chris O'Neil Innocent until proven guilty but it breaks my heart that people legitimately donated money to a group to fight wind - As PPDLW has fought wind and the fight was abandoned without consulting those donors  We have a huge battle to wage! Many have been waging it for years - We need to get the truth out - and not delivered by TURNCOATS!!