Following the blatant theft of an election from the American people by the beyond crooked establishment, is it any surprise that the hoax of manmade climate existential emergency is now taking on this powerful official taxing authority which has the express purpose of harming the U.S. economy while handing a big victory to Communist China and Russia? Nice to see her background at the Fed. Now there's an organization we can trust. Is it any surprise that the establishment is such a tight knit club that Raskin is married to Impeachment Manager Rep. Jamie Raskin?

Ms. Yellen is looking to a veteran of the Obama administration, Sarah Bloom Raskin, as the leading candidate for a new senior position that would head a new Treasury climate “hub,” according to people familiar with the matter. A former deputy Treasury secretary who once worked alongside Ms. Yellen on the Federal Reserve Board, Ms. Raskin has warned in interviews and speeches that U.S. regulators must do more to strengthen the financial system’s resilience to climate risks.

The move is part of the Biden administration’s effort across many government departments to address climate change and its impact on various industries. In two early moves, the administration rejoined the Paris climate accord and suspended new oil and gas leases on federal land. Infographic: How the CCP Seeks to Control America

Guests: Dr. Shiva, Lt. General Thomas McInerney, Mike Lindell and Mary Fanning. Topic: General McInerney joins us to give his thoughts on the docuMovie Absolute Proof as it approaches 100 million views globally in under one week.

Trump ‘Plans to Stay in the Arena"
Former White House senior adviser Stephen Miller, who helped craft Trump’s immigration agenda, is looking to push a group of lawyers to file lawsuits “against some of the radical executive orders that are coming out of this new administration.

This is a repeat of the same scheme that was caught a decade ago. I think it was Diebold machines last time. But its the software, not the machines. The software can be preprogrammed to behave one way during testing and another way during voting and/or tabulation. This vote corruption stuff needs to be stopped. Someone is behind this and it looks like we won't know who until its too late.

People need to wake up!!

NEW HAMPSHIRE; An Urgent Job for the New Hampshire Legislature

The Legislature of New Hampshire became Republican, because the “activist student vote” was absent.
They likely voted in their own states.

Strictly regulate the circumstances and methods of COUNTING the votes.
None of the counting machines should be programmable by insiders and outsiders
None should be connectable to the internet.
None should have an insertable electronic card

Abolish most absentee voting.
Do not allow out-of-state students to register and vote. They would not be “deprived”, because they can, and should, vote in their own state.

NOTE: The Legislature of New Hampshire became Republican, because the “activist student vote” was absent. They likely also voted in their own states.

The only reason this fraud was revealed is because St. Laurent challenged the count.

Also note the 99 votes falsely credited to him, which were taken away, as a result of the recount.

The thinking of the vote COUNTERS must have been: Heh, this is a close race. Maybe we can flip it.

Who was holding back votes so they would not be counted in a timely manner? See URL

CYBER WARFARE ATTACK ON US ELECTIONS BY FOREIGN COUNTRIES

This article includes a long video, which I watched.

Mike Lindell describes the results of Election data analyses, performed by cyber experts, who have decades of applicable experience.

I very much urge you to watch the movie-length video.

It is a true REVEALER.

It was released on February 5

Two days later, about 10 million people had looked at it.

China performed 60% of the hacking transactions

China took away many votes from Trump. See tables 1 and 2

Biden became the FIRST President, who is ENTIRELY IN CHINA's POCKET

Play by Chinese Communist Party rules, or else 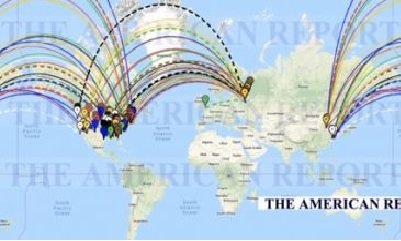 The transaction records are available to people who manage the A-to-Z communication systems.

They were made available to various cyber experts, who shared them with Mike Liddell, who had the movie-length video made.

Transaction records reveal most of the voting machines were connected to Secretary of State servers and to the internet.

Transaction records reveal China actors were involved in 60% of the cyberattack events.

The other 40% were from other countries, including Iran, Iraq, and multiple countries in Europe.

The transaction sheets are displayed starting at about 1:35 minutes into the 2-hour video., including a MUST-SEE, ASTOUNDING, real-time visual display

Here are the headings of a list with many transactions.

Line 1 shows the following information about the transaction:

- ID source; a unique identifier of the computer used for hacking

- Type of entry; using 1) credentials (illegally obtained), 2) breaking the firewall, or 3) both

- Success first time; yes or no

- Log trace; record of multiple attempts until successful, or not

Remember, it took months by hundreds of cyber experts to plan and implement many cyber attacks during a few days in November.

There likely were trial runs to make sure the set-up would be working.

The NSA, DOJ, FBI, CIA, etc., were not aware foreign countries “throwing” the election to Biden? It seems incredible.

Remember, all that is in addition to the various other fraudulent “irregularities” that took place, as described in this article, and in the below four articles. See Appendix.

US Government Awareness of Pre-meditated Hack Attacks of Elections

Apparently, the US government has been aware of such cyberattacks on US Elections since about 2015, according to cyber experts interviewed in the video.

The US government is also aware the cyberattack during the 2020 Election period was the most intense ever.

NOTE: The US has 3,143 counties, or county-equivalent political entities. Most of the hacking occurred in the counties of swing states

NOTE: Even though the Departments of the Secretaries of State, in swing states, have erased computer files of counting machines, or shredded ballots, or whatever, to hide any forensic tracks, they did not know, or did not know how to change/erase those tracks in the INTERNET server complexes.

In Germany, there is a saying: Lugen haben kurze beinen; lies have short legs.

Table 1 shows the first 30 line-items on one computer transaction readout.

There were at least 1000 such line items

The computer hacks were aimed almost entirely at the six swing states.

Table 2 shows the total of just 30 line-items, and the margin by which Trump lost each state.

Trump would have won Arizona, Georgia, Pennsylvania, and Wisconsin, and be PRESIDENT, based on just 30 line-items!!!