Across the world, all wind energy mortality research and reporting is nothing but an exercise in deception. It has been this way for decades, with the most criminally fraudulent of all this fake research, taking place in the UK.

Scotland has over 6700 MW of installed wind energy capacity and has never reported a turbine related golden eagle fatality, even though they have the same large wind turbines in eagle habitat that can be found here in CA. Their fraudulent research is also claiming another impossible feat, that 508 pairs of golden eagles are still living in about half of their former range in Scotland.

All this is a big brother lie and it is a "green" mafia lie. What all these corporate/government fraudsters are not telling the public is that there are probably not even 150 pairs left and over the years with hundreds of golden eagles having been killed by Scotland's wind turbines.

The reality is that Scotland is smothered with wind energy and most of it is located in golden eagle habitat. For a reality check of what these turbines do to eagles, I have provided an image showing an area of what is the best available golden eagle habitat in CA. It is an area about 150 miles by 50 miles or a region about ¼ the size of Scotland. In this region there are about 1000 MW of installed wind energy located on the outer edges of all this golden eagle habitat. 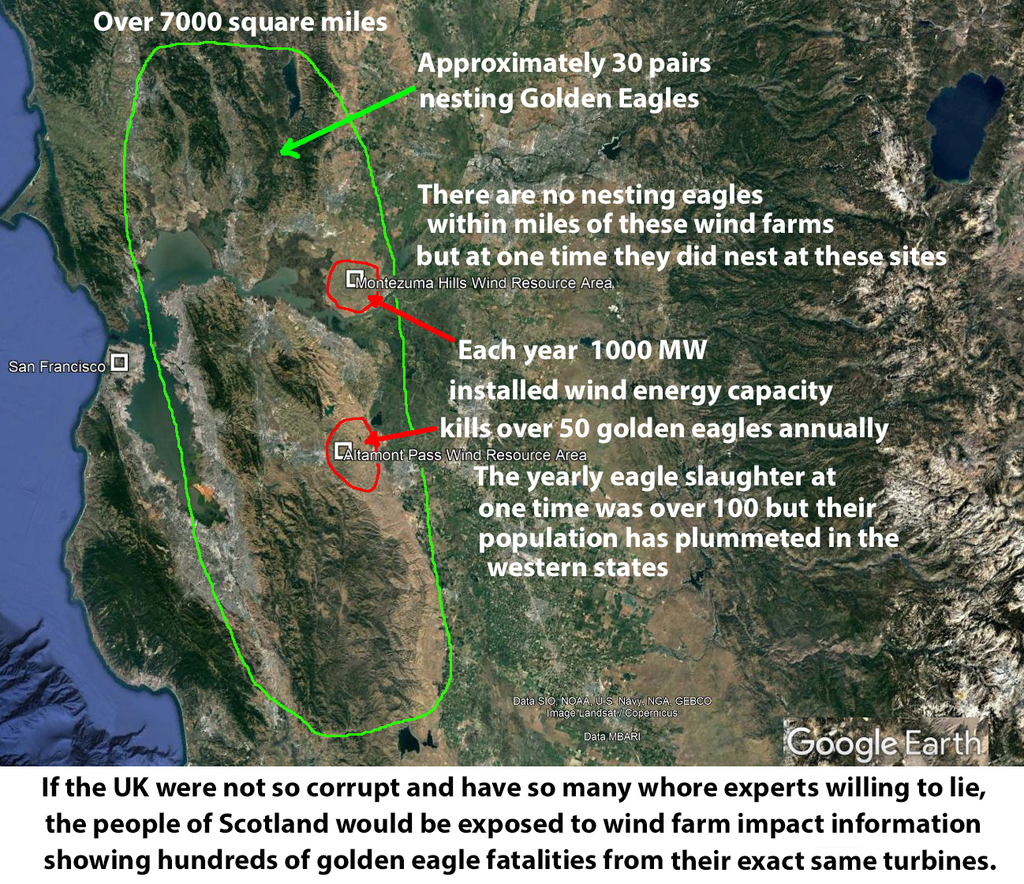 Over the years, these two wind energy locations with less turbine rotor sweep per square mile, have killed over 3000 golden eagles. This region just like many in Scotland, has such good eagle habitat, that there has been a steady supply of new eagles that have poured in after the resident eagles have been killed off. Over the years this cycle of death has had a huge impact on eagle numbers and their population has plummeted. In the US, this ugly truth has also is been kept from the public.

Making matters worse for all these eagles in this region, is that each year as a new crop of juvenile eagles disperse, they eventually find the abandoned territories and available food sources near these two wind energy locations. Most of this yearly crop are destined to be slaughtered by turbine blades. These juvenile eagles make up over 50% of these turbine fatalities and most occur in the first few months of dispersing. Make no mistake and most certainly do not be misled by lies, this same pattern of death is taking place in Scotland. 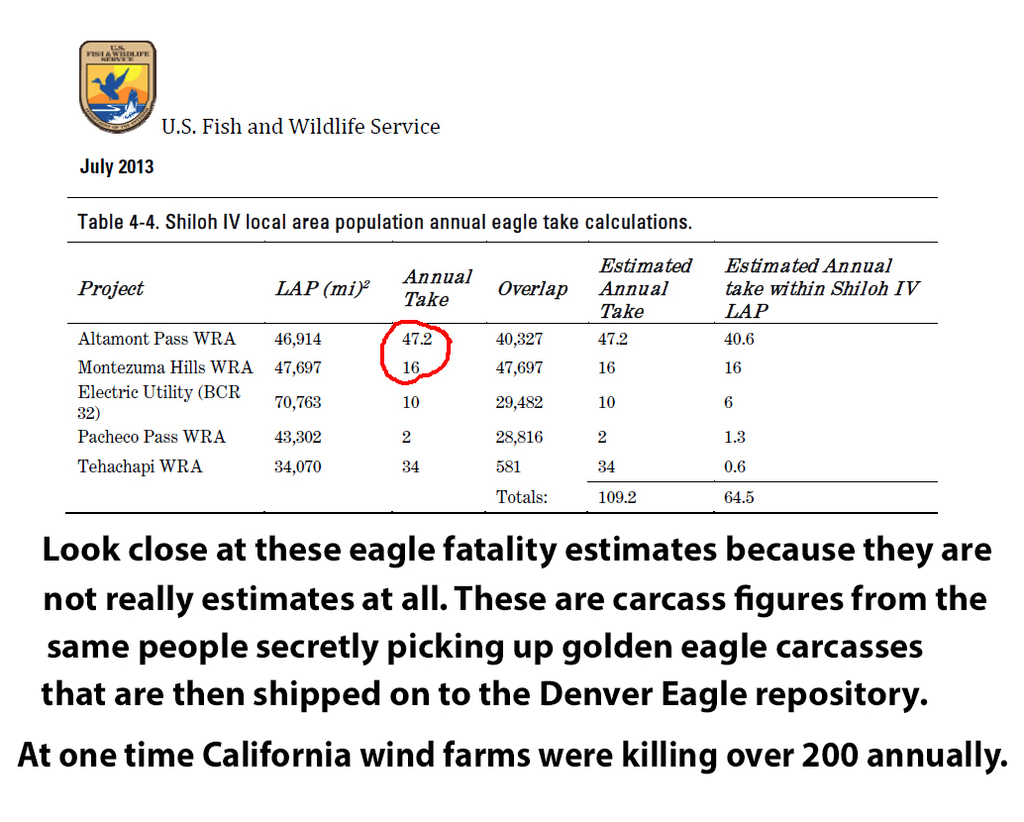 Here is statement made in the 282 page Scottish Natural Heritage Commissioned Report No. 982 and their feeble attempts to explain away Scotland's missing satellite tagged eagles ……………….

” The vast majority of tagged eagles in Scotland, and so reflecting the Cabinet Secretary’s concern over suspicious disappearances of tagged individuals, refer to these young birds, and this period in the biology of golden eagles. The database refers primarily to these young birds which were tagged as nestlings to study their subsequent movement behaviour and ecology after fledging (e.g. Weston 2014). The Cabinet Secretary’s concern and instruction relates to what happened to many of these birds after they were tagged as nestlings, when several apparently suddenly disappeared.” 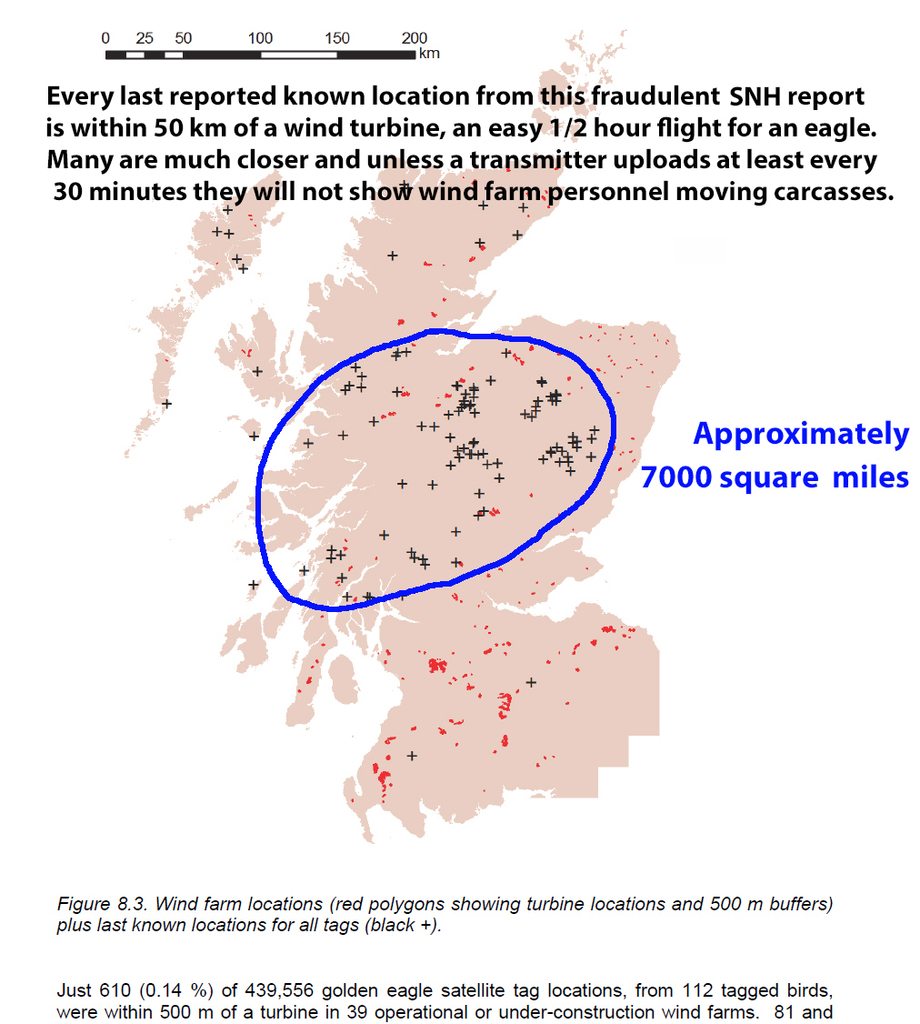 Here is my take on this same disgusting cover-up statement. There is nothing suspicious about the disappearances of many of these young golden eagles. They are being slaughtered by wind energy. To suggest otherwise is an inexcusable fraud being perpetrated on the people of Scotland. The major players in this massive  fraud are pretty much the same cast of dark characters we see here in the US.  The UK government, sellout groups (RSPB, Raptor prosecution, and SNH), international wind energy developers, and all the greedy estate owners with leases trying to maximize profits.

This final bit of information clearly illustrates the level of research fraud taking place in the UK. Pay close attention to these these two comparable tagged golden eagle statistics, with completely different explanations:

From the 2017 SNH report…………………”nearly a half of all the tags, which had an end fate and were not still tracking, suddenly stopped transmitting.” "(Birds carrying stopped no malfunction tags disappeared when relatively young.)"

Since the mid-1990's the golden eagle population in CA has declined over 80% and fewer than 100 pairs of golden eagles with active nest sites can be documented.