The Transportation Climate Initiative is Dead and Buried

The Transportation Climate Initiative is DEAD AND BURIED

The TCI was proposed about 2 years ago. The word “climate” was inserted for political correctness.

There is no way, any and all measures, by all of the US northeast, could ever affect the world climate, while China, India, and others, are allowed to continue burning at least 8 BILLION metric ton of coal each year, with NO time limit, as agreed to by Glasgow COP26

This article was written BY STEVE MACDONALD / 21 NOVEMBER 2021
https://granitegrok.com/blog/2021/11/the-transportation-climate-ini...

Yesterday, we reported on the death of the TCI, another taxation-without-representation scheme that would milk motorists to fund the ill-conceived Dem/Prog “climate-change-fighting” schemes, such as expensive electric buses and expensive, catching-fire EVs, electric trains and bicycles, ride-sharing, carpooling.

Charlie Baker, a huge supporter of TCI, backed out, leaving only Rhode Island, which had stepped away, but not formally retracted its interest in TCI. With Massachusetts out and Connecticut long gone, RI said it is done trying to make TCI work.

TCI has no takers and is dead and buried; but not the financing of the various, nefarious Dem/Prog shake-down schemes

Laundering money is still the goal, and transportation is still a target, but forcing gas taxes down people’s throats ("break their will") was not even a politically viable option, when gas was cheap.

Gas prices have increased 50 plus percent, in just a few months, thanks to idiotic energy policies of the extreme-leftist posses that are handling Biden
Massachusetts and Rhode Island are planning to “combat climate changes” using other financing means.

THEIR goal is to replace gas-powered vehicles with electric vehicles; a pipe dream of non-technical RE folks, that does not reduce CO2 anywhere near any claims by those RE folk, according to independent energy systems analysts.

That means, the taxpayer solution to the problem is to remove such RE folks from office in 2022, by turning out to vote in such large numbers, to more than offset any frauds by Election Officials and Dem/ Prog operatives.

Charlie Baker had been clinging to the TCI as a new revenue stream. It would add a Commission-imposed tax on all motor fuel. The tax would be passed down to drivers.

The money would be laundered through the Commission, and then, minus hefty fees, back to states, under the assumption they would use money to "save the planet".

Sure, if by “planet,” you mean the gaping holes in state budgets, due to decades of irresponsible/excessive spending habits of Dem/Prog-run states.

We have about 50 articles related to the infamous TCI scheme, including news and commentary about almost every state that considered, and then dropped, the idea of joining. I will not rehash that here, because that might look like gloating.

But, I am gloating.

So, what happened? How did this “we have to have this, or we’re all going to die” climate-cult-cash grab lose favor so quickly? It is very easy to explain.

The only climate politicians care about is the one that gets them re-elected again and again, due to a lack of term limits. Here is a double-speak, weasel-word obfuscation.

“The Baker Administration always maintained the Commonwealth would only move forward with the TCI, if multiple states committed, and, as that commitment does not exist, the TCI is no longer the best solution for the Commonwealth’s transportation and environmental needs,” said Terry MacCormack, the governor’s press secretary, in a statement.

Even before Biden-in-the-basement-inflation, the idea of saddling working-class voters with a massive gas tax was a tough sell. But, it was one Baker and his RE minions were prepared to embrace.

They would conjure up a, de facto, gas tax, that would start small, and then grow and grow, to generate $BILLIONS in revenue outside the election process.

That would be the Nirvana dream-come-true for big-spending Dem/Progs; they could not be accused of imposing any price increases!!

BTW, Vermont's GWSA is a similar avoiding-responsibility scheme to save the hides of non-technical RE Dem/Progs

The US economy has since gone into a slide. Black Friday was sort of a bust, and 2022 is looking like a steeper slide. Piling taxes, on top of existing gas taxes, is not what voters want.

A regional plan to reduce emissions, even just on paper, needed more than one interested party. Baker had no one else left to dance with, so he headed for the exit, and he is not coming back.
A non-possibility not all that long ago.

Katie Theoharides, the governor’s secretary of energy and environmental affairs, said in December 2020, when Massachusetts, Connecticut, Rhode Island, and the District of Columbia announced they were moving forward with TCI.

“Massachusetts needed the program, if it was going to have a chance of reaching its goal of net-zero emissions; we cannot get there without a program like this,” she said.

This is just another a statement by technically challenged ignoramus.

How do these people even get into these jobs?

They’ll have to find another way. A third way, perhaps?

Or did someone finally have to admit that zero-emissions are just another fairy tale cheaters tell to justify shaking down voters for cash?

Even if every state signed on, it would have always been about redistributing money from people who could least afford it, to pay for the “climate-change-fighting” priorities of a well-to-do spectrum of RE folks who could.

India: India declared it would not sign the statement of COP26 goals regarding coal burning. Instead of reading “close down coal by 2030”, India insisted on “phase down unabated coal”. Unabated refers to the common practice of Indian households, etc., cooking over open fires with coal, a major source of local air pollution. It would be phased down (no time limit was stated).

All this means, the burning of coal in power plants, with air pollution abatement systems, would be unaffected (no time limit was stated). The major coal burning countries, such as China, India, Australia, Brazil, the US, etc., would continue to burn coal in power plants.

India declared it would not sign the statement of COP26 goals regarding coal burning. Instead of reading “close down coal by 2030”, India insisted on “phase down unabated coal”. Unabated refers to the common practice of Indian households, etc., cooking over open fires with coal, a major source of local air pollution. It would be phased down (no time limit was stated).

1) The burning of coal in power plants, with air pollution abatement systems, would be unaffected (no time limit was stated).

2) The major coal burning countries, such as China, India, Australia, Brazil, the US, etc., would continue to burn coal in power plants.

The Global Warming Role of CO2

Many articles have been published by independent academic researchers that show CO2 does not have nearly as much global warming influence, as claimed by the "consensus of 97% of establishment scientists”

Among these scientists are those who concoct about 102 squiggly lines, based on mostly guesswork, estimates, and interpolations.

Then the IPCC takes an average of all those lines (the red line) to anoint the "official establishment global warming trend", a procedure no real scientific laboratory could ever apply to laboratory data.

On purpose, not a single squiggly line is left out, so all those pseudo-scientists at universities, think tanks, etc., will stay united, and will continue to receive abundant funds to “do research” for many decades. See image.

These articles show the research of independent scientists. 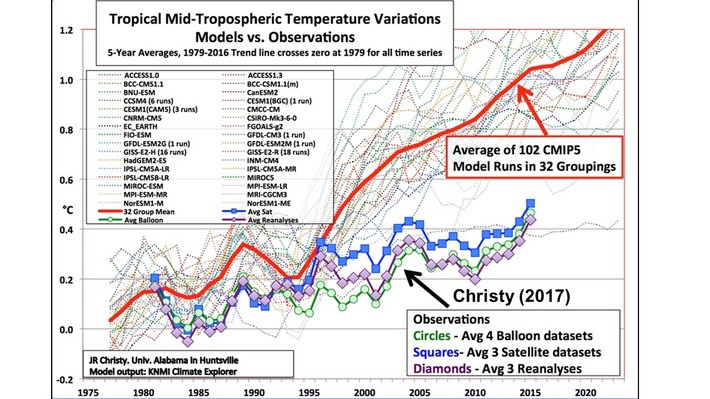 We hardly ever have a repair bill

Liability insurance (GEICO) for both cars is about $1,200 per year

WELL thanks for the analysis. A lot more info than I can decipher. You might want to avoid acronyms and abbreviations. ALL I want to know is how much am I going to get paid per month per solar panel I install?

And what's the average value of parking my car for a year. Better yet, how much would I save if I never owned or leased another car/truck. I have read that all tolled, a car costs on average $10,000 per year to own. I'll have to scope out the bus for 2022.