The main reason is that stakeholders and insiders have been making up rules with loopholes.

Then besides the unverifiable energy production being reported by wind projects, there are system losses created by the constant load fluctuations associated the intermittent production from wind projects.  Additional losses also occur when this energy must travel hundreds of miles through transmission lines, power stations and transformers. These losses are also not calculated and all together these losses are substantial.

Yet with wind energy, this industry pretends that every possible kwh of wind energy is usable and no energy is lost on the way to end use consumers. On paper this convenient loophole makes these projects appear more productive to the public. This fantasy is much like a farmer thinking every head of lettuce laying in his field will end up purchased in a consumer’s refrigerator with no outgoing costs for the labor or fuel involved in the production.

For that lucky lettuce farmer, it is like getting paid two or three times for every head of his “special green” lettuce, even though totals his are not verifiable and many will never reach the consumer.  This is why companies like Google, Amazon are piling on to the wind energy bandwagon. Selling this energy fantasy to America has been highly profitable.

But getting the real energy production numbers for wind turbines and getting the truth from energy providers will not happen. Getting these numbers, will be even harder to get than the total numbers of eagle carcasses being shipped to the Denver repository from America’s wind farms each year. This is because these numbers are protected by Washington, thanks to Bill Clinton’s amending this country’s Freedom of Information Act in 1997.

The reported energy amounts from these projects are like gold because of the production tax credits and carbon credits being given to this fraudulent industry.  These contrived green energy production numbers are being used to soak taxpayers. To me the obvious conclusion from all this is that this greed driven industry, silently slaughtering off our eagles, can’t help themselves and all credits must end.

These turbines have been installed in CA for decades. In Southern CA the historical mountainous range of the Condor was destroyed by this industry and now this endangered species is captive to a small region with permanent feeding stations away from turbines. The golden eagle population has been decimated, but rigged USGS 2015 research is hiding this fact and exaggerating their populations by more than ten times.

Huge sprawling areas of CA have been blighted or devoured by this industry and across this country millions of protected birds, with lives dependent on these open spaces are getting slaughtered annually.  So, what has been the net benefit from all this destruction?  Probably none except financially for a limited few.

After years of turbine construction on California’s remote ridge lines, wind turbines began producing a bit of wind energy for the grid in 1983.  That year CA produced about 53 Gigawatt Watt hours of wind energy. Over the years this production has grown to about 12,000 GWh in 2015. This is an annual production increase of around 11,950 GWH after a span of 33 years.

If you happen to be a wind industry supporter, a turbine peddler, the California Energy commission, the AWEA or even one of the industry’s many fake wildlife biologists, you would be boasting that wind energy is the fastest growing source of energy in the US, having increased by an amazing 240 times.  While a tiny bit of this information is true it is also one of the biggest lies being fed to the public by all these entities.

Now, 33 years later, the fantasy of wind energy fulfilling California’s electricity needs, has become even more impossible because this wind turbine gap (energy production vs. total consumption) has grown from 199,609 GWh to over 288,000 GWh per year.   Adding the electricity load losses and transmission losses, this state is now using well over 300,000 GWh of electricity per year.  For wind energy to have just kept pace with this state’s growing grid demands, since 1983, CA would have had to install more than 8 times (49,200 MW) more wind energy blight across their open spaces.  But this installment figure is likely worse because one would have to accept this industry’s reported wind energy production figures. 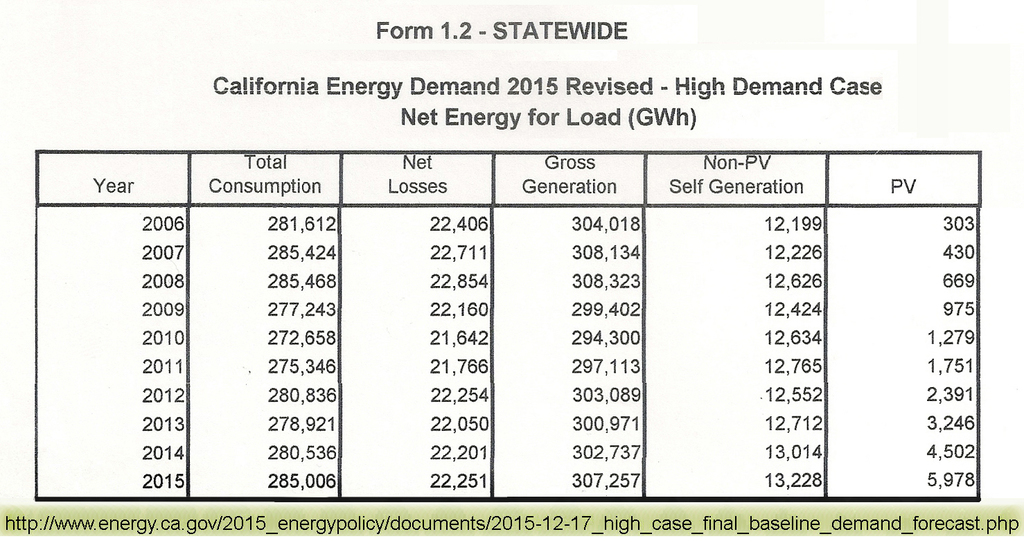 In other words, California’s energy imported figures are not accurate and the consumption of energy and transmission losses are most likely much higher.  How much energy is purchased by consumers is far different than the amount of electrical energy needed to keep all the transmission lines charged.  California is now importing more than 35% of their energy consumption and most this energy produced from gas, coal and nuclear electricity, is coming from 7 other states.

There should be no question in anyone’s mind that electrical consumption in CA is much higher than the Statewide figures given above. This is because there is also no accounting in the CEC energy figures for another very substantial energy consumption sector in CA,  the energy used by the Defense Department and these numbers within CA are substantial.

As for the wind energy being produced in Oregon and Washington, their wind energy production isn’t even being produced for their Renewable Portfolio Standards.  The reason is because these two states have been supplying over 60% of their electricity consumption with renewable hydroelectric power sources for decades.  Sadly in these two states, all the wind turbine blight, the slaughter of species and ecosystem destruction taking place to their open spaces, is for California’s Renewable Portfolio Standards, so it can be put on their books.

I will point out that making power agreements with these two states does have other benefits, it helps to satisfy a fake demand and a false need for these non-producing turbines.

A lie told to Congress in 1998………. “We can open up the wind resource in this country with the advanced wind turbines we're developing and basically supply all the electricity in the United States, if you tapped all the potential that was there".

Wake up folks, the only way this could ever be possible is if America’s population were reduced by more than 90% and with no future growth.

After 4 decades, spending 100’s of billions on wind energy development and destroying the Golden State environment, Californian’s have very little positive to show for this failed green energy source.  In the next 2 decades, a new generation of electric cars, electrical gadgets and an electrified rail system, will add substantially to this state’s electrical load requirements.  Soon the total electricity needed to satisfy CA’s growing consumption will exceed 400,000 GWH. 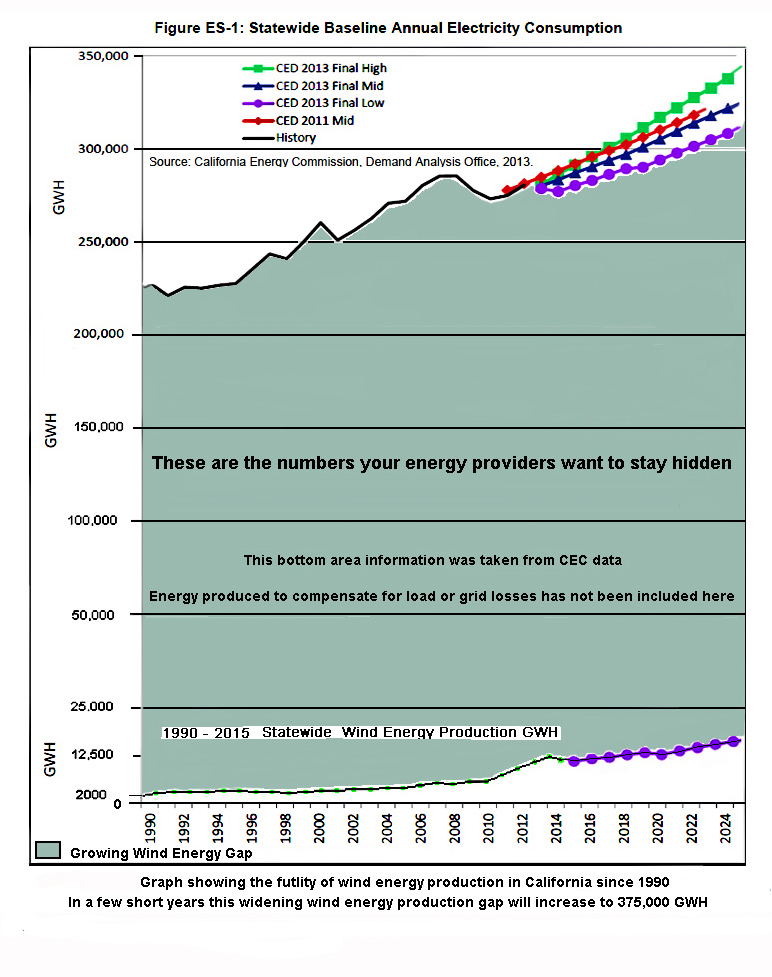 Audubon, Sierra Club and every other sellout conservation group taking corrupt wind energy money, should have explain all this on their websites or at a congressional hearing.  These groups should also have to explain to their ignorant well-meaning members, exactly how supporting wind energy’s putrid numbers with their impossible climate fixing dream, are a good tradeoff for a growing slaughter to thousands of eagles and millions of birds annually.

In Part 3 the numbers get even worse.

I've lost the source, but I read that in Oregon, when the wind energy produced overtaxes the transmission lines due to plenty of energy being produced by the hydropower generators, the wind turbines are made to shut down but that the owners are paid for the electricity that would have been generated if allowed to keep producing. Doesn't anything about this strike anyone in decision-making positions as crazy? So electric bills are sync'ed, not with efficient, economical and clean hydropower, but with inefficient, uneconomical and environmentally destructive wind power. And yes I'm aware of the fish and the rivers affected by hydro dams. But hadn't we worked out how to mediate that damage better than how to deal with turbine costs and damages?

Part 3 will be posted tomorrow.