I also could not help but notice that the UMaine used Web camera surveillance of the turbine. If the industry had done this with their post operational mortality studies, the public would know that over 20 million birds each year are being killed by wind energy.   But this web cam stunt is also not what it seems because recording images every 15-30 seconds leaves gaps and golden opportunities to filter the truth from the data. All web recording should have been continuous

In this US Department of Energy Office report ………”SUPPLEMENT ANALYSIS 2 FOR THE SUPPLEMENTAL ENVIRONMENTAL ASSESSMENT/FINDING OF NO SIGNIFICANT IMPACT FOR THE UNIVERSITY OF MAINE’S DEEPWATER OFFSHORE FLOATING WIND TURBINE TESTING AND DEMONSTRATION PROJECT” this  statement was made:

“4.0 Conclusions and Determination…………..These findings are not true and for the reasons stated above, new credible research is needed

This is a false statement and my comments prove that there are very significant new circumstances or information relevant to environmental concerns.  NEW research around Monhegan Island absolutely needs to be conducted by credible experts.

(a) DOE shall prepare a supplemental EIS if there are substantial changes to the proposal or significant new circumstances or information relevant to environmental concerns, as discussed in 40 CFR 1502.9(c)(1).

I also noticed this important information given below from the SUPPLEMENT ANALYSIS 2. I found it to be very disturbing, substandard and completely unreliable.   It should not be accepted as being credible.   In the table shown there are an incredible number of unidentified species listed as being potentially threatened, endangered or of special concern. Accepting this uncertainty would be a disgrace. 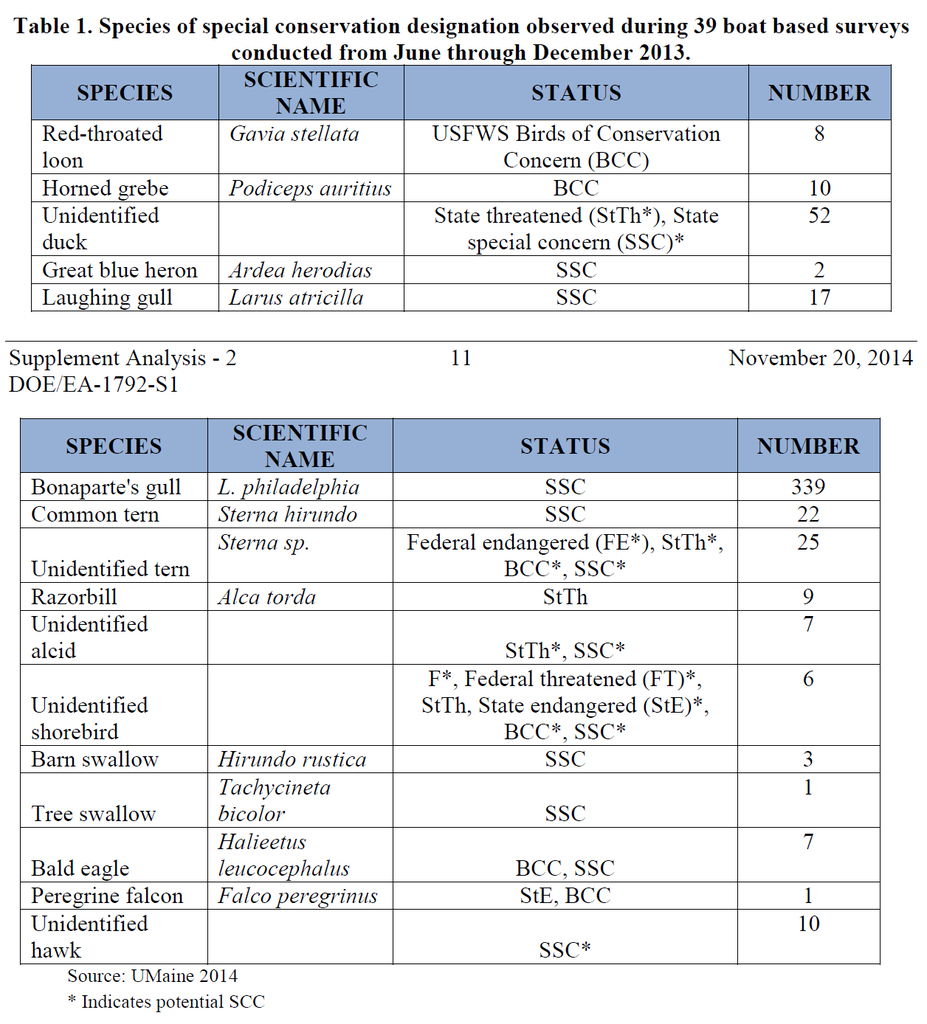 These boat surveys need to be dismissed because of the uncertainty given by the observers. New surveys desperately need to be conducted by real experts familiar with these species. I can’t imagine seeing 10 hawks in the field and not knowing the species.

As I have shown in these comments,  the avian and bat studies conducted for the Aqua Ventus wind project are misleading, inaccurate and most of all, they do not comply with scientific standards. They are therefore not in compliance with NEPA (42 U.S. Code 4321, et seq.) and DOE’s NEPA regulations (10 CFR 1021.330) and procedures, the purpose of this SA is to examine the potential environmental impacts.

Here is a little more insight into the stupid little 20 kW test turbine and a comparison to the huge 6MW turbine planned the Aqua Ventus wind project. While the huge turbine may have 1150 times the cubic rotor sweep, the amount of killing rotor sweep is far greater.    The huge 6 MW turbine with the slower RPMs has a muchlarger killing areabecause birds can see past and through the spinning blades.  With the small turbine birds will be clipped primarily on the outer edges of the blades. Birds will avoid most of center regions of te tiny turbine's rotor sweep because spinning at 100 RPMs,  the sight plane is obstructed by the blur of the spinning blades. With the big turbines traveling at great speed but only rotating at about 12-18 RPMs over 50% of the blade length contributes to deadly sweep because birds are fooled and will try to fly through the rotation gaps.  The industry has known all this for over 20 years but has covered it up because in their minds they need to sell their bigger turbines to America.   So in reality when talking about deadly bird killing rotor sweep , the huge 6MW turbine planned for Monhegan Island, easily has several thousand times more deadly sweep than the stupid little UMaine 20 kW test turbine.

Sounds like "better to beg forgiveness than ask for permission" and "possession is 90% of the law". It's high time some of these shysters start going to jail.

A word to the wise. In most of the Massachusetts wind turbine studies done to install wind turbines you have to look for what they do not put in the reports -not actually what is in them.

An example is 100 homes may be affected by noise - In Massachusetts this was what was in the Falmouth wind turbine study. The study before the Falmouth study they warned of two distinct types of noise "measured in decibels" and "human annoyance."  They were not successful with warning about two distinct types of noise so they just changed it to how many houses will be affected by noise.