As I have discovered over the years, wind industry research is not really research, it is a performance designed to fool the ignorant.  I have not read a single wind industry related study or survey conducted after 1985 that I consider credible. The studies conducted for this wind project fall into this same pattern.   The results derived from the research conducted for the Aqua Ventus wind project, by New Jersey Audubon, Stantec Consulting Services and the University of Maine,  Castine 1/8 Scale Test Turbine study should never be accepted as complete, conclusive or scientific.  I will first point out a few problems with the New Jersey Audubon Radar Study.

Monhegan Island, located about10 mi offshore along mid-coast Maine, is widely recognized as a world-class birding hotspot and bird stopover site. This island is one of many in the region that dozens of bird species use during their island-hopping movements. The fact that Audubon failed to mention the importance of this region to so many species in their radar study is telling.

Yet on their website, Audubon is quick to point how important this Island is when selling their $1795 birding tours:

From “RADAR MONITORING OF BIRD AND BAT MOVEMENT PATTERNS ON MONHEGAN ISLAND, MAINE AND ITS COASTAL WATERS”, here are a few telltale quotes:

…… “The average height and size of wind turbines have also increased over time (Wiser and Bolinger 2008). These developments have led to concern about potential negative impacts of wind power development on wildlife and their habitats, particularly migratory birds and bats, and have prompted calls for the development of standard guidelines for identifying, assessing, and monitoring those potential impacts (USFWS 2012)”.

This statement above is very misleading and biased. Not only because their work was derived from inaccurate keyhole methodologies that avoided true field conditions, nothing about this study/report is conclusive. New Jersery Audubon even admits to research flaws over and over again.  Some of these flaws are more obvious than others.

…………..“Our radars were configured to sample relatively small volumes of space compared to the extent migration and other types of bird and bat movement (e.g., post-breeding dispersal, post-fledging dispersal) that likely occurs in Gulf of Maine, and more specifically, the offshore waters in the vicinity of Monhegan Island.”

…………“Additionally, we use the term "target" rather than "individual" or "flock" because the number of birds or bats represented as single entities by the radar was unknown.

……………..“Our inability to distinguish between birds and bats during radar monitoring, or distinguish among species in each of these taxa, also is important to note. Flight behavior (e.g., migration phenology, altitude) of several avian taxa (e.g., passerines) overlap with those reported for bats (Larkin 1991, Bruderer and Boldt 2001, Kunz and Fenton 2003). Consequently, we could not determine the relative contribution of birds or bats in spatial or temporal patterns we observed.”

…………..“ Data images with precipitation, insect contamination or any other unwanted propagation were removed from subsequent data analyses either using data processing software developed by NJAS or by manually removing images from data sets before analyses. In extreme cases (e.g., continuous rain), we removed entire days or nights of data from analysis when the number of images with contamination was > 50% of the total images collected.”

From what I have seen with wind industry research, these were likely, very important bird migration days that were conveniently dismissed. Sort of like having the tiny 50 meter mortality search areas around the huge Wolfe Island turbines so most carcasses could be overlooked.

Only 50 meters in height?  Wake up folks.  All radar the data should reconfigured for a full scale 600 ft turbine, like the 6 mw turbines planned for this site.

None of this poor research conducted by Audubon is surprising because Audubon has a history of wind energy bias, bungling, coverup, and research incompetence going back to Altamont and their settlement with Enron.  I will give just a clear example of all this from their involvement at Altamont Pass. 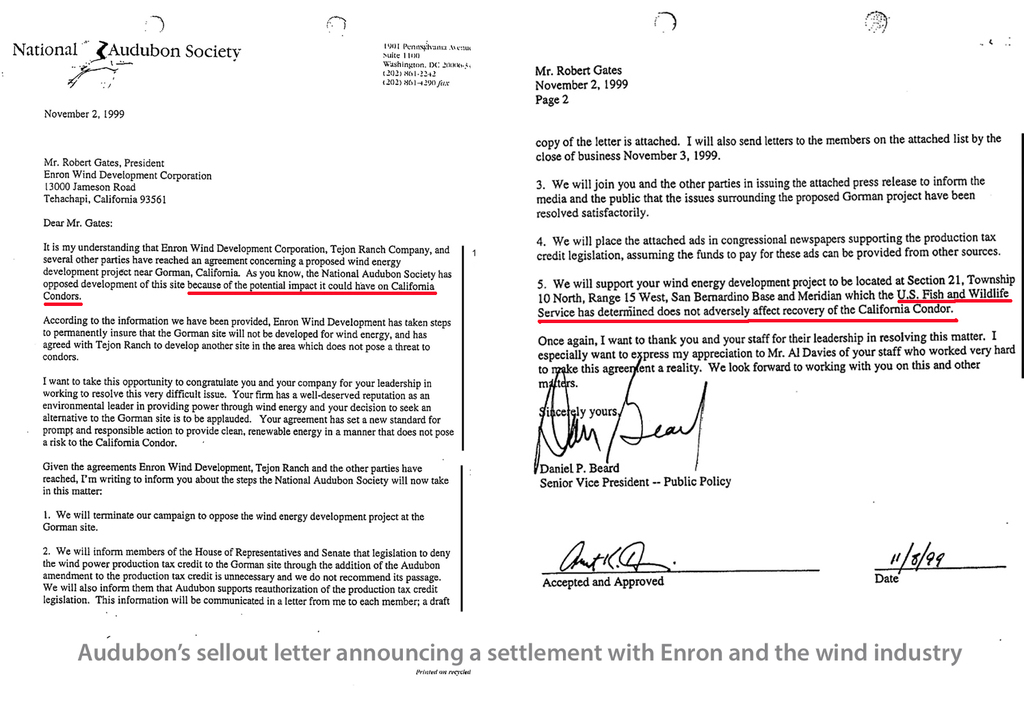 Now read the truth all these people did not tell the public.

The majority of eagles killed at Altamont are killed during the months of May-Sept. These are primarily local and regional eagle offspring dispersing from their nests. This pattern of slaughter has occurred for decades. The public would know all this if developers and the USFWS were not in collusion hiding turbine impacts and if Audubon knew what real research really is.

In the settlement with Alameda County, Audubon and developers there was an agreement to shut off the turbines during key eagle migration periods. This shut down period that garnered loads of publicity in the media was conducted in the winter but did very little for these eagles.

From May to September this wind resource area, not only kills the most eagles, it also generates the most electricity April-Sept) and with it the most money.

Here is the reported Altamont EAGLE CARCASS COUNT given to me from the USFWS. ………….”Jim, below is a monthly break-down for Altamont dating back to 2013 regarding eagle fatalities. I can not guarantee these numbers are exact, but I am confident that they are certainly close.”

More reasons dismiss all wind energy opinions given by Audubon

At Altamont the 2005-2010 mortality study used by Audubon to assess the required reductions in raptor mortality for the Audubon settlement. Yet, in this study 6,133 carcasses were found (over 5 times more) than the previous 1998-2003 study. In this study only 56 eagle carcasses were collected over a five-year period.

In the 2005-2010 mortality study similar searches with 30 day intervals were uses and more than 1,500 (over 10 times more) carcasses were dismissed from the data and called incidental (see table 2-2).  This total also includes 21 additional eagle carcasses that were picked up the WRRS and dismissed from calculations.  These studies reported a total of 126 golden eagle carcasses or about 21 per year.

With this increased carcass, the Audubon Society fraudulently reported a substantial decline in eagle mortality.  As I stated earlier wind industry research is not really research, it is a performance designed to fool the ignorant. Audubon was in on this performance and since their Condor settlement with the industry, Audubon has received substantial funding from their association with wind energy.

Awesome...send as an attachment you can use more words...and thanks so much!!