If You Don't Know Moosehead---View This Video. Save Moosehead from the Wind Power Scourge!

Moosehead Lake is simply astounding, truly a natural treasure. The iconic Mt. Kineo rises dramatically from the vast lake. The view from the top encompasses the blue water surrounded by verdant forest and the ancient Appalachian Mountains. Enjoy the vistas in this video, then envision the lake encircled with 50 story wind turbines on every available ridge. Please speak out against the destruction of this unique region that deserves national park status, not industrial wasteland…

This recent photo of the wind turbines on Lowell Mountain in northern Vermont in a lightning storm provokes the thoughts of the dangers of forest fires as these machines are erected throughout heavily forested areas in northern New England.  We know the turbines have lightning rods, but so have the thousands of barns that have burned down after lightning struck their rods.  If not properly maintained, lightning rods are simply ornaments, not protection.  A lightning strike on a turbine not…

An erstwhile wind warrior grabbed his camera this week and sent in these sad photos of the Oakfield Wind project, still under construction, but with enough turbines up so the impact is clear.  First Wind bamboozled the Town of Oakfield with a so-called collaboration with a poor town that was eager for tax revenues and landowners eager to get leasing income.  Again, First Wind laughs all the way to the bank, having taken over the town at a cheap, rock-bottom price.  Then DEP Commissioner Aho…

Wind power critic and author Mike Bond, a Maine native, will be discussing his book "Killing Maine" on Friday, August 8 at Sherman's Books at 49 Exchange St in Portland, ME.   The event starts at 7 PM.  Please come if you can to support Mike and to speak to the others about the scourge of industrial wind power.… 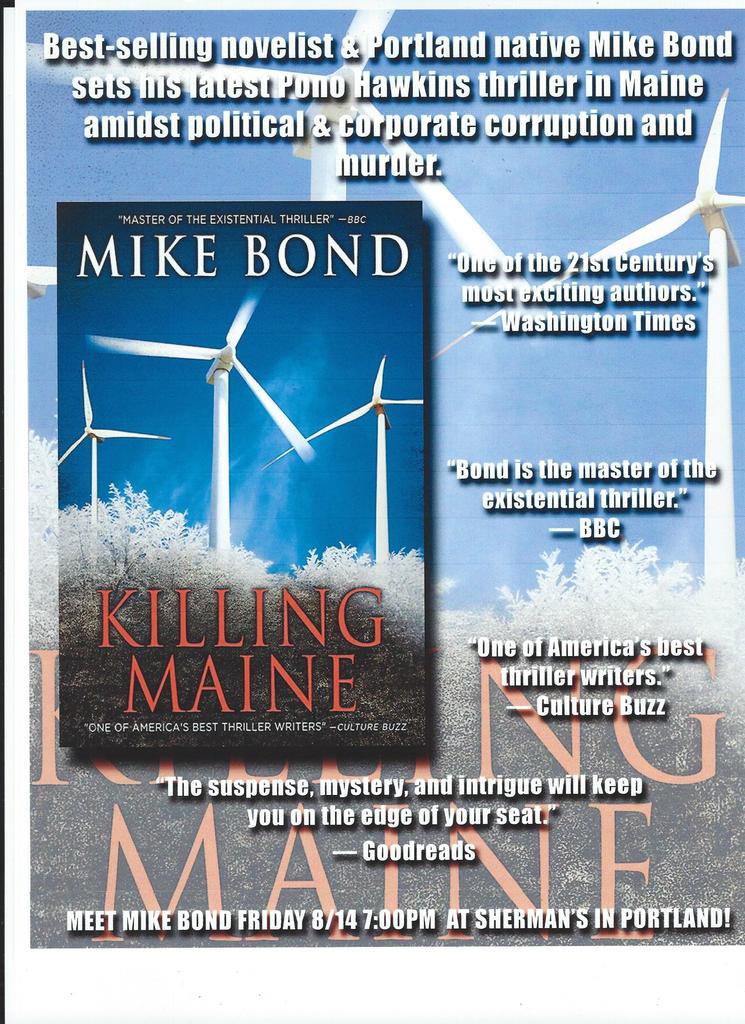 Must Read Article About Wind Power Devastation of Rural America

One of the foremost wind power activists in the Northeast is Mary Kay Barton of upstate New York, the only area in the eastern USA with more industrial wind turbines than Maine.  She has published a scathing analysis of wind power in Master Resource. …

Our local Oakfield Wind opponent has supplied more photos of the all too common views of a wind power site being erected. Turbine N12 going up.  At 489 ft from base to apex of blade, it towers above the surrounding forest and is less than a mile from homes, where residents will surely be affected by turbine audible noise and infrasound…

We are constantly criticizing the high cost per Megawatt Hour of intermittent wind power.  While people can shop around for a better deal than the default "Standard Offer" approved by Maine's PUC, seldom do people make a conscious choice to spend more on wind power supplied…

Spanish based Iberdrola, the parent company of Central Maine Power Co. is also, through Iberdrola Renewables, developing wind power sites.  It wants to destroy Fletcher Mt. in the mountains around Lexington, Concord and Pleasant Ridge Plantations with a project to be known as West Range Wind.

With apologies to CTFWP members who are Sierra Club supporters based on the GOOD things the organization has done in protecting the environment, here comes the proof that Sierra Club was bought off by special interests to promote wind and solar development.  The folks who stand to make a lot of money off this scam have poured their money & influence into Sierra Club, as documented in "Big Donors . . . Big Conflicts".  That has to filter down to Maine, as Sierra Club…

One of the most contentious wind power projects has started construction, completely unreported by the Maine media.  The Passadumkeag "Wind Park" will desecrate the highest point of land between Cadillac Mt. and Mt Katahdin.  Initial public reaction reduced the original proposal from 27 turbines sprawled across the 5 mile long monadnock ridge to 14.  The application was filed on February 2, 2012 and the expedited wind…

We have been given permission to publish these copyrighted photos of the Oakfield Wind project.   Nothing to add.  The photos sadly tell the story.… 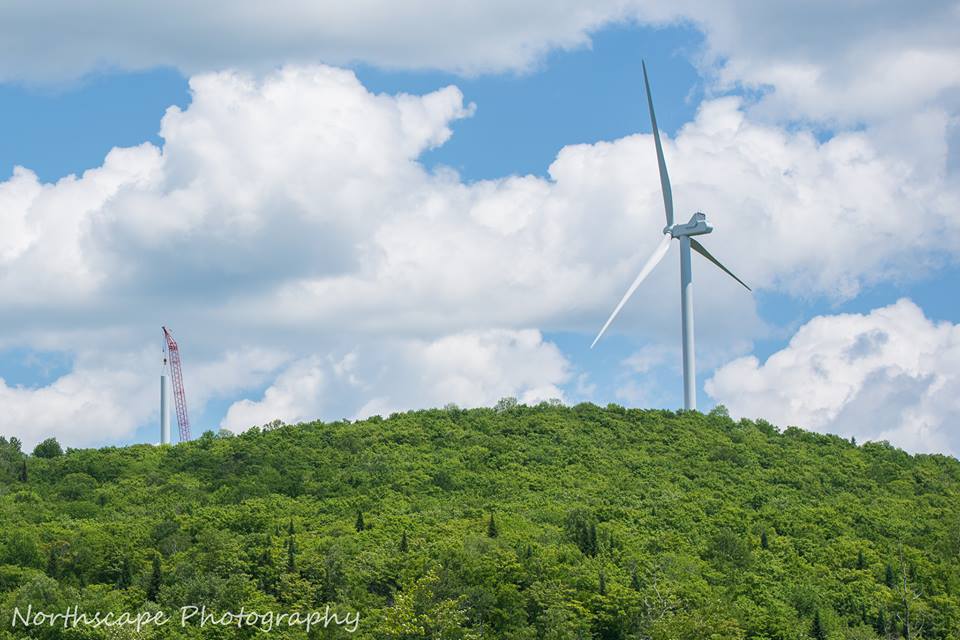 With the conventional generators providing the New England grid with wholesale prices around 5-6 cents per kwh, it is absurd that Deepwater Wind in the shallow waters between Block Island and mainland Rhode Island will come on line starting at 24 cents per kwh. …

The Ellsworth American Newspaper clearly understands the issues regarding the proliferating wind scourge in Maine.  Its good they do, as the stretch of small mountains and ridges along Maine's remote Downeast Coastal region are targeted for heavy wind power development following theBull Hill project.  The problem is all this region consists of Unorganized Territories and tiny towns and plantations all enveloped by the heinous Expedited Wind Permitting Zone.

Here is an excellent quote…

In a seesion of the legislature where the Governor has been vetoing legislation , Governor LePage stood up for the rights of the citizens in the state's Unorganized Territories and SIGNED LD 828 into law.  What a long and skillfully fought victory!  The following is the message from UT Citizens for Fair Policy.…

It is interesting that there is no US media coverage of this perspective from Bill Gates.  This article comes from the UK.  The UK doesn't utilize direct taxpayer subsidies like the USA, but instead has forced a "Feed-in Tariff" on the grid, forcing electricity costs to skyrocket.  This, in turn, has led to poor and working class people to endure what has been termed "energy poverty" such that they must sacrifice heavily on other things to try to keep the lights on.…

One of the problems we have continually struggled with is the bias of the Maine media in their complicity with the wind industry in promoting this scourge in Maine.  When I saw this completely biased article in the Lewiston Sun Journal, from a reporter who I know must have my phone number and email from previous interactions (as well as contacts for other wind power critics), I got angry and fired off this email:

"Mr. Karkos, I have to strenuously object to the article…

The massive Oakfield Wind project has towers being erected at a steady pace.  There will be 50 Vestas V112 turbines when complete, each standing 492 ft tall from base to apex of the blade.  This project represents one of the worst travesties in our sordid history of wind power projects in Maine, as DEP Commissioner Aho allowed First Wind (now SunEdison) to amend an existing license for 35 1.5 MW GE turbines, each at 389 ft tall, and expand it to this completely different project, impacting a…

Victory for Citizens' Rights in the Unorganized Territories of Maine as LD 828 Passes!

We have gotten few victories from the State Legislature, but the dogged determination of the Maine Citizens of the state's Unorganized Territories now have won a process to have a say about whether or not to be in the Wind Energy's Law's arbitrary "Expedited Permitting Zone".  Great job to the group "UT Citizens for Fair Policy".  Here is their press release:…

The Portland Phoenix  weekly edition has just been posted on-line.  There are several articles relating to wind power and other issues that relate to wind power.  Chris O'Neil of Friends of Maine's Mountains and Brad Blake of Citizens' Task Force on Wind Power were both contributors, but this is a great opportunity for us to bring our case to readers of the Phoenix.

The Phoenix is one of the most prominent "freebee" news tabloids that are distributed everywhere, plus it is on-line. …

The Forest Ecology Network (FEN) has been fighting the scourge of industrial wind power development since the first wind projects started.  FEN is a stalwart ally in our fight against wind power in addition to their focus on other threats to Maine's vast woodlands.

The Spring 2015 edition of their periodic publication "The Maine Woods" has just been published on-line.  It includes a major critique of Maine's wind law by activists Don & Paula "Maine's Contentious Wind Energy Act". …