One of the most contentious wind power projects has started construction, completely unreported by the Maine media.  The Passadumkeag "Wind Park" will desecrate the highest point of land between Cadillac Mt. and Mt Katahdin.  Initial public reaction reduced the original proposal from 27 turbines sprawled across the 5 mile long monadnock ridge to 14.  The application was filed on February 2, 2012 and the expedited wind permitting process started its rapid countdown.

A poorly advertised public meeting was held on April 25, 2012 followed by a draft DEP staff recommendation for approval on July 5.  However, this set off a firestorm of opposition, culminating in a lengthy July 12, 2012 public meeting attended by more than 300 opponents of the project.  DEP Commissioner Patricia Aho not only chaired the meeting, she and key DEP staff toured the region.  The result was a DENIAL of the application issued on November 8, 2012.  The denial was based on the adverse scenic impact on a Scenic Resource of State or National Significance, Saponic Pond, located to the north of Passadumkeag Mt.

On August 20, 2013, the Board of Environmental Protection--not a single member of whom had been to Saponic Pond, Passadumkeag Mt. or the surrounding region--voted to uphold the wind developer's appeal and directed the DEP to issue a license.  The decision was based on a narrow interpretation of the Wind Energy Law and the acceptance by the BEP of characterization that "moderate" adverse scenic impact was not enough for the DEP staff to make a decision to deny.  The BEP decision was subsequently appealed to the Maine Supreme Judicial Court, which upheld the right of the BEP to make the determination to reverse the DEP decision on October 22, 2014.

As long as loose, subjective characterizations by the so-called "scenic experts', whether hired by DEP or on the payroll of the wind developer, that the adverse scenic impact on SRSNS are "moderate", "medium", or whatever, there will be no stopping the proliferation of the sprawling, destructive industrial wind sites.  The scenic and natural resources of the state will be destroyed akin to a death by a thousand cuts as ridge after ridge is scalped, blasted, cut & filled, poured with thousands of tons of concrete and hideous wind machines now proposed to be as tall at 570 ft erected on them.  Will we lose 350 miles of scenic uplands before we say "Enough is Enough"?  Will we destroy Maine's vaunted "Quality of Place" for such a farce?

Below is a photo posted by the lead destruction company for Quantum Utility Generation of Houston on their website touting their work begun at Passadumkeag Mt.  This environmental destruction is what people who superficially support wind power because they have succumbed to the two decades of wind power propaganda never see.  Save this image.  Next time someone says how great wind power is for Maine, send them this photo and ask "Is this protecting Maine's environment?" 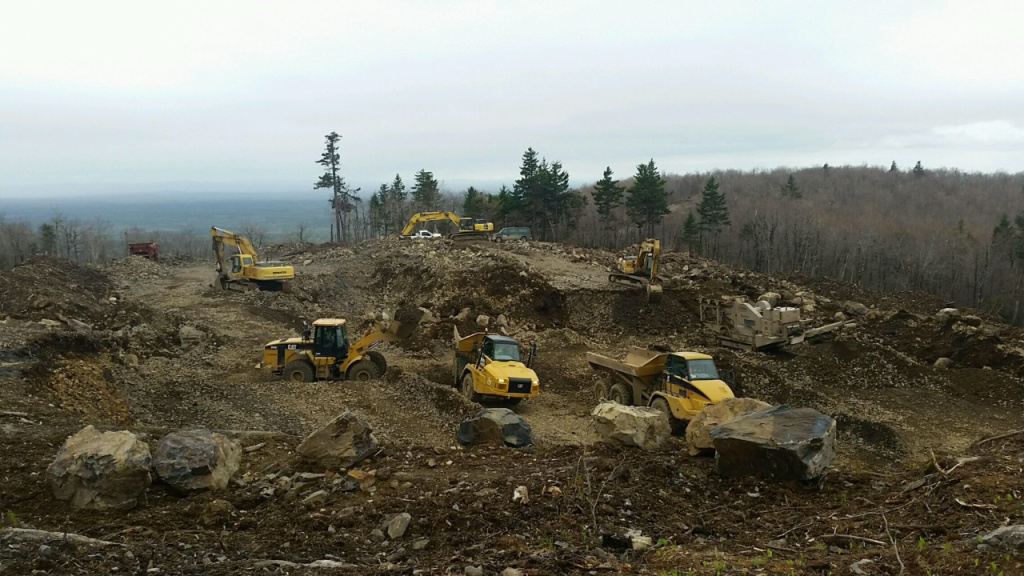 The link for the page of AJ Coleman, the destruction company from out of state, is here: http://ajcoleman.com/current-projects/passadumkeag-wind-project/

Notice I said "out of state"?  The contract for site clearance didn't even go to a Maine company, contrary to the constant false statements by Maine Renewable Energy Association touting all those Investment dollars wind power brings to Maine.

Comment by Kathy Sherman on July 9, 2015 at 7:23pm
Eric/Brad,
Would you do the same for Brad's Oakfield pictures Sunday, please? It is so much easier to distribute and I think Oakfield and Bingham need to get into the Massachusetts press, now that it is happening - real time.

Thanks Brad, but I would rather not assume. BTW I sent to all Newspaper Media of Maine today, without any rejections thus far.

Eric, I like what you did and distribute it widely!  Anyone else can do so as well.  For 6 years, I have made all f my writing and my photos available in the public domain.

Web Page view of Brad's Posting for distribution. (with permission)

All of Maine's Newsprint Media should be displaying this along with Brad's writeup. They were recently praised (one person's opinion) for doing such a good job of reporting at the recent "A Declaration of Conscience" rally in Augusta, now it is time for some of them to live up to that praise. Personally I hold a different view about Maine's Media in all forums. Overall they are not investigative in what they report and only cover the surface of any story or issue. They do not follow, and dig into it for provable facts. If they had been doing their jobs properly, their reporting would have provided sufficient information to the public to instigate a multitude of open public debates, opening the doors for more Public Voting on many issues. Instead we get a bill making it more difficult to implement citizens Initiatives.  Maine Media Spreadsheet https://docs.google.com/spreadsheets/d/1sXOdSOu_9RKPPc9Y-sMaRPI1ixi... Brad's Beginning of this post https://docs.google.com/document/d/1SXlN8NxMygSXCnnekwLLbaCH8MYW69O... (Download as PDF and send as attached file to Media) I am not sure if a small Newspaper as the Piscataquis Observer would print this, but it will be sent to one reporter who may.

Wind-holes are wrecking our state with impunity. The BDN should have this site clearing pic on the front page so the readers could see what the "green" fraud really looks like.

Comment by Kathy Sherman on July 7, 2015 at 10:03pm
steve, it will affect climate by taking away buffer, taking away C02 sucking forest, and destroying hydrogical cycle. It takes away habitat for species that might 'climb up', including some humans who might go north to pursue cool, peaceful and natural. climate change adaptation money should be going into preserving CO2 etc GHG sinkx rather than blasting hundreds of tons of 'ledge'.

The money is there and we need to get it to preserve the right places, values and economies. It is not New England Big Wind - ridgeline or coast.

Whether it will all come down to supposed 'capital investment'/economic development for sparsely populated areas through taxes and 'jobs', that is easy-- The capital comes from 'away' and goes to 'away'. Even the jobs are 'away' especially the permanent ones. If USa xcontinues to think a firetruck is worth it, we are in huge trouble.

Know what I just read? 2008 demarcates not the big recession or big bailout, or any economic indicator, but a huge 'tipping point' that urban population exceeded rural in the USA. The water wars are over a century old, and so are many of the energy wars.

Let's come out on top. Maine is not Saudi for wind resource or for values to destroy it for mere firetrucks. And those miles of northern New Engl is the 'best' New Engl has to offer for miles of ridgeline ledge to be blasted to rubble. I assure you that it is just as bad on the coast, but more people and less pristine but loving what we have of this natural world AND YOURS just as much.

Comment by Paula Moore on July 7, 2015 at 8:03pm
Just a reminder that the reason these egregious wind projects are going up in such beautiful areas is because Main's contentious wind law makes it very easy for wind developers. After many years of trying to get bills through the legislature to make this a wind law that benefits Mainers, instead of out of state developers, and failing. Our only hope is the citizen initiative. I hope you all are collecting signatures! Contact Dan Remian!

Eric, there is a state law that requires the developer to pay a minimum of $4k per turbine to the host community as "tangible benefits".  The actual amount paid in Maine has run anywhere from that figure to around $12k.  The developers got that law passed because it allows them to constantly remind everyone that they pay the $4k. $4k is strictly the minimum because no one in these small towns has the guts to say, "No, that's a minimum.  We want $X,XXX per turbine, so they get away with $4k much of the time.  The Bull Hill project got 3 times that if my memory serves me right.  The actual host landowners get way more than that number but you can't prove it because those documents are considered confidential by law.