By Verrill Dana
Posted Dec. 28, 2016, at 12:05 p.m.
Verrill Dana environmental attorneys Juliet Browne, Scott Anderson and Gordon Smith each authored chapters of the MCLE book entitled, A Practical Guide to Land Use in Maine. The guide covers topics ranging from licensing and permitting to wind energy and shoreland zoning.

Browne, author of the chapter on the Maine Wind Energy Act, provides insights into jurisdiction for review and permitting of wind energy developments in…

Although state regulators on the Public Utilities Commission created a rule, back in 2007, that envisions the program continuing indefinitely, lawmakers such as House Republican Leader Ken Fredette are asking, so what?

“Well, let’s be very clear. The PUC does not set policy, the Legislature sets policy. So in regards to any rule, I find it almost offensive that the PUC would add a sentence that would suggest that it would go beyond the legislative intent,” he said.

About 40 communities ask to be removed, which means that wind power companies would have to go through a rezoning process to build in those places.....Milton Township is the only community where such efforts failed after opposition from a Milton landowner and EverPower Wind Holdings, which wants to build a 40-megawatt wind project.....…

It was beyond our comprehension how a 34-foot wide roadway could be engineered on steep slopes and through several piles of glacial boulders, Mack-truck size, along with some larger stand-alone boulders.

There’s a photo of me in front of one three times my height, near a stake marked “T#10.” The good news is that turbine #10 was eliminated from the project, and that boulder will not be among those blasted.

That was the major change made: elimination of the turbine most visible…

The lack of transmission lines keeps wind and hydro projects at bay.

"Many residents and politicians support a transition away from power plants fired by fossil fuels."

NEW from the EIA: Electricity a Virtual Non-Factor in Maine's CO2 Emissions

Based on data for the most recent year available, 2013, only 8.9% of Maine's CO2 emissions were the result of electricity generation. This makes Maine the fourth lowest state in the nation based on this measure. The same figure for the nation is 38.3%, more than four times higher.

QUESTION: So why destroy the state's natural beauty (the reason Tourism is such an economic driver in Maine) with wind turbine and transmission blight in an effort to make "clean"…

Ole Amundsen III said his resignation was a “very difficult” decision based on quality of life. He’s been making a 2½-hour round trip daily from his home in Waterville on Interstate 95 and an increasingly congested Interstate 295 – a commute that contributed to a very busy year professionally and personally.…

If I killed a bald or golden eagle, both of which are considered “protected,” I would be subject to fines of up to $100,000 and jail time of 10 or more years. Yet, the misguided White House has given wind farms …

Since arriving in Congress as part of the Republican Tea Party wave elected in 2010, Mick Mulvaney has been one of the most pugilistic advocates for cutting government spending.

“We are going to do great things for the American people with Mick Mulvaney,” Trump said Saturday in an e-mailed statement. “Right now we are nearly $20 trillion in debt, but Mick is a very high-energy leader with deep convictions for how to responsibly manage our nation’s finances and save our country from…

"One obstacle to integrating large solar and wind projects is that operators need to constantly account for cloudy periods or sudden drops or surges in wind speed. Storing the output from solar and wind power in batteries can smooth those ups and downs....."…

The Pyle memo also says that the Trump administration will look at the environmental effects of wind energy, which means restricting wind power because of its effects on birds and wildlife.

For more information about the Petition to Remove Carroll Plantation from the Expedited Permitting Area for Wind Energy Development or this Substantive Review Process contact Stacie R. Beyer at (207) 941-4593, or email … 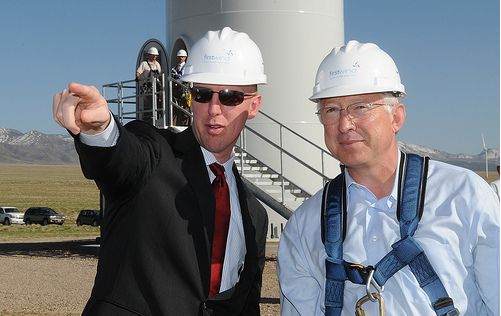 Shareholders have submitted 60 letters to Honorable Judge Bernstein, the U.S. Trustee, and the Wall Street Journal. The letters implicate at least five high-ranking businessmen and politicians of wide spread collusion, corruption, and fraud......The letters from shareholders vary in purpose and quality, but among their requests are: calls to prosecute Paul Gaynor…

For more information about the Petition to Remove Milton Township from the Expedited Permitting Area for Wind Energy Development or this Substantive Review Process contact Stacie R. Beyer at (207) 941-4593, or email …

The outcome of local, state and national voting signaled a vote of no confidence in the growth of utility-scale wind power in the Green Mountain State......

Unimpressed by the 2016 Vermont Legislature's conditional gift of slightly more say in the energy siting process, municipalities are now bypassing Montpelier. If this trend of "permission by referendum" continues, towns will have carved out a local veto power for themselves over ridgeline wind development. A new precedent is being…

While tornadoes were found to have taken down three transmission lines ahead of the blackout, the report suggests the system could have continued operating.
Instead it was the loss of power from the state’s wind farms that is thought to be one of the primary causes of the event.
The AEMO said a protection feature built-in to some wind farms, which the agency was not aware of before the blackout, caused some of them to reduce their output after a certain number of voltage…

By John Droz, Jr. -- December 12, 2016
The Alliance for Wise Energy Decisions (AWED) is an informal coalition of individuals and organizations interested in improving national, state, and local energy and environmental policies. Our premise is that technical matters like these should be addressed by using Real Science (please consult WiseEnergy.org for more information).…

There has been no compassion or relief. Officers charged by law with protecting the public health ignore or bluntly turn away concerns......please also view the complete and highly clear, peer-reviewed, easily readable review of health related wind turbine impact studies over 40 years, by Drs Jerry Punch and Rick James: The Negative Health Impact of Noise from Industrial Wind Turbines: The Evidence. It is our assessment that this document is really a…

Attorney General Mills: Gut the First Amendment
By Jon Reisman
The Maine legislature will be electing constitutional officers in December. The expected candidacy and reelection of Democrat Attorney General Janet Mills will have important and far reaching implications for climate change policy, freedom of speech and association, partisan temperatures and the 2018 gubernatorial election.
Mills, daughter of a prominent western Maine family, has served…

At a meeting Friday in the Capitol Plaza Hotel, Stephen Ambrose, a sound consultant and member of the Institute of Noise Control Engineering, argued that sound levels permitted in Vermont are too high and are causing sleeplessness, distress and other health-related symptoms.…