Over Fifty thousand "Green Energy" comments for the ages.......... are now lost Green Cartel gets Planet of the Humans pulled from YouTube

With over 9 million views, tens of thousands of comments expressing outrage and discussing the incredible fraud behind "Green Energy"...............The Swamp finally gets "Planet of the…

With "Green" comes hidden animal cruelty on a mass scale

Rehab facilities that take in wounded raptors from wind projects have been silenced like many others, with dirty money. A Wind Turbine Mass fatality event was reported in Minnesota on April 22-24, 2020. Will the green cartel blame this carnage on a building light being left on or something else besides a turbine blade spinning at 200 mph?  Will they produce images of the carcasses from this event?  Or will a corrupt USFWS cart off the bodies like they always do and eliminate all the evidence?

These green energy fatality events have been taking place for decades, but have been covered up. If the Justice…

For looking the other way and for filing meaningless legal actions, conservation groups are paid very handsomely from wind industry developments.  Audubon has reaped great rewards from wind energy developments for remaining silent about our birds and eagles being  annihilated. … Knowing your enemy is important and this enemy is killing our world.

For the wind industry fake research has enormous offsetting mitigation consequences. It saves the wind industry billions every year. It also keeps conservation groups happy because they get paid a bundle to keep their mouths shut.

So is this recent bald eagle survey from Ohio true? After all it was compiled by "Citizen Scientists". Here is my expert honest opinion..... What a pile of S***. It's just a…

Corruption is routine with the wind energy cartel 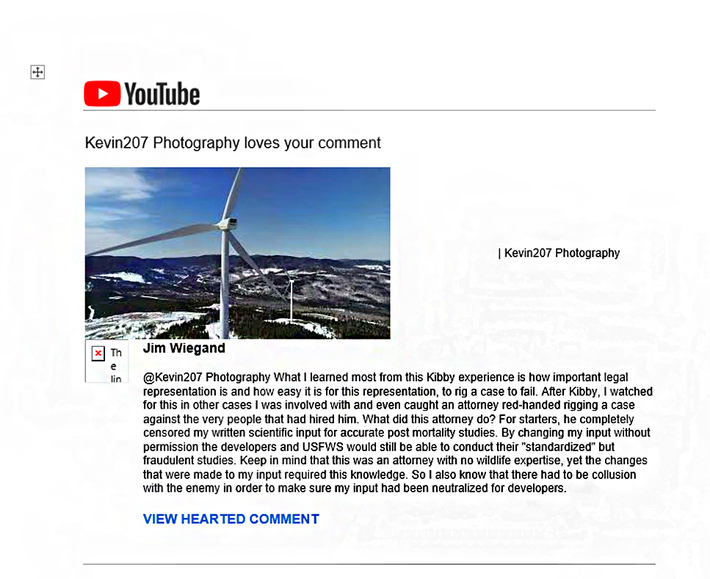 At this post is an outstanding example that exposes a fraudulent opinion being given by the Sierra Club. This is an opinion being used in the media to help sell bird slaughtering wind projects. As pointed out, there is no scientific validity for the opinions being given. …

My endangered species comments sent in to New York State Worth seeing and sharing because it's true 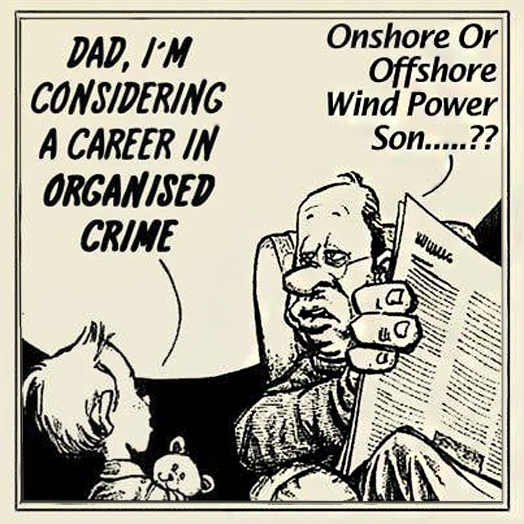 This easy to understand post that illustrates  and give readers a peek into the imaginary world of wind energy impact research.  The turbines at this site are about 400 feet tall and on a windy day, can easily launch small bird carcasses several hundred yards.

A nocturnal mass fatality event occurred at this wind farm.  A huge Turbine just 50-100 feet away?   Weekly/biweekly research cancelled because a large number of…

One primary reasons is because they have chosen to be silent about the biggest environmental disaster to ever hit bird species, wind energy. They have also completely avoided scientific research, even though they could afford to conduct their own credible…

The media and National Audubon are such liars 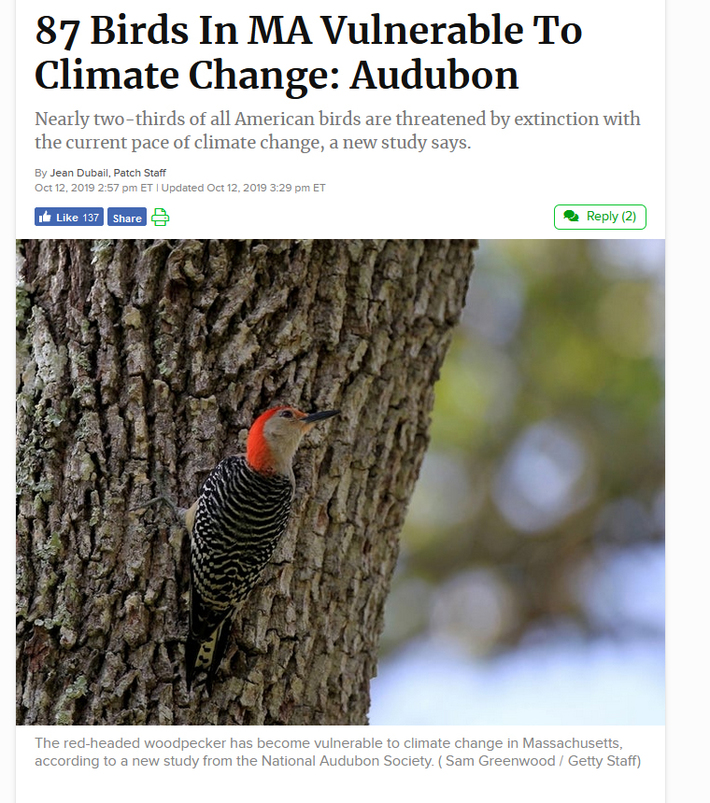 I'm not a fan of the media or National Audubon these days because they are such liars.

Studies these days are written to deceive and lie by omission. I call it fraud because the pattern of using contrived nonscientific research methodologies is so pervasive. Of course Audubon is happy to rely on and endorse these fake studies that divert attention from…

Corrupt swamp dwelling agency, the US Fish and Wildlife Service has to go

Besides hiding the origin of death for over 57,000 eagle carcasses (since 1995) sent to their facility in Denver, this is another good reason why the government agency known as the US Fish and Wildlife Service has to go. With these guys in charge and if there is a corporate dollar to be made, there will be no wildlife left.

With not one shred of valid research about the Hawaiian Hoary bat, a critically endangered species, the USFWS made these "Incidental Take"…

Due to an increase in wind energy eagle carcasses, the Denver Eagle repository is secretly expanding again

Pay close attention, due to an increase in eagle carcasses, the Denver Eagle repository is expanding.

In the meantime, the USFWS claims to be "Protecting America’s Wildlife":… 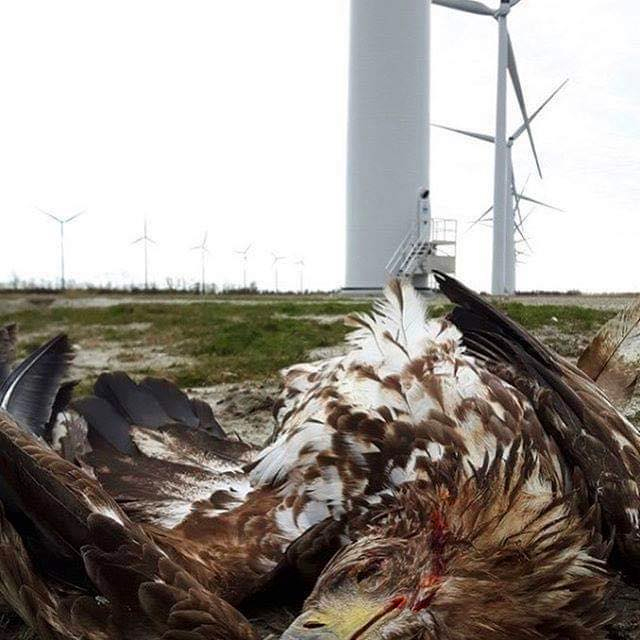 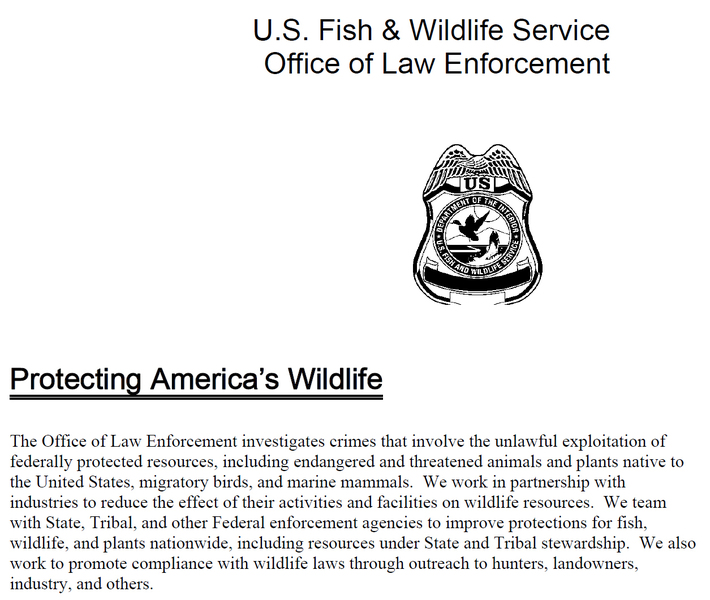 Do not let these Green Nazi's hide their atrocities - Please circulate

This is an image of an eagle found still alive with a wing cut off from a wind turbine blade. It was sent to me by Ulla Falkdalen.

Many of these eagles live for days before dying. The eagle in the second image was located nearly a month after its outer wing tip was found under a turbine.

I have all the documentation on this.

Was this Whooping Crane mortally wounded by a wind turbine?.... I say Yes

If true, would the Interior Department ever tell you?  Based upon the thousands of eagles killed by turbines that we have never been told about......I say never.

Here are a few snippets from the troubling court testimony given by a top medical examiner for USFWS. This is testimony given about a Whooping crane that was found dead shortly after reaching the Aransas National Wildlife Refuge in Texas. This crane had migrated 2500 miles and along the way, sustained a very…

A very sad story about a Bald Eagle and corruption This is a story about a Bald Eagle, likely smashed by a turbine blade, then covered up, that died after days or even…

How can wind energy possibly have an impact on carbon emissions and climate?

Check out this risk assessment radar study conducted by Stantec

This bogus study was conducted in Humboldt County to assess the risk to Marbled Murrelets from 60- 600 ft tall turbines, spinning with blade tip speeds up to 300 mph.
As I stated in another earlier post, there are a number of problems with the Stantec radar surveys conducted for this project. Nobody should accept them as being accurate or even…