Look close at these two wind turbine fatality lists. One is from 1.5 MW wind turbines, the other from 2.3 MW turbines. These two images clearly illustrate a wind energy and government fraud, hiding green energy's mortality to species. The data in one list, I consider accurate even though daily searches were not conducted and search areas should have been out to at least 150 meters from towers.

The other fatality list, from Wolfe Island, is impossible for turbines 60 feet taller and with blades over 10 meters longer. Where are the handcuffs and prosecutors? Ridiculous carcass search areas of 50 meters were set for the massive Wolf Island mortality studies. Looking at these two lists is proof of the mind boggling layers of fraud taking place with wind industry studies. When studying these two lists and their respective carcass distances, it should be crystal clear to anyone, that the Wolfe Island studies were absolutely rigged.

It is my belief from analyzing the fake Wolf Island studies, that tens of thousands of fatalities took place around these turbines and many of the high status species that were actually slaughtered, were not disclosed. Species that come to mind......... gyrfalcons, merlin, bald eagles, snowy owls, barn owls, short-eared owls, rough-legged hawks, northern harriers, red-tailed hawks, kestrels, sharp-shinned hawks, coopers hawks, goshawks, golden eagles, peregrine falcons, great grey owls, hawk owls, osprey and a multitude of waterfowl species, all suspiciously absent from the fatality lists.

Wolfe Island is not alone. This research rigging has been taking place for decades. Fake experts are routinely producing this garbage, while our highly protected wildlife is being systematically slaughtered off one project at a time. I encourage everyone to copy these lists and present them to the slimy turbine peddlers at every community meeting concerning any newly proposed wind projects. 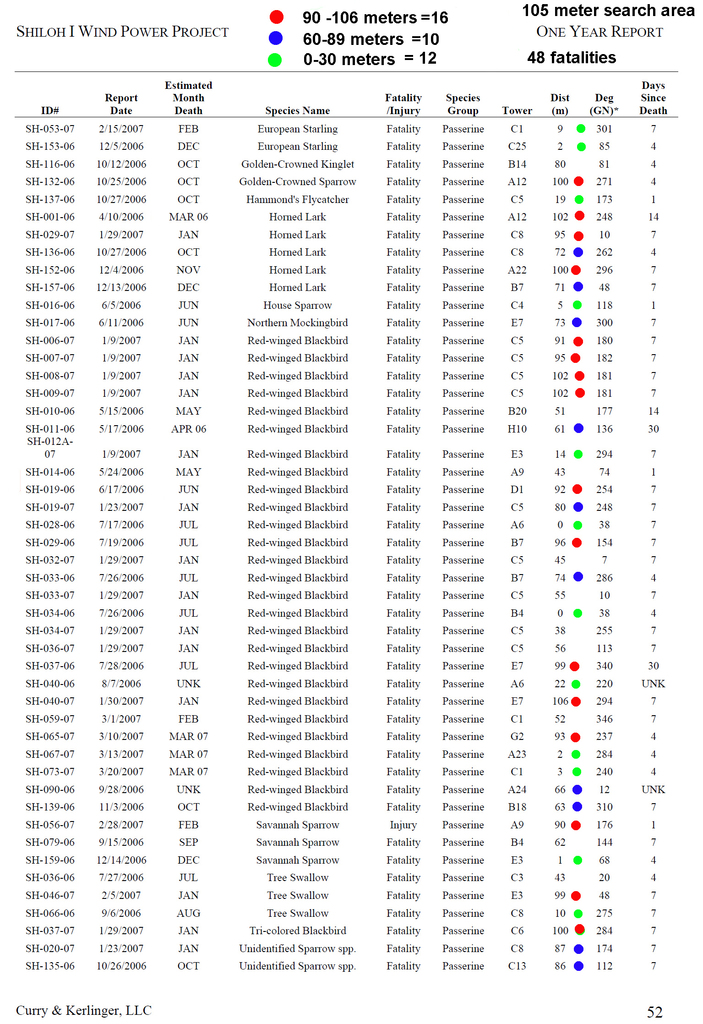 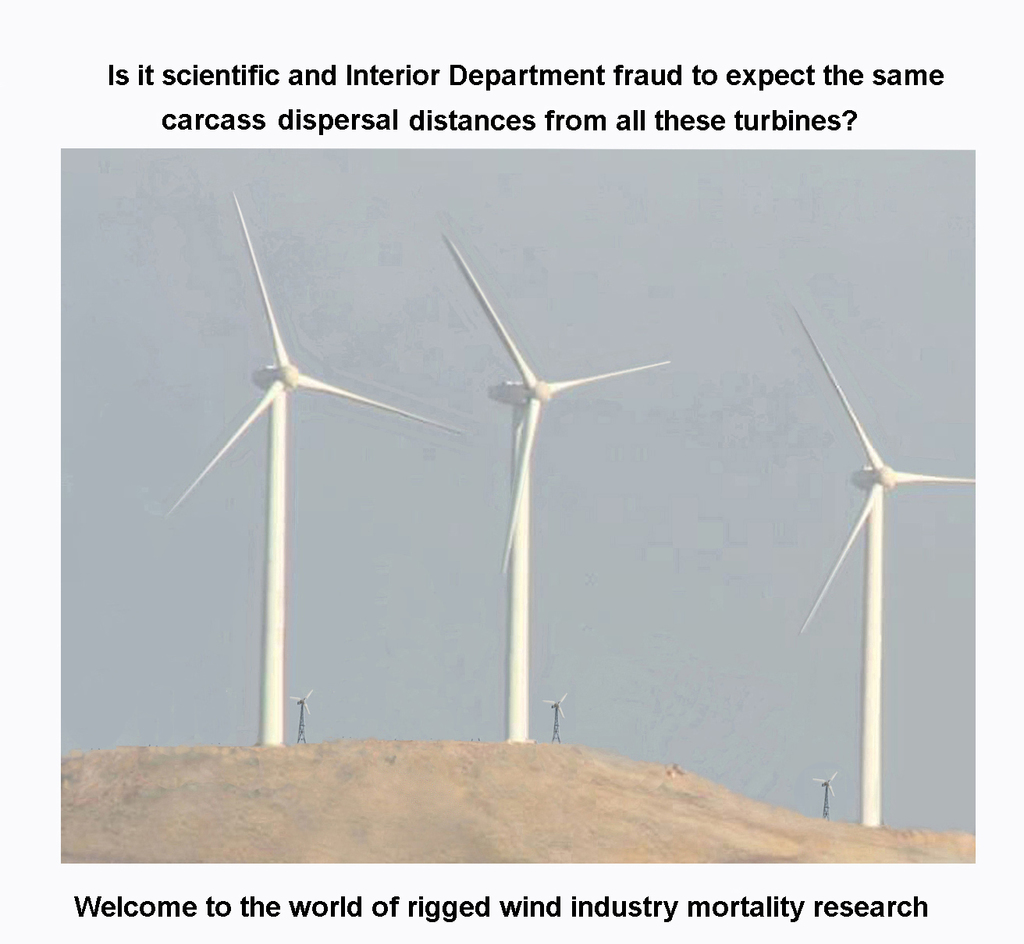 I want to make something very clear to everybody concerned about wind industry impacts and corruption.......... Shawn Smallwood’s testimony and opinions given about Wolfe Island's turbine mortality are not even close.  Just based upon the lack of study control, tiny search areas (1/6 of 50 meters) and not having daily searches, the actual bird mortality numbers are probably 5-10 times higher.  Smallwood’s articles may be peer reviewed, but this club endorsement means about as much as Obama giving himself the 2009 Nobel Peace Prize. While Smallwood's research fits nicely into the wind industry's low contrived research standards, his research conducted at Altamont is not scientifically sound and it has had fatal flaws since 1998.

One big flaw, his incredible and ridiculous 30-90 day carcass search intervals. There are many more examples I will be happy to expose someday if I can ever get an honest lawyer to cross examine him with appropriate a questions.

If I could give this guy a Yelp review, it would be 1/2 of a star. The rest of the wind industry's researchers I could never give any. Keep in mind this means little because for the wind industry,no stars equals more turbines and profits.

Here is an interesting quote from Smallwood (2005) writing about mortality around the small 60-100 ft. turbines in use at Altamont. These turbines are 300-340 ft shorter than the Wolfe Island turbines....

................ "Also, the reported search radii are too short in many of the studies. The search radius needs to be expanded in relation to the size of the turbines being surveyed, with a minimum of 70 meters used for even the shortest of turbines currently in operation”

Testifying in Canada about 400 ft tall turbines....... "Dr. Shawn Smallwood was qualified as an ecologist with expertise in avian wildlife behaviour and conservation. In addition to 70 peer-reviewed publications Smallwood has done research at the Altamont Pass Wind Resource Area (WRA), a California wind project notorious for its high raptor mortality.

Smallwood told the ERT that impact monitoring at Wolfe Island indicates the highest avian fatality rates in North America other than at Altamont Pass WRA. Based on methods commonly used across the rest of North America, Smallwood estimates that Wolfe Island kills 21.9 birds per turbine per year. This is nearly twice the number reported by Stantec using searches only within a 50-foot radius, less than half of standard practice. Smallwood considers Wolfe Island one of the most dangerous wind projects on the American continent."

Just think of what the mortality  estimates would be if wind turbine mortality were not based upon on this industry’s rigged research methods "commonly used across the rest of North America."  The public would be horrified knowing they have unleashed a green energy genocide upon the world.

Lots of Data here
Thanks Jim ! 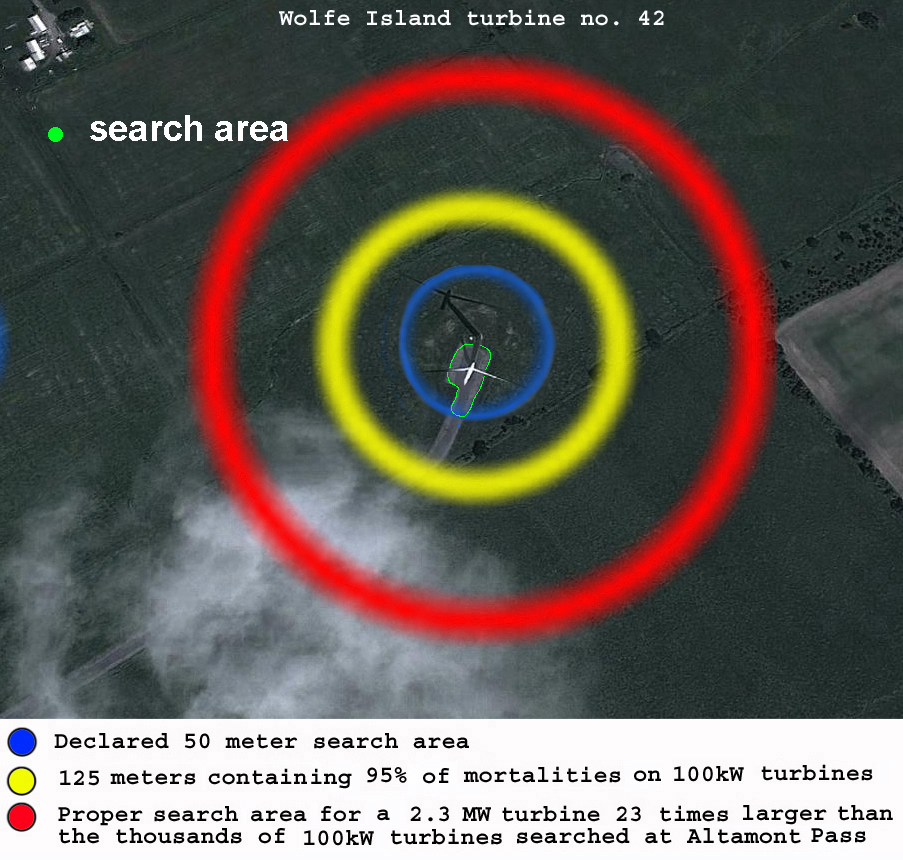 Links to the source lists, are they available ?

This one list shown was to show the extent of the mortality rigging at some wind farms. Bats were killed at Shiloh and they are listed in this image. 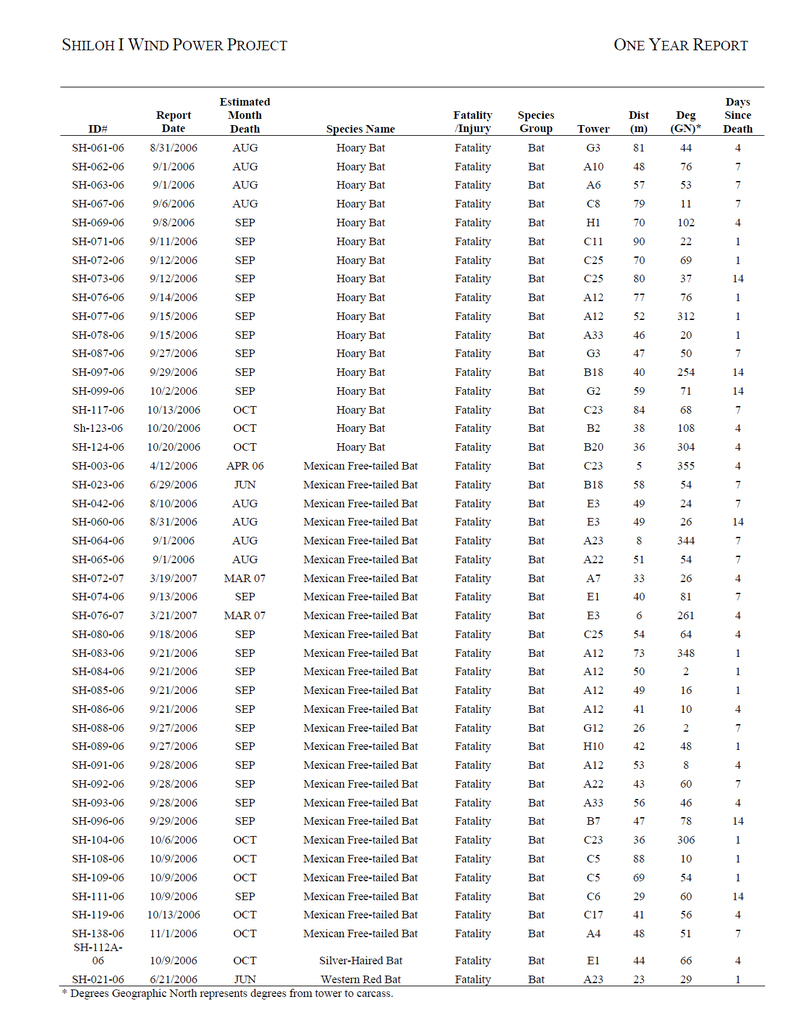 Injuries sustained;  "Just a wing".  Begs the question, what happens to the injured birds when "just a wing" is injured. No bat fatalities at Shiloh?  Do any of these observers ever talk about what they see on the job?  Are there any independent mortality studies or is the information so proprietary that no outsiders are allowed?