Wind Turbines Only Generate Power Between 6 MPH and 50 MPH 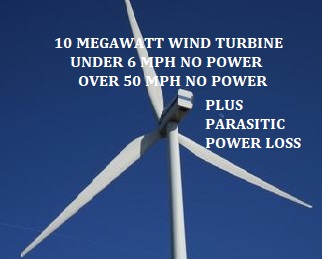 Wind Turbines Only Generate Power Between 6 MPH and 50 MPH

Renewable energy experts say a single standard 10 megawatt ocean wind turbine can power up to around 13,000 homes. The problem is the wind would have to blow 49 mph 24/7.
This statement means that the maximum power at perfect conditions of wind speeds of around 49 miles per hour the turbine generates the maximum amount of its power. A 10 megawatt wind turbine will generate enough power for 13,000 homes. Each megawatt of a 10 megawatt turbines equals around 1300 homes.
Wind turbines only operate between the cut in and cut out speeds usually 6 miles per hour to 50 miles per hour.
Wind turbine cut-in speed is the minimum wind speed required to make the blades start rotating and generate the minimum amount of power at around 6 miles per hour.
Wind turbine cut-out speed is the maximum wind speed and generation that a wind turbine can handle before it shuts down using its brakes to prevent damage around 50 miles per hour. Sudden wind gust from different directions can also shut down a wind turbine.
Wind generation formula in general :
At below 6 mph: no power
At above 10 mph: 1 megawatt
At above 20 mph: 3 megawatts
At above 30 mph: 5 megawatts
At above 40 mph: 8 megawatts
At 49 mph:             10 megawatts
At above 50 mph: no power  brakes on
During hot summer days it is possible to have very little generation from a wind farm.
During winter months during winter storms it is possible to have very little generation.
Note # Wind turbines have an addition issue the same of all power plants. It's called parasitic load. A  single wind turbine needs its own power or an outside source to run heaters, brakes, air conditioning, de-icing elements for blades, rechargeable battery banks, computers and communication equipment which could take 10 to 15 percent of its own power.
Note #  Most wind turbine manufactures do not include the parasitic power usage in the power ratings of their own wind turbines.
The bottom line :   Wind energy produces costly, intermittent, unpredictable electricity