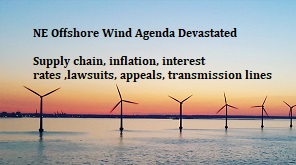 One of seven offshore wind companies south of Massachusetts facing supply chain issues dropped its installation goals until perhaps next year. The increase in interest and high inflation rates have created the need to renegotiate contracts before any steel goes in the water.
-
Two major international ocean wind turbine manufacturers recently squared off in a Massachusetts federal court over patent infringement.
-
On September 7, 2022 a Boston federal judge barred one wind company from making and selling its wind turbines in the United States, after a jury found in June 2022 that the turbines infringed a patent owned by the rival company. The judge said the ban was entitled because of a significant market share loss based on the infringement.
-
As of September 30, 2022 one company argued that the jury in the federal trial made an  "irreconcilably inconsistent" finding in the federal patent infringement.
-
Offshore wind companies also face opposition from local residents in Rhode Island and Massachusetts over the installation of high voltage buried cables through their neighborhoods. The offshore wind companies have asked the states to bypass local town health and zoning board regulations. It's cheaper to go by land to the electric grid rather than run an ocean submarine cable to Boston from the offshore wind sites.
-
Falmouth, Massachusetts a proposed buried cable route was involved with ten years of land based residential wind turbine litigation in which case turbines were demolished last month.
-
The Bureau of Ocean Energy Management (BOEM) a federal agency applies a four-phase process in the authorization of an offshore wind development: 1) Planning and Analysis; 2) Leasing; 3) Site assessment; and 4) Construction and Operation. Any major changes to ocean wind plans need to be revised through the agency in a timely fashion.
-
Twenty years ago an ocean wind company spent 50 million on a project that was proposed off the coast of  Cape Cod Massachusetts. The company failed to meet construction deadlines, financing dropped and was denied permission to build an electric transmission line onshore.

"GE expects its renewable energy arm to lose about $2bn in 2022 after posting a deficit approaching $1bn in a third quarter alone that showed the massive pressures facing the US giant’s wind power operation.
“We’ve all been disappointed with our year to date performance," said CEO Larry Culp on an earnings call, referring to renewables.
GE Renewable Energy lost $934m in the three months to September 30, including the impact of $500m of warranty and related reserves, lower volume in its key onshore wind business and inflationary pressures across the board."

damage to marine life, due to electro- magnetic effects of cables, and underwater infrasound of wind turbines

damage to fishing communities, due to a lack of fish; it moved elsewhere or died out