Summertime, and the living is breezy --- NOT.

UMPI's $2 million (and counting) wind turbine experiment is clearly elucidating the gross failure of wind power in Maine. In the last three days, this folly of academia has produced a whopping 2,877 KWH, or only 959 KWH per day.

Let's also take note that the 1,000,000 KWH per year goal was a ridiculously low goal to begin with, equating to a foolishly low 19% efficiency factor. The only way an electricity generator survives at 19% efficiency is by being artificially propped up in a phony unsustainable world of heavy big government subsidies - otherwise known as our tax dollars.

Well, despite the absurdly low 1,000,000 KWH a year 19% goal, in the first 39 days of Year 2, the UMPI money waster has been at an efficiency factor of only 10%. Kind of like putting 20 gallons of gas in the tank and finding out later you only really got two.

Can the cash-strapped University of Maine system really afford to offer this $2 million spinning class? 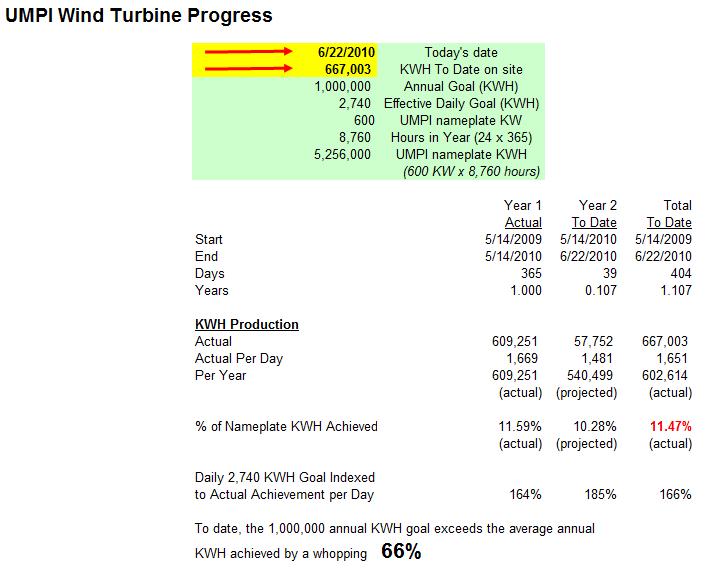 Comment by Art Brigades on June 22, 2010 at 10:30am
I don't know. Just based upon their inability to produce a competitve electron, my guess is Maine's will be rusting and abandoned by 2020. The industry typically predicts 20 years. (But you know how they sugar-coat things.) Here are two links that are useful:

Comment by Art Brigades on June 22, 2010 at 9:40am
At today's market rate of 15 cents per KWH, this means (generously) that UMPI is getting $81,000 worth of electricity per year. That puts the turbine on schedule to break even in 25 years...assuming that maintenance, labor, and replacement parts will be free. Also assuming that electricity prices in the market stay at 15 cents over the next two decades. Don't these silly machines only have a life expectancy of 12 years? There's no such thing as a "failed" experiment if the experiment teaches something. This experiment teaches UMPI students that wind power is a failure. Stop throwing (public) money at it.

Comment by Karen Bessey Pease on June 22, 2010 at 7:09am
How refreshing, to FINALLY have some real and live data! How to get this information out to more Maine citizens? This is the REAL story, which needs to be told! Thanks for reporting!
Kaz