UPDATE on 7/26/13 - from the UMS website, it would appear that Governor LePage has just extended the terms of two of the three UMS Trustees whose terms expired back in May, when we last reported on this. They are Michelle Hood and Kenin McCarty. (See bios below).

There is still one person whose term expired 5/26/13 who has not yet been replaced, Eleanor M. Baker.

As a result of the two extensions, Governor LePage has either appointed or extended 10 of the 16 UMS Trustees.

Bring on the truth UMS. It is way overdue.

All meetings are open to the public.

Ms. Hood received her Bachelor of Science in 1978 at Purdue University and her Master of Health Care Administration at Georgia State University in 1981.  Her early career included roles of Associate Hospital Director at Emory University Hospital in Atlanta, Georgia, Executive Vice President and Chief Operating Officer of St. Vincent’s Hospital in Birmingham, Alabama, and Chief Administrative Officer of Norton Hospital in Louisville, Kentucky.

With responsibility to more than 8,000 EMHS employees and a half of a million Maine citizens, Michelle’s primary function is to provide vision – vision that anticipates both advances and obstacles in the complicated and ever-changing landscape of healthcare.  Her focus is on health care policy developments at the state and national levels, with a view to the  very specific needs and challenges of a vast, rural, and sparsely populated state.  With her eye on the horizon, she works to strengthen the economic climate of the state, build a strong and stable network of health care services for a vast geography and make EMHS a great place to work for the many dedicated professionals who make medicine work in rural Maine.

Ms. Hood is helping to strengthen Maine’s ability to provide the best possible health care to everyone in need by recognizing opportunities to capitalize on existing resources, finding ways to fill resource gaps, making connections, and building creative partnerships that work for Maine communities.

Mr. Kevin P. McCarthy is President and CEO of Unum US.  In this role, he is responsible for the overall management of the segment (formerly known as US Brokerage).   Mr. McCarthy first joined Unum in 1976, working in field administration.  He moved to the reinsurance division as an underwriting manager, became a product manager in 1980, and was subsequently promoted to second vice president, Life and Medical Products in 1982.  From 1984 to 1987, he was chief operating officer for General Health, Inc.  In 1987, Mr. McCarthy returned to Unum as vice president, Long Term Disability Products and Markets and was named vice president, Long Term Care Markets and Products in 1990.  In 1993, Mr. McCarthy joined Unum’s Japan operations and was promoted to President of Unum Japan in 1996, Chairman in 1998, and Senior Vice President of International Operations in the same year.  In 2001, McCarthy became Senior Vice President of Underwriting and in 2006 Executive Vice President of Risk Operations for the company

Mr. McCarthy is currently a director of the Davis Foundations, the Maine Coalition for Excellence in Education, and AHIP (America’s Health Insurance Plans).   Mr. McCarthy has previously been the chairman of the Insurance Subcommittee of the American Chamber of Commerce in Japan, where he was significantly involved in U.S.-Japan bilateral negotiations regarding deregulation and market access.  He has previously been a director of LIMRA International, the International Insurance Council, the Maine International Trade Center, the World Affairs Council, the Portland Museum of Art, the United Way of Greater Portland, the Maine Make-a-Wish Foundation, the Gulf of Maine Research Institute, Corporator of Maine Health, the state’s largest healthcare provider group, and Chairman of the Advisory Council for the University of Southern Maine School of Business.

Update - the three trustees' terms have expired. It's now more than ever to get the right people on that board.

On May 26, the terms of three UMS trustees appointed by Governor Baldacci will expire. The UMS Board, which includes KURT ADAMS of First Wind has blindly supported all things wind power. So please urge Governor LePage to appoint anti-wind empiricists as the three replacements. This should help move us closer to the point where the UMS board can hopefully re-appraise its blind rush into wind.  We need the University to be a voice of reason instead of a wind industry propaganda source.

The Governor's Director of Boards and Commissions is Michael Hersey:

The Director of Boards and Commissions develops and operates the organizational and procedural structure for gubernatorial appointments to nearly 400 boards and commissions.

Please write to Mr. Hersey and if possible please consider submitting a name for consideration. UMS Board of Trustees Approved UMPI Turbine in "Lovefest"

"The University prepared carefully for a discussion of the wind project at the September meeting of the Trustees.  It asked permission for a $2 million total cost project that would install a mid-size wind turbine on campus property.  The president and CFO were armed with data and prepared for the wide variety of questions that the project could legitimately have raised, including the possibility of instinctive dislike of wind power or too bold a campus entrepreneurial activity.  Instead of a grilling, UMPI encountered a love fest."

Following are the term expirations of the University of Maine System Board of Trustees. 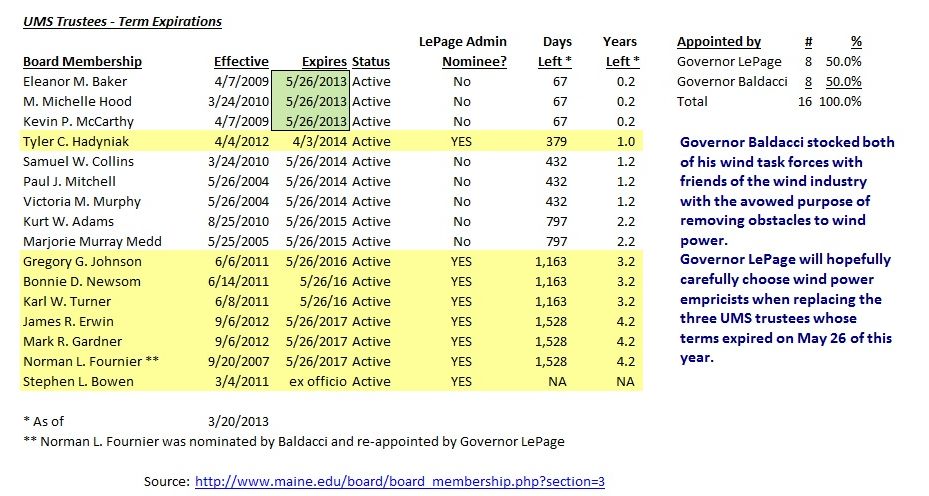 This PDF examines the history of the University's industrial wind turbine. As the sole onshore wind experiment by the state, and not an insignicant expense of $2 million and counting, we believe it should give the state pause to question the overblown electricity production promises of the wind industry, on which were based much of the state's expedited wind law that is presently creating havoc with our citizens' health, citizens' rights, wildlife, quality of place, town social dynamics and electricity/transmission rates.