It's near impossible to get electricity production data from commercial wind complexes. So it is refreshing that UMPI has pledged to the people of Maine to share the data on electricity production from its $2 million wind turbine.
For those of you who thus follow the UMPI wind turbine progress with the same fervor as your favorite sports team, the attached simple Excel file (UMPI Turbine Analysis) can be downloaded and will let you keep score.
Just go to their website and off to the right, click on "Live Turbine Data".
http://www.umpi.edu/wind/live
Then in cells H4 and H5 of the Excel file (yellow colored on the attached), simply enter the current date and the KWH to date posted on their site respectively. The sheet will then recalculate.
We are less than a month to the anniversary of its commissioning on 5/15/09, so very soon we should have a year of actual data.UMPI Turbine Analysis.xls

Comment by Long Islander on May 19, 2010 at 5:43am
The following revised scorecard shows Year 1 actuals as well as progress to date since the project's start date of 5/14/09. Project to date performance shows that the turbine is at only a miserable 11.6% of capacity. It's annual goal of 1,000,000 KWH overshoots annualized project to date achievement by a whopping 63%. 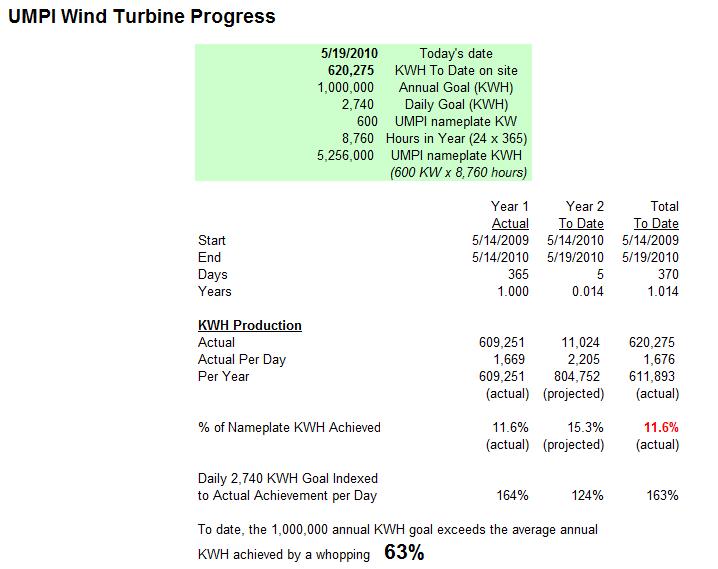 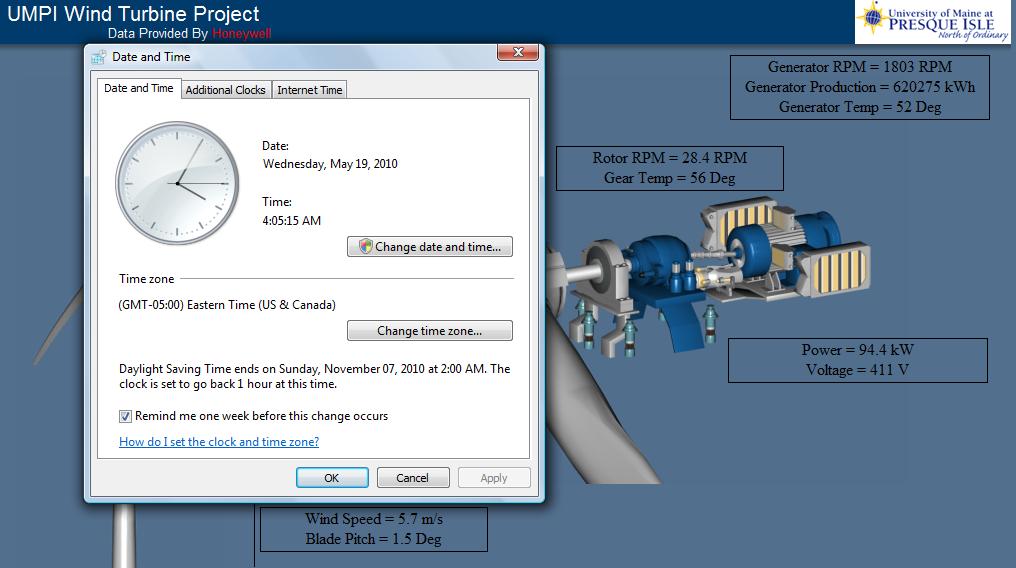 Comment by Long Islander on May 13, 2010 at 11:51am
There is now one day to go and the state's only empirical industrial wind turbine experiment, the industrial size $2 MILLION turbine at UMPI will reach the one year mark since its blades began spinning on May 14, 2009, the day it was commissioned. In 364 days of operation, the turbine has produced 605,755 KWH of electricity.

This means that the much publicized 1,000,000 KWH expected (there was even a film made about this) exceeded reality by 65%. What is particularly troubling is that the 1,000,000 KWH goal was very low to begin with. In other words, even a substandard goal was missed by a huge margin.

Another way to express this failure is that performance was at only 11.6% of nameplate capacity. This is significant because "Nameplate" is the figure that the wind industry uses when it makes claims such as "Blah blah wind complex wil provide electricity to 20,000 homes". What they need to do is multiply that by 11.6% and the number is more like 2,000. Hey, but what's a little white lie when all that is being destroyed is the Maine countryside?

If every one of the Governor's 1,800 land based turbines were to be tolerated by the citizenry, they would run 360 miles long, given the 1/5 mile minimum spacing between the 400' tall noisy ugly beasts. Add to this hundreds of miles of roads and mammoth transmission lines whose pricetag, along with wind's high price electricity, will get passed on to the ratepayer. And despite this MAJOR IMPACT to our state and the torment it creates for people living near these monstrosities, all the atmospheric cooling effected by this massive footprint is equal to what only 1% of the Maine woods do naturally. Please click on: http://www.windtaskforce.org/profiles/blogs/maines-wind-goals-co2-a...

You see, we live in the nation's most forested state and emit very little CO2 for our size. What we do have is the nation's oldest housing stock. If we caulk that we'd save enormous fossil fuel, as that's what we heat with - in a cold climate to boot. But the Governor is not really interested in that, but rather greasing the skids for his friends in the wind industry like Kurt Adams, his former PUC commissioner, now with First Wind. Baldacci even stated publically in the 1/2/10 Bangor Daily News that upon leaving office, he plans to work in energy. 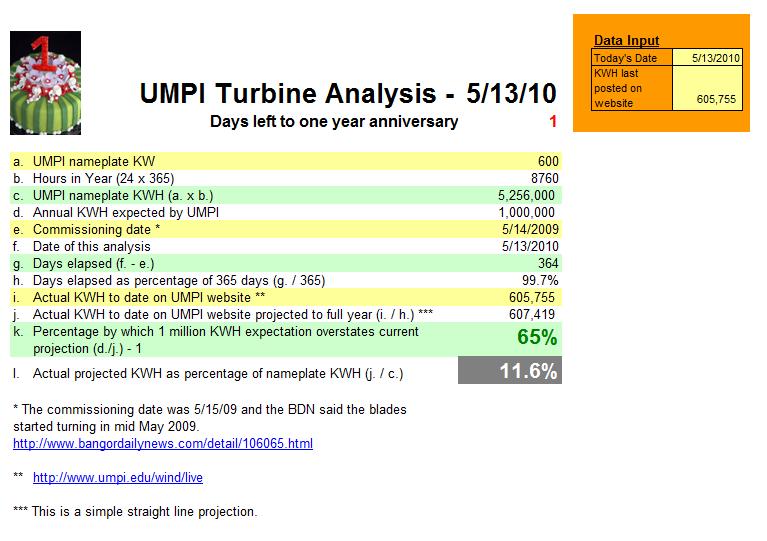 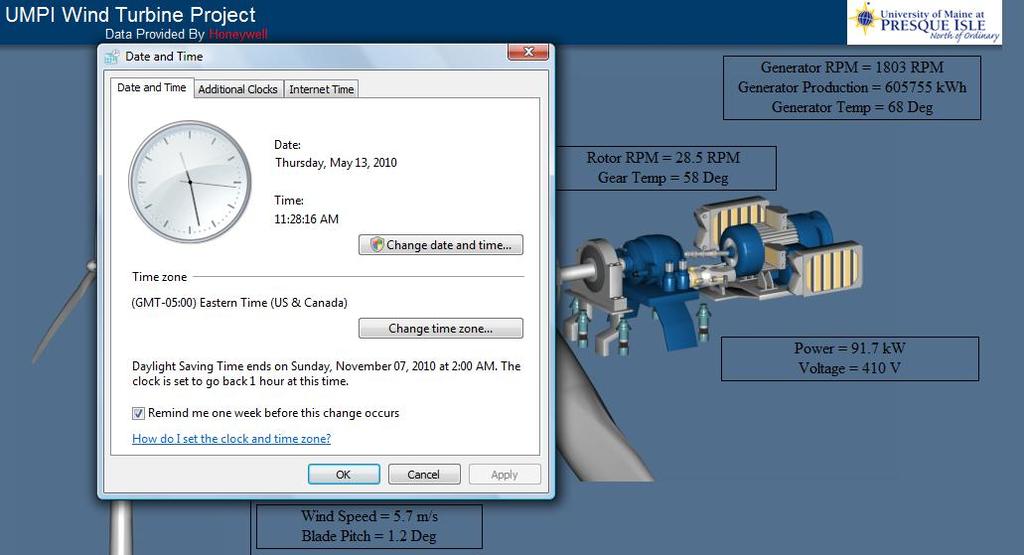 Comment by Long Islander on May 11, 2010 at 6:08pm
Three days to the one year anniversary of the commissioning.

The turbine is operating at 11.6% efficiency. 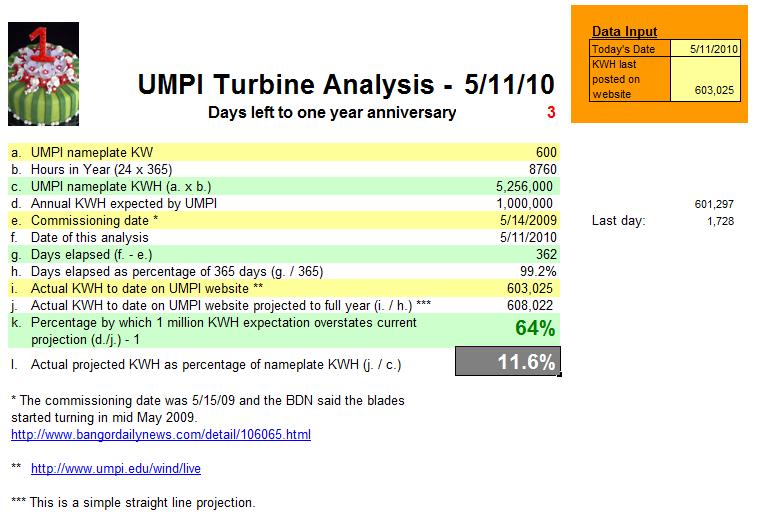 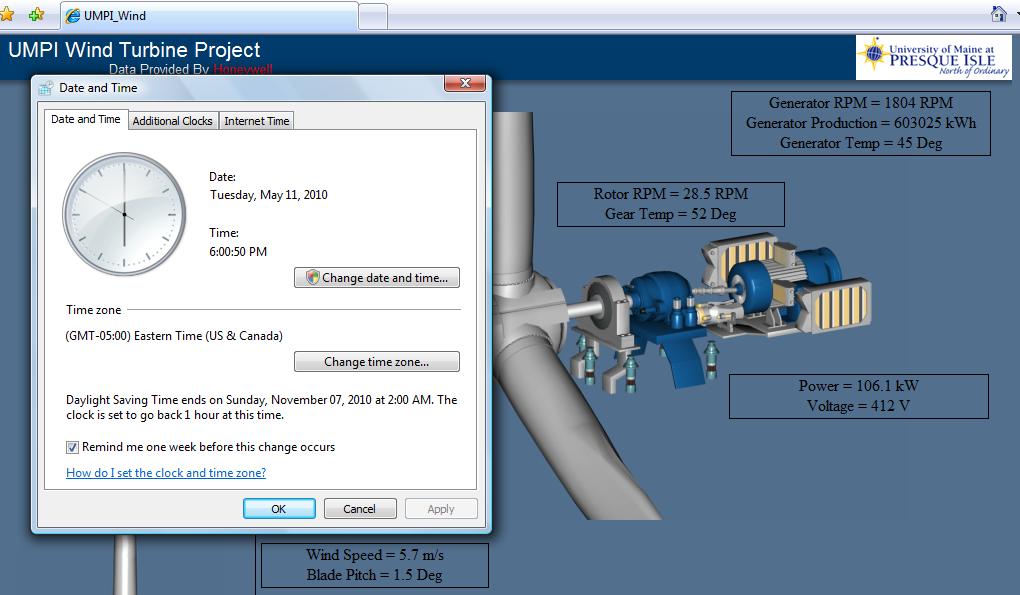 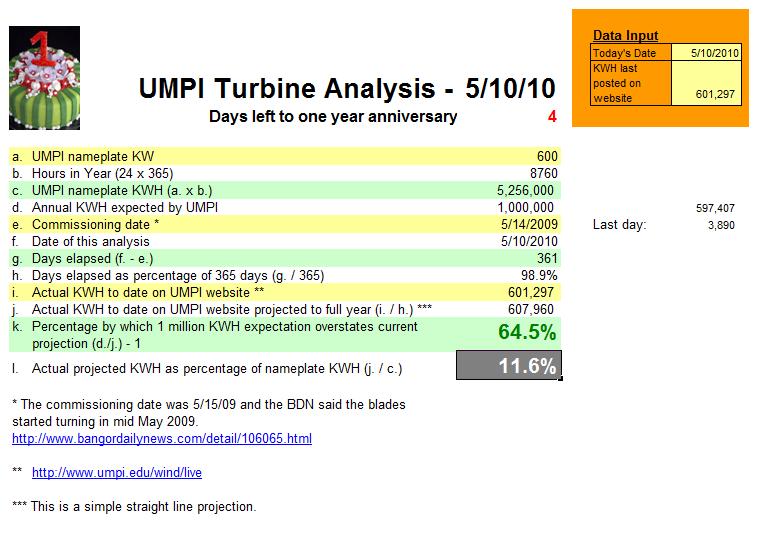 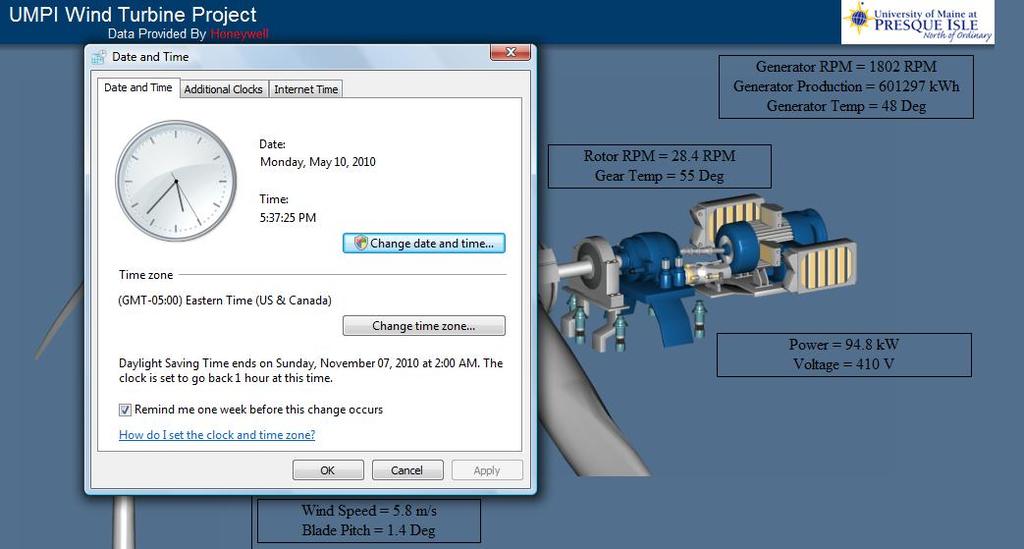 Comment by Long Islander on May 10, 2010 at 12:22pm
I don't think UMPI realized the importance of the learnings they would be sharing. As the only state run empirical experiment, it is showing that wind power in Maine is folly and I believe these disappointing results should bring everything wind in this state to an immediate halt before there is any more destruction of nature and torture of citizens. All that the secrecy shrouded wind companies have proved is that they know how to collect free government money. This state and this country can ill afford this fraud.

Comment by Harrison Roper on May 10, 2010 at 12:02pm
Thank You, Long Islander, for doing this "scorecard" and updating it. I am watching UMPI closely for a summary of the first year's power output compared to the predictied output. Power output is ultimately the most important thing, and if it is not sufficient nothing else makes much difference. Kudos to UMPI for their public sharing of information, and shame on industrial wind for not making their power output public!
Harrison Roper Houlton/Danforth

Comment by Karen Bessey Pease on May 10, 2010 at 1:42am
I tried to speak to the governor's radio address, and urged him to share the data from UMPI with the people of Maine.
http://www.bangordailynews.com/detail/143009.html

Not very confident that it will do any good...

Comment by Karen Bessey Pease on May 9, 2010 at 5:45pm
Hmmm... That UMPI analysis is something that the Maine people should hear about, don't you think? The FACTS are what will win this thing. The facts, the truth, and dedicated people who are willing to shout them from the (currently unspoiled) mountaintops. Let me see what I can do. There must be SOME newspaper which hasn't heard from me in the last week or two...(Ugh...almost 70 letters and counting, so maybe not!) Thanks for keeping on top of this, and for caring, LI. Kaz

Comment by Long Islander on May 9, 2010 at 5:13pm
The UMPI turbine efficiency now seems to have risen to 11.6%, 6 days to go to the one year anniversary. It had dropped below 11% before the mystery period when data had vanished. Even so, the project's going in goal of 1,000,000 KWH exceeds actual projected Year I performance by a whopping 65%.

In other words, industrial scale wind power in Maine simply does not work.

Hopefully the state of Maine will make this official reporting part of learnings shared during its "Maine Wind Week", which starts today and culminates on 5/15/10, exactly the one year anniversary of the only actual state experiment to date. 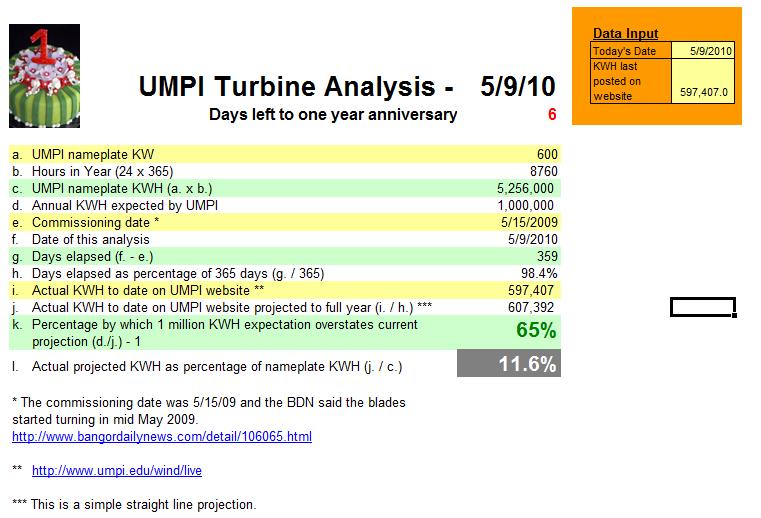 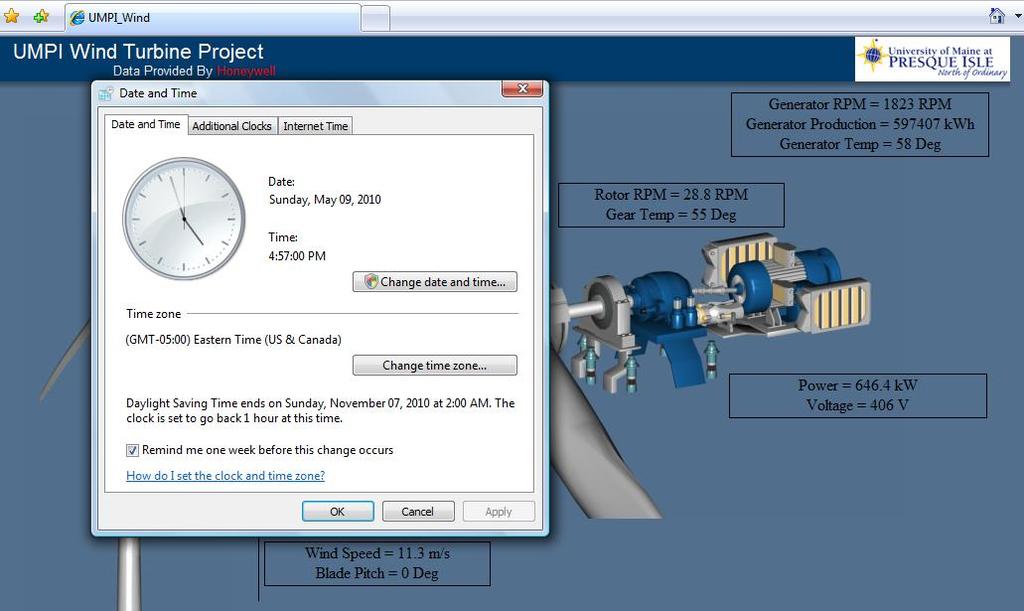 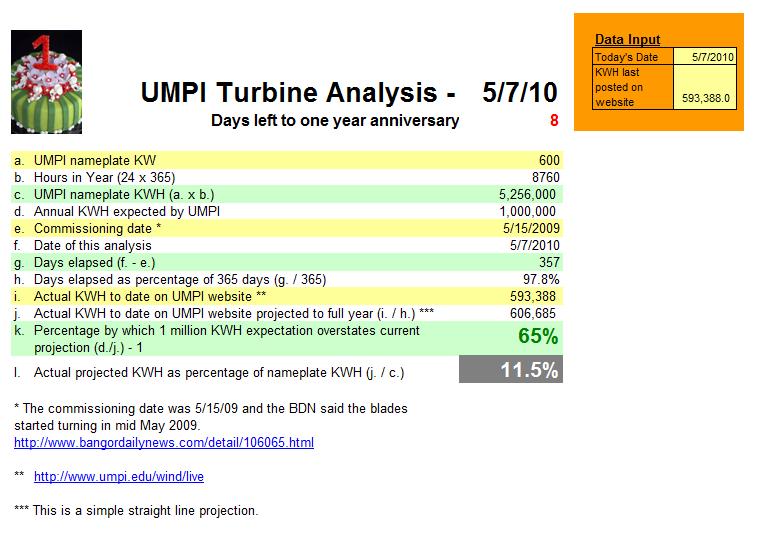 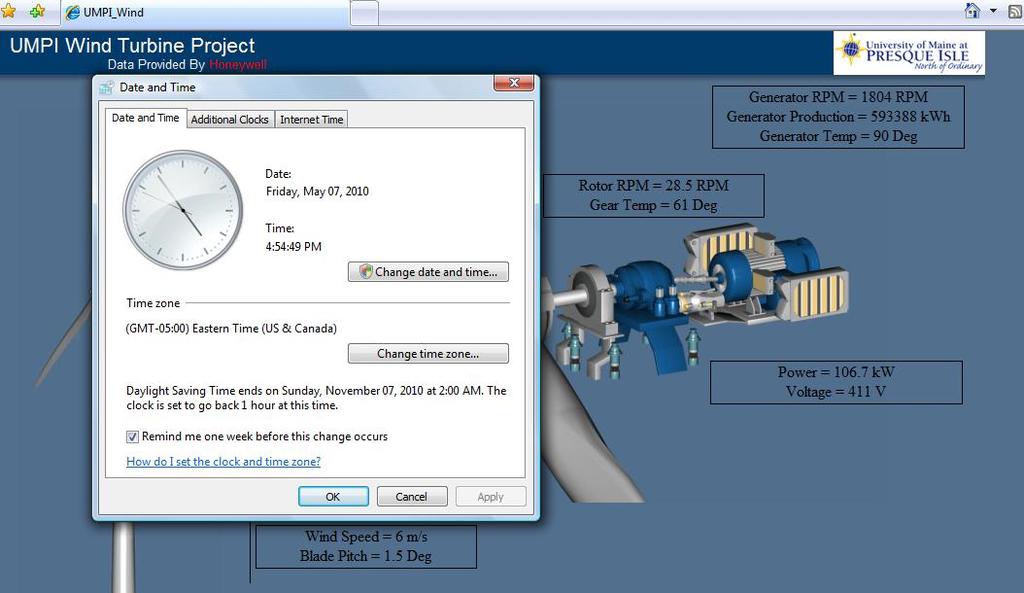