If you don't like the weather, just wait five minutes. And if you don't like your oft stated annual wind turbine goal of over 1,000,000 KWH, just change it to 700,000, which is exactly what UMPI has done on its website very quietly. In fact, the UMPI website has been WIPED CLEAN of any mention of the long stated primary goal of producing 1,000,000 KWH per year, which previously had been prominent on the site. Perhaps this simply reflects the reality that in Year One, ended 5/14/10, only 609,268 KWH were produced.

THIS IS A MAJOR REVISION.

Hopefully UMPI will explain why it has changed the goal and reveal its learning for us as promised.

What would also be useful is to understand how the long stated goal of 1,000,000 KWH per year has dropped but the goal of 572 tons of CO2 avoided and the goal of over $100,000 in electricity charges have not been similarly adjusted.

This project, which started at $1.5 million, snuck up to $2.0 million and is still racking up big maintenance costs, represents a major expenditure.

Sherwin, the 1,000,000 kWh annual projection  would have been based on a capacity factor of 19.0%. The actual capacity factor achieved since the turbine's May 2009 start has been 10.1% as shown in the following table: 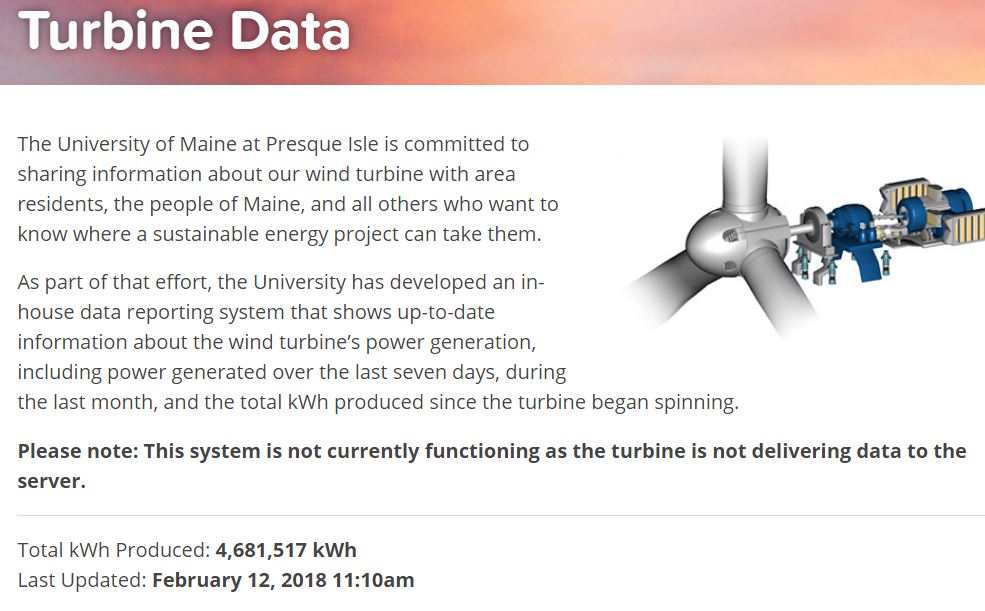 ALL OF THESE WIND POER TURBINE  ESTIMATES  ARE  BASED ON  THE WIND BLOWING/MOVING  at  FULL CAPACITY - 24/7@ 40 MPH. or greater VELOCITY !!

The last day of July. Another month wraps up and more data collects in the state's only onshore wind experiment, showing that industrial wind simply doesn't work and that we are suffering major impacts for almost no electricity production. We are almost three months past the one year mark when we were to have seen the rather pitiful goal of 1,000,000 KWH met, but we have barely eclipsed 700,000 KWH. It's at 11% of capacity folks, and that speaks volumes. It's like thinking you are filling up the gas tank with 20 gallons and running out of gas only to learn all you had gotten was two gallons. 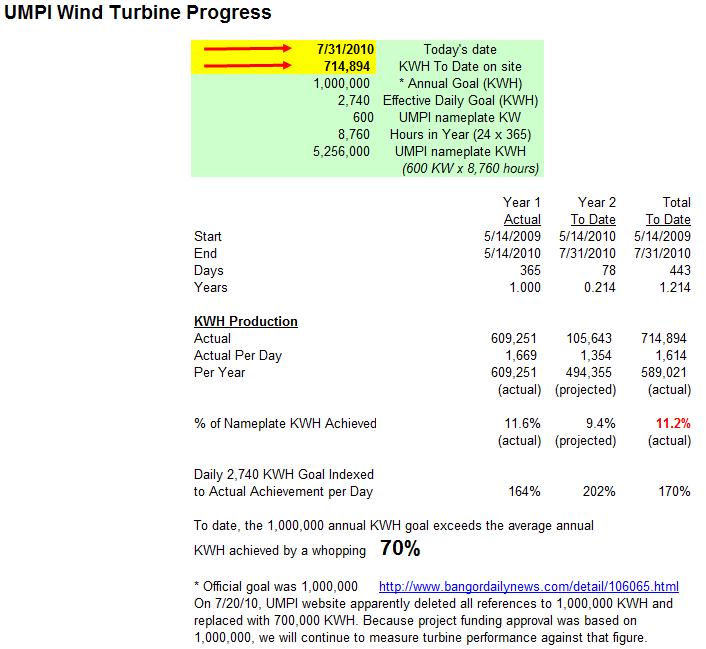 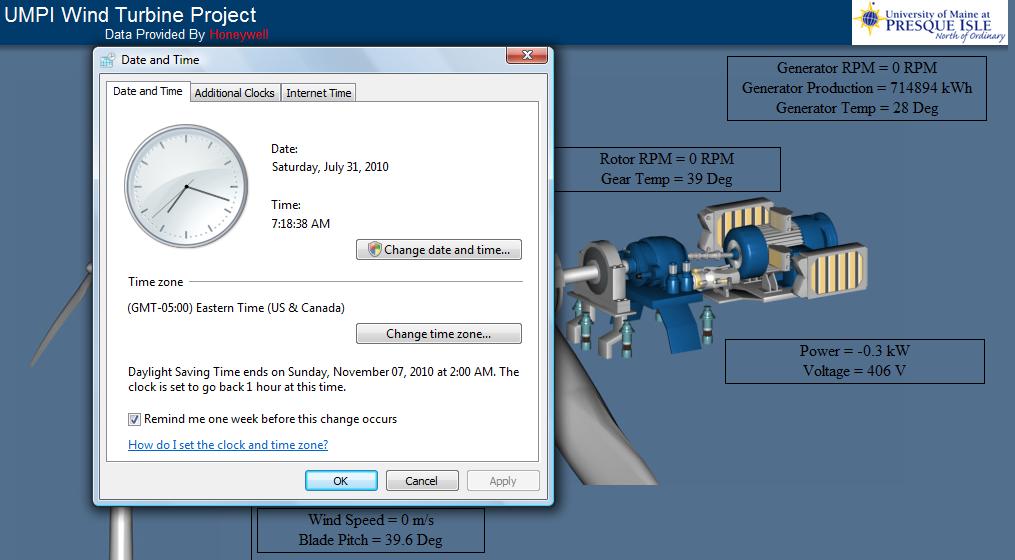 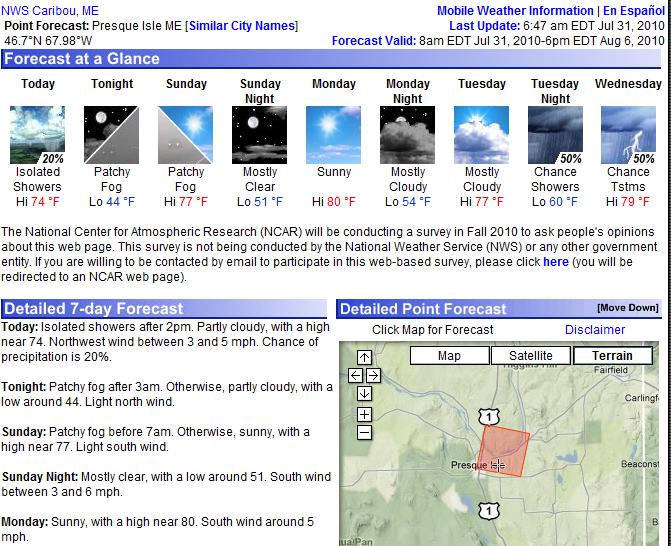 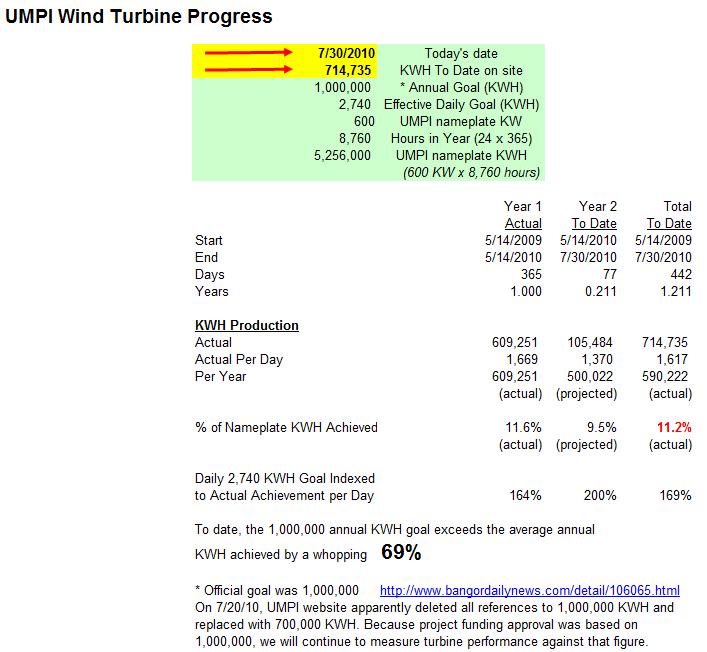 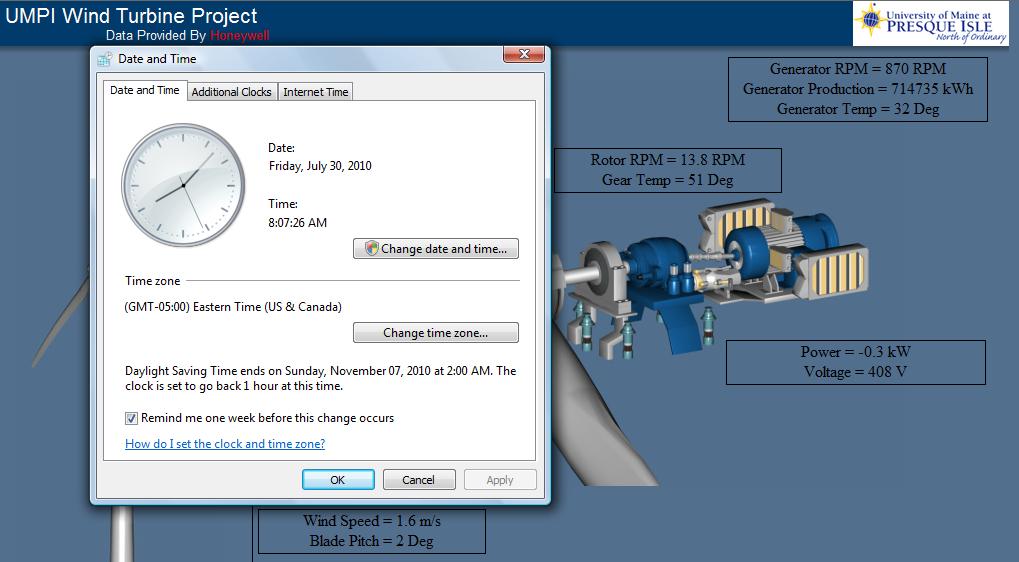 Comment by Scarlett on July 23, 2010 at 7:17am
Why not send this to a local TV station or radio? You're preachin' to the choir here! This needs to get out - not only to address issues with commercial or community wind, but also for those people who are trying to balance the issues for themselves and need help deciding if a private turbine is right for them. Maybe post this in a Bangor Daily News Letter to Editor? or as an editorial? I think that this is important information - and very timely!! Thanks for following the UMPI Turbine performance!!

Comment by Long Islander on July 21, 2010 at 4:58am
The turbine performance tracking spreadsheet has been footnoted accordingly. 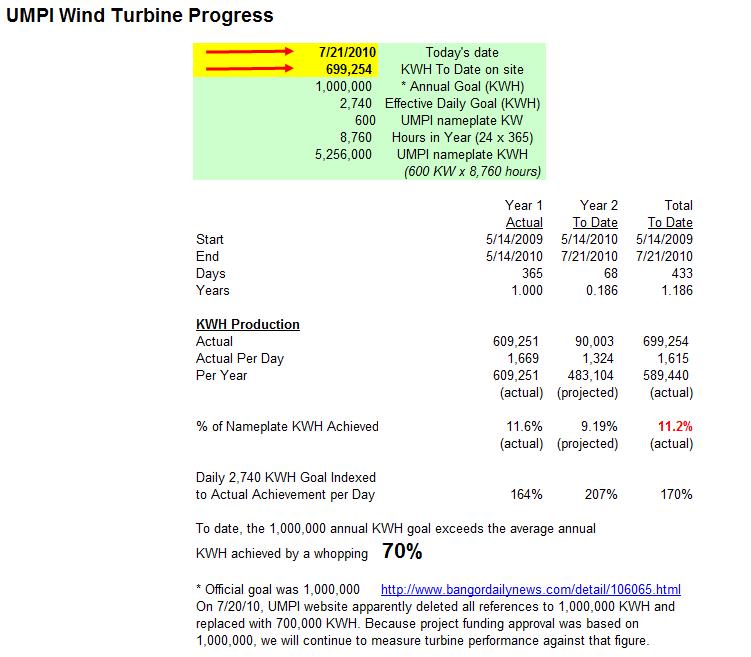 Comment by Karen Bessey Pease on July 20, 2010 at 9:54pm
Okay. This is getting ridiculous, and it's time someone took a serious look at what's going on, here. It's apparent, LI, that (with your incredible assistance and persisitence) "word" is getting out about industrial wind's poor performance. It certainly seems like pressure is being applied to make UMPI's project appear more productive than it is. ????

I'm getting steamed, and when that happens, I write. Be back soon, and we'll discuss where to send it. And thank you for staying on top of this. I'll say it again... this is getting ridiculous.

Comment by Harrison Roper on July 20, 2010 at 2:33pm
Whoever is in charge of the publicity for the windmill at UMPI is not very sophisticated about such technical details as kilowatt HOURS. For months, it was reported as "kilowatts" produced. The site still does not state what period of time the big "kilowatt hours" figure covers.
UMPI is an educational institution, and they are learning. They did due diligence about their wind resource before committing to it, but I have never seen the results of the feasibiblty study that was done for them by a firm in Andover, Masachussetts.
We should all be grateful for what we do know about UMPI's windmill. It is more than you can get from First Wind.
Harry Roper
Hou9lton/Danforth