Scotland’s National golden eagle survey - How it was rigged

Will Scotland ever wake up to the fact that most of their golden eagle population has been wiped out from wind energy developments? Will Scotland ever realize that the Royal Society for the Protection of Birds (RSPB) other groups like Raptor Prosecution, are actually two-faced fronts working on behalf of this corporate madness. This truth lies in their obvious omissions and fraudulent research.
When dealing with wind energy research, fraudulent impact research is the norm. As my many reviews of wind industry research prove, what is being called research are primarily calculated lies and lies by omission. It has been this way for several decades. The recent latest national eagle survey in Scotland is a perfect example of this investor-based fraud sweeping the world.
Wind turbines located in eagle habitat will always slaughter regional and migratory eagles. It has been known for decades that golden eagles, due to their foraging habitats, are one of the most vulnerable species to wind turbines. Wind turbines in eagle habit slaughter eagles, there are no exceptions. To suggest or expect otherwise is ridiculous at best and in the case of the UK, the unreported killing of golden eagles from wind energy has been a massive fraud.

Wind energy developers are an international group and their fake research follows them into every country. In 2015 the USGS (Interior Department Agency) released a study from the Altamont region in estimating or suggesting that there were 280 pairs of eagles living in a 2000 square mile area. But they could only verify 11 active golden eagle nest sites. Using insane research methodologies and embracing false assumptions, this fake study inflated this eagle population by over 250 pairs of eagles.

The results of the latest 2015 Scotland National eagle survey took about 2 years to be published. In this 40 page report of nonsense and dreary details, the golden eagle population was said to be 508 pairs, an all-time high. None of this is true and in reality, an accurate report on this population should have been ready a few weeks after all the surveys were finished. This report also makes this incredibly deceptive statement about an impossible situation……….. “To date, there have been no recorded Golden Eagle fatalities at Scottish wind farms although local displacement has been reported (Fielding & Haworth 2010, 2015)."

Up to 1992, Scotland’s golden eagle population was considered to be about 420-440 nesting pairs. But even this old population number, in the face of Scotland’s 6000 MW’s of wind energy and their millions of sq feet of deadly rotor sweep, could not possibly exist today.  At about 1/5 the size of CA, Scotland has now installed 5 times the density of deadly wind turbine rotor sweep per square mile as California. Most of this wind energy development in Scotland has been installed in prime golden eagle habitat.

In CA after wind energy developers invaded their habitat, over 80% of the original golden eagle population has disappeared.

Here are the survey methods chosen for the 2015 National Eagle Survey.......
“coverage was achieved by volunteer members of SRSG and RSPB staff, including eight professional surveyors. All surveyors worked under license from SNH. The importance of establishing the presence of eagles in a home range early in the season, during the display and nest building period when birds are at their most conspicuous, was emphasized to surveyors. Surveyors were urged to focus attention on extended vantage point watches of the skyline and sky above the home range to increase the probability of locating displaying birds. If birds were not seen, all nest sites used previously were checked for signs of activity.”
We are also told in this report that ......... “The Scottish Raptor Monitoring Scheme (SRMS), a partnership started in 2002 between governmental and non-governmental conservation bodies and the Scottish Raptor Study Group (SRSG), oversees a large programme of monitoring undertaken annually by dedicated amateur fieldworkers. This includes approximately 150 volunteers who monitor Golden Eagles at a large number of home ranges. Monitoring effort has increased over the last 10 years, potentially influencing the numbers of pairs located.”

Finding active eagle nests and checking the progress of a nest is not a difficult task. This is especially true for Scotland when every known nesting site has been known for decades. Scotland is also not a large country. In fact, Scotland at 78,772 km2 is less than 1/5 the size of California’s 420,000 sq km. Then when one considers that the southern half of Scotland has had virtually no eagles for over 20 years, finding all the remaining golden eagle nests in Scotland becomes that much easier.

According to this report (Scottish Natural Heritage Commissioned Report No. 626) “Only three home ranges were occupied in southern Scotland in 2011.” RSBP also agrees (see image) that most of the golden eagles remaining in Scotland, now live and breed in the northern regions of this country. An area of about 40,000 km2. 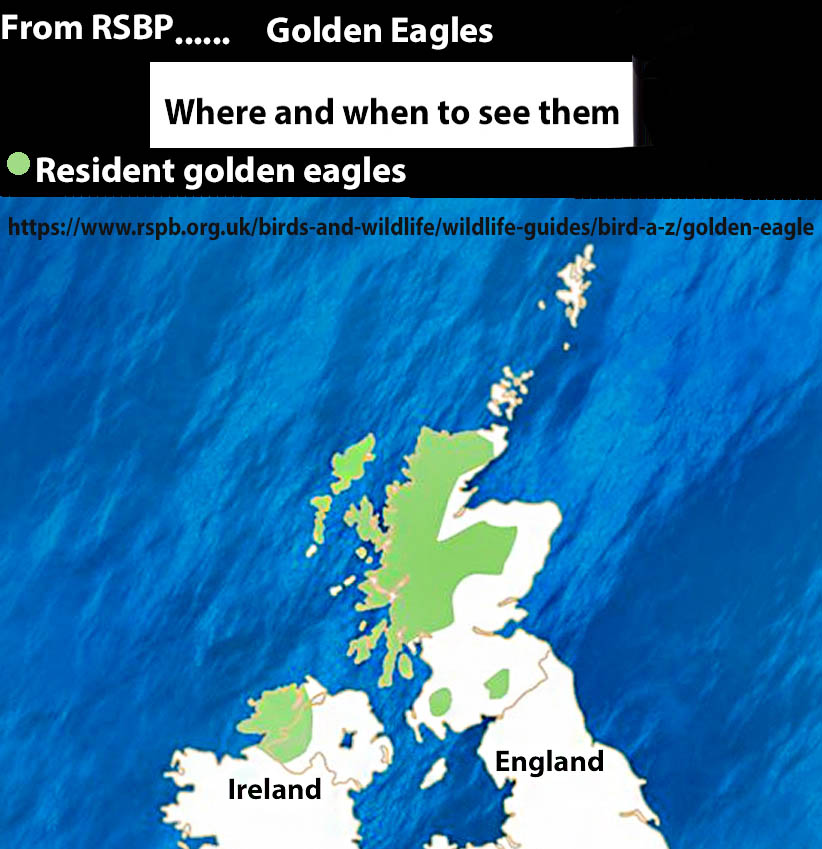 In order to understand how badly the people in the UK have been duped by the 2015 National golden eagle survey I will provide details from a past survey that was conducted in Elko County, Nevada back in 1972. Elko county, at 44,556 km2 is about the same size area that is needed to survey Scotland’s eagle population. This old survey used a small aircraft to check over very similar looking habitat as Scotland’s. Also just as in Scotland’s nesting eagles, where 96% percent of all golden eagles nest on crags, Nevada’s golden eagles also nest primarily on cliffs or crags. From an aircraft, these nests are quite easy to spot (See habitat images). The Nevada eagle survey was efficient, to the point and readers are not being distracted with page after page of deflective details. Funding for the Nevada survey was also not wasted on insiders hiding a rapidly declining eagle population.
There was also another California golden survey that was conducted in 2012. In this survey of BLM’s California Desert and Northern California Districts, in an area well over 250,000 Km2, a helicopter was used. Hundreds of historical sites were checked along with additional nesting habitat. Forty-four nests were found to be active (eggs laid) and 32 nests were successful (young produced). The results were written up on one page.

I've been reading real scientific raptor research for 50 years. I know what real scientific research is and how it applies to these eagles. Accurate eagle surveys like these 2 surveys could easily be conducted every year in Scotland. Instead, the UK with RSBP helping, have time after time, chosen to conduct a lunkhead version of pretend eagle research with an army of hand picked stooges. Sadly, this research is being created as a reason to lie about a truth that Scotland probably does not even have 150 nesting pairs of golden eagles remaining. There are certainly not anywhere close to 400 or even 500 pairs.

So when is Scotland's next eagle survey? If the people wait until 2025, this population will probably be at 25 pairs with RSBP soaking in even more taxpayers millions, from their perverted captive breeding and reintroduction programs. Please review the information provided in the images. 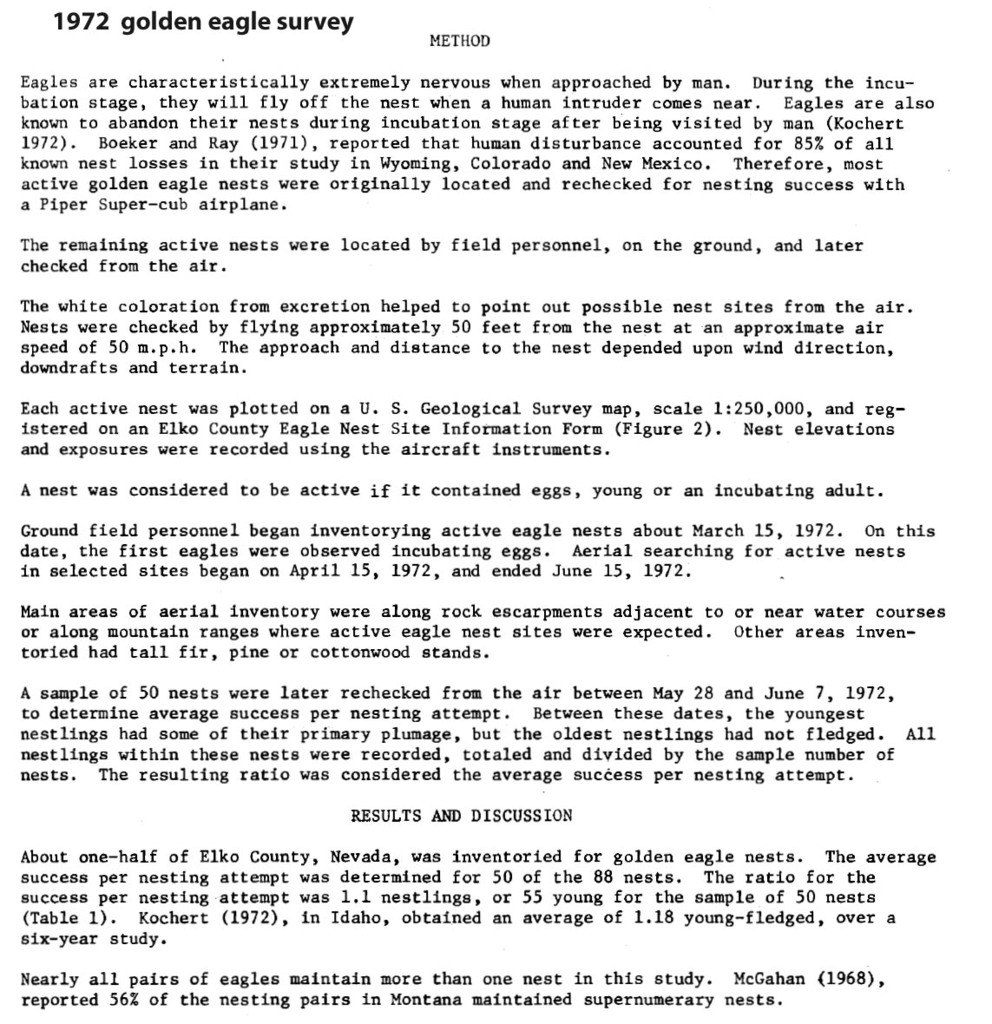 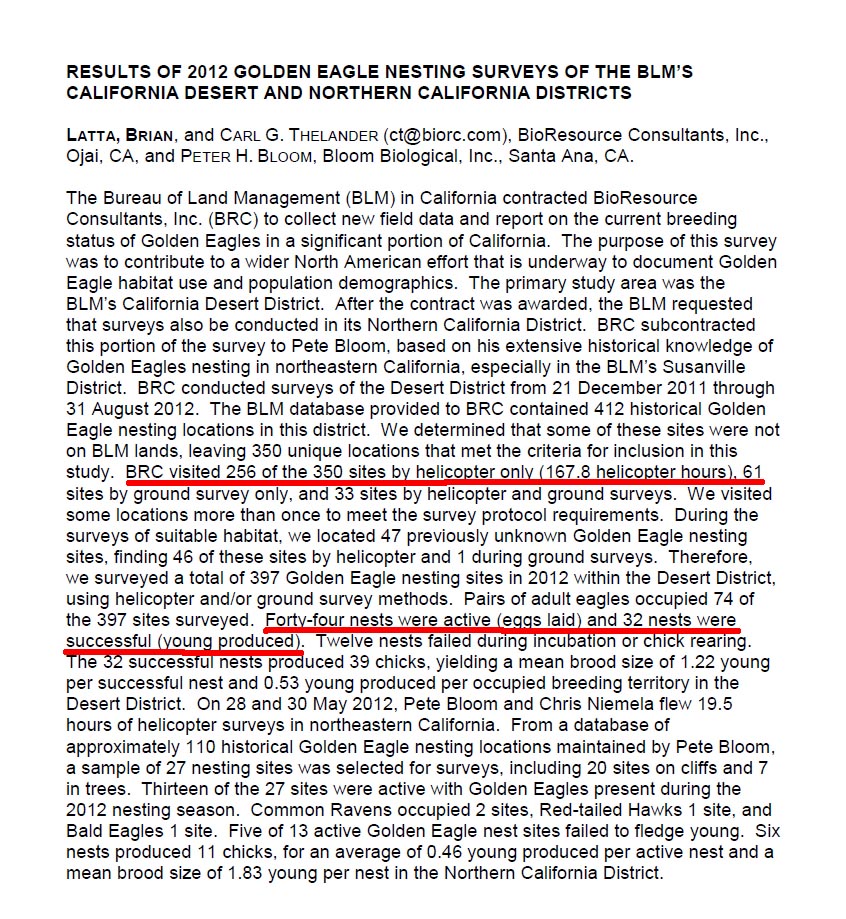