Although it cannot be stated definitively that wind energy was the deciding factor in Scott’s win over Minter, it is abundantly obvious that wind has been one of the most divisive issues in the state. During the Democratic primary for governor, two of the three candidates, Matt Dunne and Peter Galbraith, opposed wind-energy development. In fact, Galbraith made opposition to wind energy the primary focus of his campaign. In the August primary, Galbraith came in third, with about 6,500 votes. Shortly after the primary, he told me that wind-energy development “was the issue [in the Democratic primary] and I think in the general election it will be an issue as well.” It appears that nearly all of Galbraith’s supporters went on to vote for Scott, who ended up beating Minter by more than 27,000 votes. 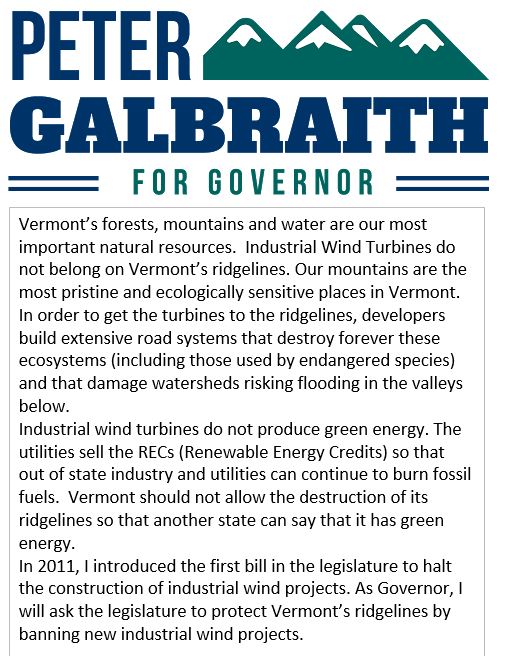 Even some of the greenest of Green Mountain State residents don’t want their mountaintops covered with wind turbines. The backlash against Big Wind is taking place from Maine to California. But few states have seen more resistance to the landscape-destroying sprawl of wind energy than Vermont. Indeed, wind energy has emerged as one of the most prominent issues in Tuesday’s Democratic gubernatorial primary in the Green Mountain State...........Opposing Minter for the nomination are former state senator Peter Galbraith and Dunne, a former state representative. Galbraith has told acquaintances that the main reason he is running for governor is to stop the wind-energy sector’s destruction of the state’s mountain and ridges. On his campaign website, Galbraith says, “Industrial Wind Turbines do not belong on Vermont’s ridgelines. Our mountains are the most pristine and ecologically sensitive places in Vermont. . . . Industrial wind turbines do not produce green energy.”........................“For years and years, it has been a given that all renewables are intrinsically good no matter where they are placed,” Whitworth said. “Now people are realizing that that just ain’t so. People are realizing that the renewable industry is made up of bullies who are interested only in profits. They aren’t concerned at all about the environment.”

One of the comments to the national review article:

I'm willing to bet that most of the people who rejected wind projects in their neighborhood, will still support massive subsidies to have those same project built in someone else's backyard.

Comment by Robert Goldman on August 11, 2016 at 12:39am
"Climate change is here" so we're going to do nothing about it by putting up wind turbines that don't work and where they harm forest and mountain ecosystems. Thanks Bill McKibben. Perhaps if all those supposed progressives in Vermont learned how to read factual information and did just a little critical thinking they would not be so willing to sacrifice the fantastic natural beauty of the Green Mountains for another corporate scam. This country is sliding down a slippery slope greased with violence against nature, greed and corruption.

It is even more moronic to accept the rigged research from these charlatans and then call these projects green.

This "backlash" is what put pro-wind Sue Minter well over the top in the primary.