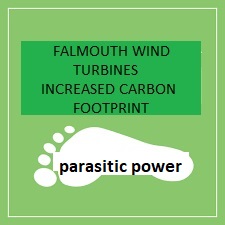 The town of Falmouth actually increased its Green Footprint from 2008 to 2020 with electricity from the grid (local power company).
The term "parasitic power consumption" by wind turbines means they must use electric power from the local power company to stay functional even if there is no wind or shut down by the courts. The town continues to maintain the turbines as they have to move them out of town.
Electric power energy audit into the Falmouth, Massachusetts wind turbine located at the wastewater treatment plant 2008 vs 2020 respectively, before and after the wind turbine installations does not exist.
Everyone knows a home energy auditor can help identify ways to save money on your electric bill but who is conducting the energy audits at the Falmouth Wastewater Treatment Plant before the wind turbine installations and after the 2015 and 2017 court shut down of the wind turbines?
Falmouth town officials for years have touted the amount of power and money the wind turbines have produced but today omit out how much power is going into the wind turbines from the local power company.
It has been said it's to difficult to determine how much electric power is going into the wind turbines because there are no electric meters between the Wastewater Treatment Plant and the turbines.
Why would over $100,000.00 a year in electric costs be ignored for all these years in all the studies?
Over ten years the additional electric use could near one million dollars.
Parasitic electric power use is like wind turbines infra-sound the owners of the turbines and manufacturers omit the bad news especially politicians who find out after the fact.
The annual revenue from the operation of both wind turbines is estimated at $975,000.00 or around one million so it's easy to figure ten percent for parasitic power usage.
Statistically, in 2013, the operation of both wind turbines generated $115.00 per hour or ($975,000 to 1,000,000.00 per year more or less).
The Wind II project still owes 3.5 million to an ARRA loan as it is no longer energy efficient.
The town still pays insurance and maintenance on the turbines. The town approved 2.5 million in November 2019 to move the old gear-driven wind turbines out of town.
Large wind turbines require a large amount of energy from the grid (local power company) to operate up to one-tenth or about 10 percent of their rated output.
The Falmouth wind turbines need up to $100,000.00 per year for batteries, lights, heat, AC, computers, alarms, etc. -This is 10 percent of the rated output of kWh a year of two 1.65 megawatt wind turbines.
Massachusetts cost per kilowatt-hour (kWh) is expensive at the third highest in the nation.
The manufacturers of large turbines or the Town of Falmouth never include electricity consumption from the local power company in the specifications they provide.
Among the wind turbine functions that use electricity are the following:
Yaw mechanism (to keep the blade assembly perpendicular to the wind; also to untwist the electrical cables in the tower when necessary) -- the nacelle (turbine housing) and blades together weigh 92 tons on a 1.65-MW turbine. blade-pitch control (to keep the rotors spinning at a regular rate).lights, controllers, communication, sensors, metering, data collection, etc. heating the blades -- this may require 10%-20% of the turbine's nominal (rated) power heating and dehumidifying the nacelle -- according to manufacturers, "power consumption for heating and dehumidification of the nacelle must be expected during periods with increased humidity, low temperatures and low wind speeds" oil heater, pump, cooler, and filtering system in the gearbox, hydraulic brake (to lock the blades in very high wind) - thyristors (to graduate the connection and disconnection between generator and grid) -- 1%-2% of the energy passing through is lost
Magnetizing the stator -- the induction generators used in most large grid-connected turbines require a "large" amount of continuous electricity from the grid to actively power the magnetic coils around the asynchronous "cage rotor" that encloses the generator shaft; at the rated wind speeds, it helps keep the rotor speed constant, and as the wind starts blowing it helps start the rotor turning (see next item); in the rated wind speeds, the stator may use power equal to 10% of the turbine's rated capacity, in slower winds possibly much more.
Wind Turbine Brake & Safety Controls, Incoming Power Sources
https://www.youtube.com/watch?v=er9op2FdMN8 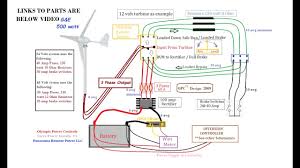 Comment by Frank Haggerty on May 13, 2020 at 9:54am
Wind Turbines Use Up To 20 Percent of Electric Power From The  Local Power Company -TRUE
"Parasitic Power Use" 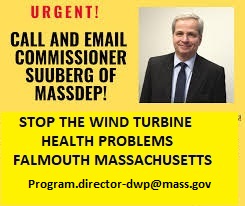