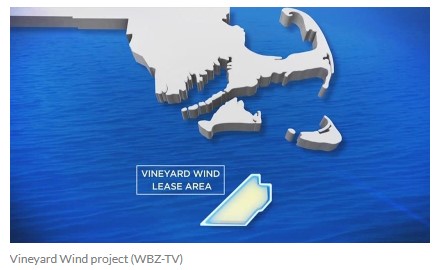 A group of “concerned citizens” say they plan to file a lawsuit on Wednesday aimed at stopping the nation’s first utility-scale offshore wind project and others slated to follow.

Nantucket Residents Against Turbines is attempting to first stop Vineyard Wind, which plans to build at least 62 wind turbines 15 miles off the coast of Martha’s Vineyard.

“The construction of these turbines is set to take place in a nexus of activity of the North Atlantic right whale, a critically endangered baleen whale with a population of fewer than 400 specimens remaining in the world,” the group said in a statement Tuesday.

The group said it’s concerned with the impacts the increased construction vessel traffic, pile driving and operational noise will have on the whales.

Andrew Doba, a spokesman for Vineyard Wind, declined to comment.

The 62 Vineyard Wind wind turbines will generate enough electricity to power approximately 400,000 homes by the time the project is completed in 2023, CEO Lars Pedersen said in May. He also said it will create about 3,600 jobs – half of them permanent, the other half construction jobs.

But some fear the project and others like it that are still in the planning stage, such as Mayflower Wind, 20 miles south of Nantucket, also could irreparably harm Massachusetts fishing and lobstering industries where the turbines will be put.

The Biden administration nevertheless issued final permits for Vineyard Wind in May as part of an aggressive offshore wind and renewable energy agenda. America is currently suffering its own humiliating Afghanistan defeat and messy withdrawal. The whole-of-government approach to failure in a 20-year, $2 trillion fraud and money-laundering scheme has resulted in an epiphany for Americans: their country is ruled by crooks, liars, and thieves.

If there was any doubt about the illegitimacy of this police state, one only need look at the FBI’s latest fabricated terror plots or the Department of Homeland Security’s alarmingly evidence-free security warnings that we, the people are the main enemy of America. Expect to see DHS warnings that Americans who are unhappy with the United States’ wholesale surrender and foreign policy incompetence are potential terrorists. America is now a clown show where everyone who doesn’t clap is labeled a terrorist.

Like with the Soviet withdrawal from Afghanistan, our defeat there has exposed the nation’s failed leadership busy looting and wrecking what is left of our country. We can now see that we are led by the worst of humanity—a collection of garbage elites, tyrants, and political grifters. Like the Soviets before us, there are two only two classes in modern America: the ruling class, and everyone else.

Vaccine mandates may herald the end of the republic
https://www.americanthinker.com/blog/2021/08/vaccine_mandates_may_h...

SUICIDE: How Vaccine Passports Will Cause the Economic Collapse of America

None Dare Call It Conspiracy

Watch the short video at the following weblink: 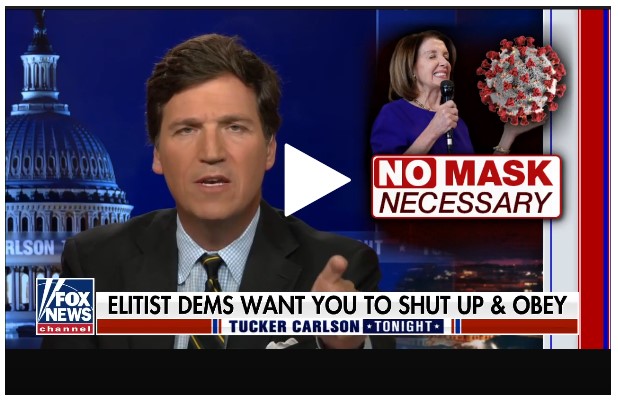 Fox News host Tucker Carlson issued a stark warning Tuesday, emphasising that “we’re seeing now what happens when countries tolerate authoritarians, even for a moment” as people worldwide are being told to submit to increasingly draconian “rules” in the wake of the pandemic.

Carlson noted “Has there ever been a clearer window into the society they’re trying to build? Our formerly middle-class nation now has a serf class. They’re the ones wearing the masks, being forced to take drugs they don’t want, being told not to communicate with one another, except through digital channels the Democratic Party controls.”

He continued, “We now have two groups of Americans, not a broad middle. The favored and the unfavored. The saved and the damned. The vaccinated and the unvaccinated. That’s how the architects of all this see the country.”

Carlson also pointed to former NSA head Michael Hayden’s assertion that Trump supporters should be sent to Afghanistan to die.

“That’s how contemptuous they feel about you,” Carlson noted, adding “Shut up and fetch another glass of Riesling.

RE folks often advocate wind and solar provide at least 50% of the load of the NE grid.

This data can be downloaded. Graphs can be prepared for each year.

The graphs show periods when the sum of wind/solar production is only about 15% of what would be the average production for that time of year. Such lull periods occur at random throughout the year and may last up to 5 to 7 days. A second, usually shorter lull, may follow a few days later

The annual average load on the NE grid from:

The turnkey capital cost would be about $500 billion, at $500/kWh for site-specific, custom-designed, utility-grade battery systems.

The systems would need to be, all or partially, replaced every 15 years. Such systems are not comparable to mass-produced battery packs for electric vehicles.

The battery systems would be empty after the 6-day lull.

If a second lull would occur a few days later, existing sources would not have been able to fill the battery in those few days, i.e., a second battery, of similar capacity, would be needed.

The US average turnkey capital cost of site-specific, custom-designed, grid-scale battery systems is at least $600/kWh, delivered as AC.

Such high $/kWh costs are likely to prevail for at least 10 more years, unless major technical breakthroughs are discovered, and subsequently implemented on a large scale. See URL

NOTE: The EIA graph, based on surveys of battery system users, shows slowly decreasing costs after 2018

The values would be near the high end of the range in New England. See graph in URL

1) This article identifies 18 losses of a battery system, including thermal management, monitoring and control, totaling about 20% for a round-trip, excluding transformer losses. See note

2) Per EIA survey, grid-scale battery efficiency is about 80%, AC to AC basis, excluding transformer losses. Aging had only a minor effect, because the battery systems were only a few years old. See note.

NOTE: Usually, AC electricity from a distribution grid has to pass through a step-down transformer, about a 1% loss, to reduce the voltage to that of the battery, then the AC is converted to DC, then inside the battery. The DC energy from the battery has to be digitized, then made into a sine wave with the same phase and 60-cycle frequency as the grid, then via a step-up transformer, about a 1% loss, to the distribution grid, for an overall efficiency of about 78%, much less with aging. See URL

NOTE: This article has detailed analyses of battery systems

Electric vehicle charging has losses of about 16% in summer, about 18% in winter, from AC wall outlet, then the AC is converted to DC, then inside the battery. There are additional losses for on-board auxiliary systems during charging.

During operation, there are losses from the battery to the wheels, and on-going losses for on-board operating auxiliary systems, such as: 1) battery and cabin cooling/heating; 2) heated seats, mirrors, windows, and 3) music, instrumentation, etc.

Good luck - big bucks on Wind's side.
I don't see why these wind farms are even an option in the specific realm of endangered species.
I have come to believe that the Right Whale issue was created by the Wind profiteers just to get fishermen out of the way. But they need to be equally as accountable.