First Wind is going to INVEST a billion in Maine? Hardly.

First Wind is going to invest a billion in themselves so that they can grab the Production Tax Credit, a lavishly generous subsidy that is the largest of all the "subsidy extenders" draining the national treasury. This will do nothing positive for Maine but will create many large negative impacts to Mainers' health, Maine's environment, Maine communities, tourism and electricity rates.

With each passing day, a larger and larger percentage of Mainers is becoming wise to this house of cards industry.

The state wants assurances that the wind power developer has the money to finish four projects in Maine worth $1 billion.

AUGUSTA – The Maine Department of Environmental Protection is asking First Wind, Maine’s largest wind power developer, to prove that it has enough money to build four major projects that are in different stages of construction and permitting.

The request follows a Maine Supreme Judicial Court ruling last month that the state’s Public Utilities Commission erred when it approved a joint venture between First Wind and Emera Inc. of Nova Scotia, the energy company that owns two utilities in northern and eastern Maine. The projects that the DEP is scrutinizing had millions of dollars in financing from Emera, money that First Wind now can’t use.

The PUC is holding meetings to decide how to comply with the court’s ruling.

The DEP’s request affects four wind-energy projects: Oakfield Wind in Aroostook County, Hancock Wind in Hancock County, Bingham Wind in Somerset County, and Bowers Wind in Penobscot and Washington counties. Taken together, the projects could cost about $1 billion to build.

Must Read: All Eyes Should be on the First Wind – PUC Affair (The Maine Wire)

Clearly, Maine's PUC has not helped build trust in Maine's state government and has done more than its fair share in garnering Maine the distinction of having the second least trusted state government in the nation. *

Whether it's the Kurt Adams affair where their Chairman jumps to First Wind to become their director of transmission after laying the groundwork for wind-required transmission at $1.4 billion ratepayer expense over PUC staff objection, or their approval of the First Wind-Emera merger in violation of Maine law over PUC staff objection or David Littell's dual life as RGGI Vice Chair (now Treasurer)  and PUC Commissioner, the Maine PUC never ceases to disappoint.

All Eyes Should be on the First Wind – PUC Affair

The Court decided.  It voided the deal because Maine law clearly says that utilities cannot own, control, or have interest in generation assets. Whether that law makes sense is a subject for another column, but its present effect is to send Maine’s biggest turbine installer into a tailspin.  Anyone concerned about the economy and the environment should be paying close attention.

With no more money from the Emera spigot, now First Wind is scampering in the Street like a drunkard desperately seeking a drink. The Boston developer, brainchild of former ENRON alumni Steve Vavrik, Paul Gaynor, and Michael Alvarez, this week announced that they have gotten consent from existing creditors to raise $75 million in junk bond financing from institutional high rollers (who might want to show a loss for the tax year).  If they can raise it, that money is a fraction of what they need to stay afloat, but it restores a pulse for a few weeks or months. 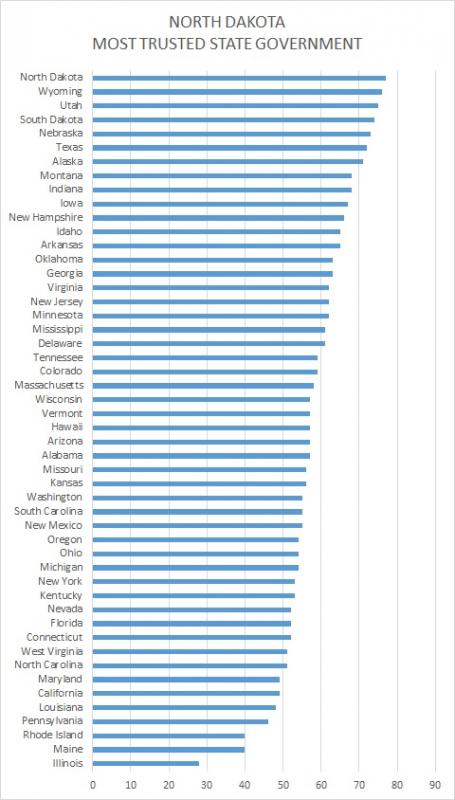 Speaking of trust, let's not forget:

The banks that First Wind has been doing business with in the past..except for one , are all in trouble. If you look at the SEC reports for First Wind under risks throughout the years...don't think Wall Street would be too interested at this time. That one lawsuit that Duke Energy(owned by Exxon) lost over wind farms is a big indicator to me. When they can't buy off the court system, it is over. It was found out in NY that Cohocton wind farm did not have access to the grid, the same as all the wind farms in ME, with the exception of Mars Hill. Their power goes to Canada. It was stated that the transmission lines would be in place by 2011. Well, that didn't happen. Just too big of a scam to pull off. If we had a fair MPUC , the rate increase for "updates" would have to be returned. Because no transmission lines are being built. Stetson wind farm was finished in 2008..Cohocton before that ..with no access to the grid. Good planning?

I am sure the scoundrels and their scurrilous lawyers can play junk the bond game. they have enough junk projects to easily piece together something their sales sharks can sell to unsuspecting investors. They should play on Wall Street and get out of Maine.

Collins and King are wind.....Poliquin is the only candidate for senate stating against wind.

Erick Bennett??? I do not think he knows anything about wind.   Bellows?  no answer yet...

My emails were forwarded to his campaign manager. He used to answer all calls with a follow up letter. So, it looks like we have to ask him in person. If he campaigns around here, I will certainly ask him . Haven't liked all his votes in the past but he does seem to try to represent his constituents who are conservative. Couldn't vote for him unless he has made a decision against wind farms and the expedited wind law.

Does candidate Michaud have an opinion on the heinous expedited wind law?

Thank you for expressing your concerns about wind farms, which I have shared with the Congressman. Rest assured, Congressman Michaud understands the concerns about the siting and regulation of wind farms, be they inland or off-shore. Although he is a strong advocate for finding alternative forms of energy that can generate job growth while making the state a cleaner place to live for generations to come, he believes that communities and the individuals living in them need to be involved in any discussions about whether to bring wind (or any other large-scale project) to the area and where to put it if/when it is approved.

In short, the Congressman believes that local communities, government, and business leaders need to be engaged in the process to see whether support exists among the people who will be most impacted by such projects in their area. That is especially true when it comes to wind power.

As for going against the Party, Congressman Michaud has never considered himself beholden to any group or political Party, and that will not change if he is elected governor.  He believes in doing the right thing regardless of party, and he also believes in working with Republicans, Democrats and independents alike to come up with the best ideas to help Maine."

So he wants to here our concerns.

Dan in the link you listed it appears First Wind had some 39 projects in the worls in 2008. Now, after perhaps hundreds of millions in government gifts, such as ARRA stimulus funds, their website seems to list only 17 projects.

First Wind would like Mainers to believe that if they don't roll over and sign up for their projects, Maine will be left behind. Meanwhile, it seems that First Wind is actually a surprisingly small outfit which is very Maine-centric as seen by the projects they list on their website.

If you look at their list of projects, you can see that Maine, at five projects (which includes Oakfield, a project where FW is involved with a pending lawsuit) has more FW projects than any other state.

http://www.firstwind.com/projects
If you then compare their project penetration by state to population by state, you can see that their penetration per capita is highest in Maine by far, 8.7 times the average in their six state operating universe.
So, yeah - they like to create an image of Maine going to be left behind if citizens question these projects of this wonderful large company. But in fact, they are heavily skewed to Maine and frankly, incredibly dependent on Maine. Yet everyone from legislators to towns providing TIF's treat them as if it's the other way around.

Their Maine-centricity is consistent with the fact that Kurt Adams and Angus King III hold powerful positions with them.
Could it be that they only have 50 employees as seen below? 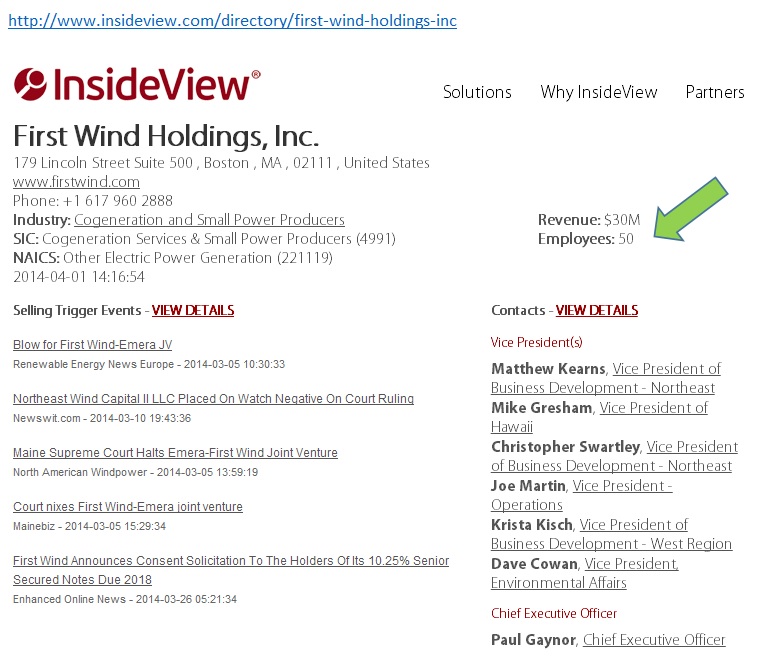