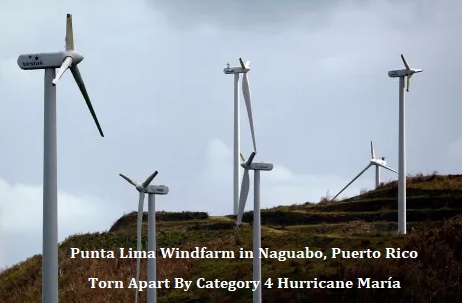 Can an ocean wind turbine survive a major hurricane?  History shows probably not.

Federal, state, and local regulations govern many aspects of land-based wind energy development but no government agency is regulating the certification or structural integrity of ocean wind turbines for catastrophic hurricane damage.
In January of 2019, BOEM, Bureau of Ocean Management decided to establish a Gulf of Maine Task Force, which is composed of federal officials and elected Tribal, state, and local officials from Maine, New Hampshire, and Massachusetts.
Offshore wind development is planned for the East Coast from Maine to North Carolina.
The question is what happens to an ocean wind turbine when the combination of high winds and waves twists in the weather? What happens to the blades and foundations?
Hurricanes have already caused catastrophic damage to land-based wind turbines.
Hurricane María a Category 4 hurricane made landfall in Puerto Rico on September 20, 2017. The wind farm in Punta Lima had almost every turbine damaged and many completely destroyed.
Hurricane Bob was one of the costliest hurricanes in New England history. On August 18, 1991, the center of Bob passed 35 miles off the coast of North Carolina at 140 miles per hour about the same as Hurricane Maria. Monday, August 19 Hurricane Bob came through Cape Cod, with sustained winds averaging 96 to 100 miles per hour and gusts reaching as high as 125 mph. What would have happened to a wind farm off the coast today?
In September of 2019 Hurricane Dorian, Category 5 hit the Bahamas with sustained wind speeds of 185 miles with wind gusts of over 220 miles per hour. What would happen today if a storm of this magnitude came up the coast into proposed wind farms?
The US Energy Department is developing tools to help wind system designers lower the risk for offshore wind turbine systems located in extreme weather areas. What is the tool or backup plan if 3000 megawatts of wind power gets knocked out in one hurricane?
Hurricanes and the wind turbine damage they can cause from past experiences are easy to predict.
A New England hurricane not uncommon is a tropical cyclone originating in the Atlantic Ocean that affects the states of Connecticut, Rhode Island, Massachusetts, Vermont, New Hampshire, and Maine in the United States.
The United States set a goal of deploying 30 gigawatts of offshore wind power by 2030, enough to provide electricity to 10 million homes without strict government structural integrity regulations.
The United States Congress needs to set the wind turbine certification and/or structural integrity standards for hurricanes.

Hurricane risk is real for offshore wind
My regular readers know that I have been fussing about the threat of hurricanes destroying proposed Atlantic coast offshore wind arrays. The issue arises because the offshore wind industry is based in Europe, which does not get hurricanes. My focus has been Dominion’s massive project off Virginia, but the whole East Coast is hurricane alley.

Now I have found some research that actually quantifies the threat and it is very real. It looks like wind generators will have to be redesigned specifically to withstand hurricanes. In fact that work is underway. In the meantime we should not be building conventional offshore wind towers.
Weblink for the full article:
https://www.cfact.org/2022/06/24/hurricane-risk-is-real-for-offshor...

All Eyes on SCOTUS: Supreme Court to Issue Climate Endangerment Finding Ruling – To Decide if EPA has authority to regulate CO2 or Congress
https://www.climatedepot.com/2022/06/29/all-eyes-on-scotus-supreme-...