The Trump administration cast the fate of the nation’s first major offshore wind farm into doubt by extending an environmental review for the $2.8 billion Vineyard Wind project off Massachusetts.

The Interior Department has ordered an additional study of the farm, proposed by Avangrid Inc. and Copenhagen Infrastructure Partners, Interior Secretary David Bernhardt said in an interview with Bloomberg News Friday. The project, which has drawn opposition from fishermen and coastal communities, had been scheduled to be operational by early 2022. The developers have warned that regulatory delays could put it in jeopardy.

Last month, the federal Bureau of Ocean Energy Management notified project officials that the government was “not yet prepared” to issue a final environmental impact statement, which had been that month.

It’s the latest blow in what’s been a difficult stretch for the offshore wind farm company, which hopes to erect 84 wind turbines about 15 miles south of Martha’s Vineyard. The Edgartown conservation commission denied permission for an undersea cable to pass by Chappaquiddick, a decision that’s under appeal with the state Department of Environmental Protection.

In a decision that could derail Vineyard Wind, federal regulators on Friday put their review of the project on hold temporarily while they seek to better understand the cumulative impact of the many wind farm projects being proposed along the eastern seaboard.

A spokeswoman for the Bureau of Ocean Energy Management issued a statement saying the agency is expanding its draft environmental impact statement on the Vineyard Wind project to include a cumulative analysis of wind farm projects on the drawing board.

“Because BOEM has determined that a greater build out of offshore wind capacity is reasonably foreseeable than was analyzed in the initial draft EIS, BOEM has decided to supplement the draft EIS and solicit comments on its revised cumulative impacts analysis,” the agency said. The statement said the decision was prompted by comments from stakeholders and cooperating agencies requesting “a more robust cumulative analysis.”

Vineyard Wind Races Against the Clock

Beyond the immediate concerns with permitting, Vineyard Wind faces a tangle of logistical challenges and potential investor turmoil if the project continues to see delays. Anthony Logan, an industry expert with the renewables research firm Wood Mackenzie Power, has spent the past six years forecasting the wind energy field. He said that while Vineyard Wind, barring major disaster, remains poised to become the first industrial-scale offshore wind-farm in the U.S., the financial success of the project is dependent on qualifying for a federal tax incentive for wind energy projects, known as the investment tax credit (ITC).

In order to take advantage of substantial investment tax incentives and navigate difficult supply-chain logistics, Vineyard Wind had planned to start construction on the project by the start of the new year.

A good thing arrogant MA RE folks have run into the FEDERAL BUZZ SAW.

There must be panic all around. Trump does not like the whirly birds. Call the media; Blame Trump.

Massachusetts tried to build first and then do an environmental impact study.

The Hutzpah is beyond the pale.

Hold inane public meetings, let people vent, make it APPEAR you are open to inputs and listening to concerns, but go ahead and build anyway.

As far as arrogant Dartmouth is concerned, the turkey is in the oven and it will be baked. 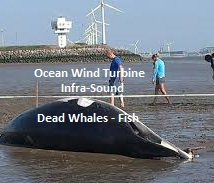