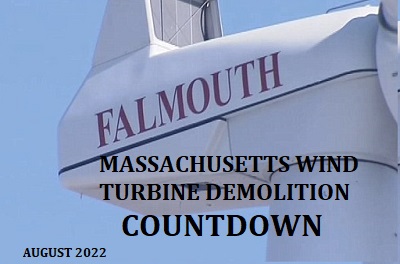 Since the  green-energy wind turbines went up in 2010 and 2012 the town of Falmouth has received massive complaints of health effects, noise complaints, and even diminished property values from its residents
The infrasound is described as a pulse that gets into your organs, or chest cavity, and mimics a heartbeat, giving you headaches. Neighbors describe it as extremely disturbing and it gets to the point where you have to leave.
The town installed the turbines with no permits and was warned prior to installation that each turbine generates 110 decibels of noise equal to a hard rock band playing 24/7.
Massachusetts Superior Court in 2017 ruled the turbines a nuisance and they have been shut since.
Atlantic Coast Dismantling won the bid to demolish both the turbines and will meet with the town of Falmouth Tuesday, August 2, 2022, to discuss cutting the power to the turbines the next week. The town issued an electric permit to Dagle Electric on June 29, 2022. Following the completion of the electricity, they will drain all the lubricants from the turbine. Reliable sources say the third week of August looks like the demolition week.
Falmouth, Massachusetts is the site of the worst-sited commercial wind turbines in the United States.
The Wall Street Journal published a scathing editorial on the experience of Falmouth, Massachusetts, which spent $10 million on wind turbines, and it’s been a disaster. The article was printed on February 4, 2019, titled: "A Green New Deal in Profile."

Update on "fluid" in turbines:

1. It's about 200 gallons of caustic hydraulic fluid the same type they put in automobile transmissions.

2. They always say they are going to investigate wind turbine fires but never tell the public. The gearbox bearings wear out in only a few years and overheat causing the 200 gallons of fluid to ignite.