This example shows storage would need to be very large, in order for wind and solar to supply 100% of electrical requirements, which is only 23% of total primary energy requirements.

Since startup in June 2015, Gorona del Viento, GdV, the owner of the EU-subsidized, wind/pumped-storage project, has supplied only 40.9% of El Hierro’s electricity, or 9.4% of total primary energy; the original goal was 100% of electrical energy.

The shortfall is made up by the pre-existing diesel plant

In 2017, winds were strong enough to generation 68% of El Hierro’s electricity, but a third of it had to be curtailed (wasted by feathering the wind turbine rotor blades), thereby reducing the usable wind generation to 46.3%, because of inadequate hydro plant storage capacity

Hydro plant storage would have to be increased by a factor of at least FORTY, and wind system capacity by at least 50%, for GdV to supply 100% of El Hierro’s electricity, equivalent to 100/46.3 x 10.6 = 23% of total primary energy requirements

NOTE: Much greater wind, solar and storage capacities, and grid expansion/augmentation would be required, if El Hierro had heat pumps and electric vehicles.

The Future of Renewable Energy and Materials

Having 100% renewable electricity, based on wind, solar, pumped-hydro storage, and/or battery storage and grid expansion/augmentation is technologically, relatively easy, but the resulting electricity would cost at least 3 times as much as the electricity of the existing electricity supply system

However, the major question remains, not just in El Hierro, but all over the world,

2) What materials would be used to make millions of products, including wind turbine systems and solar systems, cars, clothes, appliances, etc., currently embodying fossil-based materials, such as plastics, fiberglass, etc.

The top image shows surplus and deficit wind generation in 2017

Winds were strong from mid-March to beginning-October; storage increased during the period

All surpluses of wind generation, in excess of demand, were added to storage, or wasted, if storage were already full

All deficits of wind generation required withdrawals from storage, or help from the diesel plant, if storage were too low.

The net effect is the storage balance diagram (bottom image)

According to the Storage Balance Diagram, 7,900 MWh of storage capacity (excludes losses of about 20%) would be required for 100% of El Hierro’s electricity, during 2017, which is almost forty times the ~200 MWh design capacity of the reservoir.

However, the reservoir cannot be filled to capacity, because of potential failure of the supporting rock structure. As a result, the operating capacity is only 40/70 x 200 = 114.3 MWh, which was sufficient for only 46.3% of El Hierro’s electricity, which was only 10.6% of total primary energy in 2017 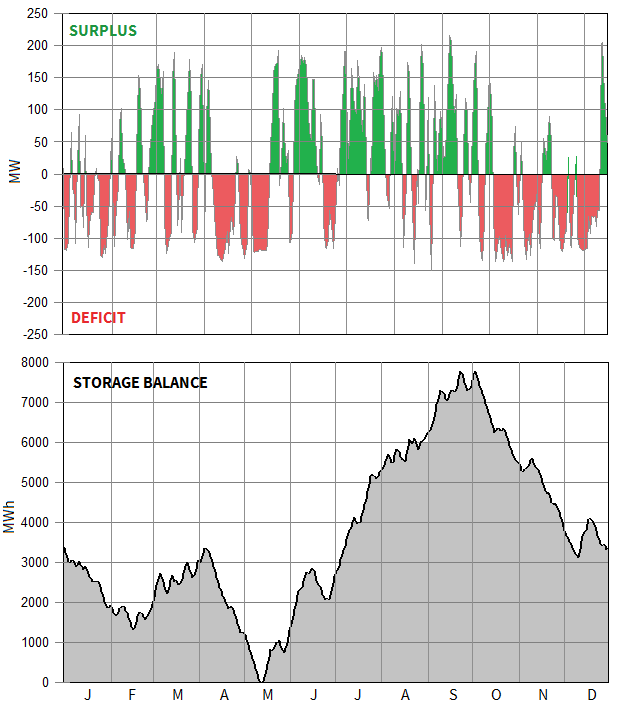 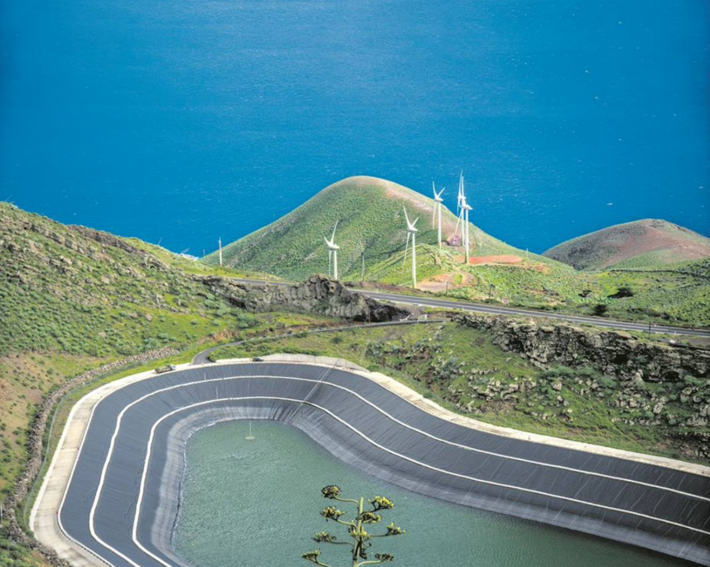 The above analysis assumes pumped-storage hydro plants would be the only measure to deal with the vagaries of wind and solar. The analysis showed a very large upper reservoir would be required.

In reality, there are multiple measures that would significantly reduce upper reservoir capacity requirements, such as:

1) Overbuilding wind and solar to partially reduce red areas, especially during low wind and solar outputs. Having extra wind and solar systems would be costly, but helpful, because they would generate some electricity, even under adverse conditions

3) Increasing the capacity of connections to nearby grids, to enable imports and exports, to partially reduce green and red areas; this measure is not available for island grids.

5) Flatten the daily electricity demand profile by shifting the usage of electricity to different time periods, for example, by remotely turning on/off the pre-selected electrical systems of participating electricity users, as needed,

All five measures have been practiced by Germany, Denmark, the UK, Ireland, Spain, etc., which have high levels of wind and solar.

Germany, Denmark and the UK can have their high levels of wind and solar, because they have major connections to grids with large capacities of hydro plants, such as in Norway, Sweden, and France

Ireland can have its high level of wind, because it has major connections to the grids of the UK and France

Spain can have its high level of wind and solar, because it has a large capacity of hydro plants, and major connections to the grids of France and Italy

The well-organized commercial and industrial sectors are spared most of the cost burden of Wind and solar to protect international competitiveness.

HIGH COSTS OF WIND, SOLAR, AND BATTERY SYSTEMS IN US NORTHEAST