Appalachian Mountain Club not our friends

After listening to today's testimony at the EUT public hearing from the AMC Maine chapter's Kaitlin Bernard, who opposed LD 1810, it is abundantly clear that the AMC is not our friend.

Comment by Art Brigades on March 17, 2018 at 9:41am
AMC participated in the Baldacci Task Force long before most people even knew about the task force. They laid down then and they’ve continued toward AMC lie down through numerous attempts to repeal or reform the law. They’ve laid down on opposing projects. They didn’t even oppose Bingham, which runs alongside the AT for a day’s walk, because they’d signed off before First Wind ever submitted an application. Was AMC one of the Northern Pass NIMBYs?

that is so disheartening

PORTLAND, Maine — Wind power developer SunEdison announced it agreed to give $2.75 million to conservation efforts and limit where it pursues wind farms to advance the state’s largest wind project to date in Bingham.

SunEdison said Friday the conservation fund is one part of an agreement between it and the group Friends of Maine Mountains, which in March withdrew an appeal of the Bingham project before the Board of Environmental Protection.

The company and nonprofit said they did not announce the agreement at the time in order to line up the specific conservation projects to benefit from the funds, which were selected by Friends of Maine Mountains, according to its policy director, Chris O’Neil.

The company said it would contribute the $2.5 million to various conservation projects and pursue wind projects only in parts of Aroostook, Somerset, Penobscot, Washington and Hancock counties. None of the funds will go to Friends of Maine Mountains.

The funding will be disbursed through 2017, the company said, with the first $1.5 million disbursed to six groups: The Trust for Public Land, the Appalachian Mountain Club, the Maine Appalachian Trail Land Trust, the Forest Society of Maine, the Atlantic Salmon Federation and the Mahoosuc Land Trust.

“These funds are being made at a critical time when important conservation work is underway,” said Wolfe Tone, The Trust for Public Land’s Maine state director. “They will help advance efforts not only to conserve key forestland and habitat, but also improve access and the opportunities for everyone to experience remarkable Maine landscapes.”

The deal also includes a 15-mile development buffer zone around the Appalachian Trail, $250,000 to go to Bat Conservation International to study how to deter bats from flying into turbines, and a 50 percent increase in the size of the fund set aside for decommissioning the Bingham project.

That issue was a major objection Friends of Maine Mountains had in its appeal to the BEP. Staff of the BEP in late February had recommended approval of the Bingham project, despite Friends of Maine Mountains’ complaints. O’Neil wrote in March that the group had “dim prospects” for overturning a permit issued by the Department of Environmental Protection through appeals to the BEP or court system.

The 185-megawatt Bingham project includes 56 turbines located on property in Bingham, Abbot, Parkman, Mayfield Township and Kingsbury Plantation. It has reached agreements to make annual payments of $106,900 to Bingham, $20,000 to Moscow, Abbot and Parkman, and $176,000 to Kingsbury Plantation for 20 years.

Katahdin is of course the northern terminus of the Appalachian trail. The photo below clearly shows total disrespect for this "greatest mountain" by the wind developers and therefore, by all the so called environmental groups who shill for wind. 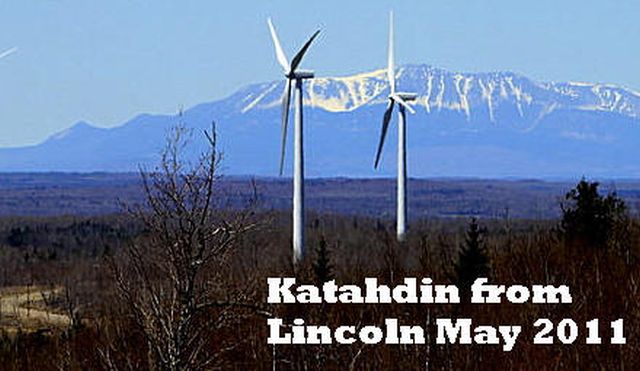 Katahdin from Rollins Wind Project (photo by Brad Blake) - and the wind companies' test towers have since moved far closer to this greatest mountain,e.g. MEDWAY.

AMC has been paid millions to shut up!

In every proceeding, those giving testimony should be required to disclose all conflicts of interest and if they have ever signed any wind industry related nondisclosure agreements.