“I’m kind of bitter about it,” Carlson said, blaming the Sun Journal for undermining the project, probably deliberately. “......................He called the news story published online Wednesday evening “a total violation of my privacy.”

Carlson told the town that “a nightly show from the garage,” which is behind the Grange hall and beside the Whitman Memorial Library, “would be a great place for local people to gather.”

He apparently planned to move quickly if the town agrees to the deal.

NOTE: I looked briefly to see if I could locate the above referenced "news story published online Wednesday evening" but couldn't find it. Looking at the URL above which includes the words "tucker-carlson-wants-to-put-a-fox-news-studio-in-bryant-pond", it would seem that the article from Wednesday night may have simply mutated into the article now at the link, thus explaining the seemingly vanished original article.

Tucker Carlson: ‘We Will Never Bow To The Mob’

Tucker Carlson: "This is what an authoritarian society looks like" 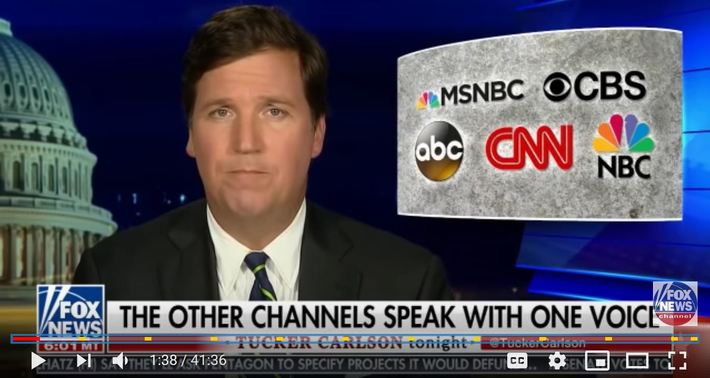 Maine Center for Public Interest Reporting: Maine’s newspaper industry is now unlike any other in the country

Like Lenny Bruce, the Fox News host is the target of an organized effort at suppression I host a comedy-driven radio show for guys. Until Sunday, no one confused it with something that should be taken seriously. Given my on-air name, “Bubba the Love Sponge,” I assume most people get the joke. We are rude, sometimes profane.

Tucker Carlson called into my satellite radio show regularly from 2006-11, and like all my guests, he adopted an edgy comic persona for the broadcast. He said really naughty things to make my audience laugh, and they did. The 100 or so shows we made with Mr. Carlson weren’t a secret.

Do I really need to go into the rich history of insult comedy? Lisa Lampanelli, Andrew Dice Clay, Rodney Dangerfield, even Triumph, the Insult Comic Dog. Comedy breaks taboo subjects that release the unspoken into the air in ways that are, dare I say, funny.

To be sure, we say really mean things on my radio show, and we laugh instead of getting mad. Why do we allow things to be said in comedy that wouldn’t be acceptable elsewhere? Believe it or not, scientists have studied comedy for an answer, and they found one. It’s called benign violation. We laugh when social norms are exceeded—the violation. But it’s not permanently harmful—it’s benign. No one called into my show authentically outraged about what Mr. Carlson said—not once—because everyone knew we were goofing in the spirit of the show.

To understand the mood of today, the only name you need to know is Lenny Bruce. A brilliant and shocking comic, Bruce was arrested over and over for obscenity—jailed for saying the wrong words. In New York he was convicted and died before his appeal could be heard.

Mr. Carlson is being smeared by a new generation of speech police for a new crime—refusing to give in to a small group of political activists who love all forms of “diversity” except of political thought. They take his comic words of a decade ago, reframe them as hateful, and require adherence to their demands. They attack the advertisers that simply want a chance to sell things to his audience, and threaten them with reputational destruction by public shaming unless they repudiate him. In the marketplace of ideas, these guys are shoplifters.

This is not only unfair but makes the world a sadder and angrier place. It’s a violation. There is nothing benign about falsely calling a good man a misogynist or a racist to force your politics on the half of the American public that rejects them.

If Mr. Carlson’s detractors think the way to counter his wit is to close him down by blacklisting him, I am afraid they’ll be disappointed. The chest-beating of the thought police will only help him grow. Americans love the underdog, and we love the unfairly maligned. Most of all, we love to be entertained. The people who hate Tucker Carlson are elevating him.

Did you hear the one about the political activists who decided to win on the strength of their own ideas, rather than smearing those they opposed? Me neither—and that’s no joke.

Tucker, when you're here you know you're HOME!   Please build the studio.

The left is terrified by contradictory opinion because their ideology doesn't stand up to logic or questioning, just like their failed radio talk shows, which can't exist if the hosts allow callers to dispute their positions.Their only answer is burning cities, smashed storefronts, the demand for dismantling law-enforcement, making what's illegal, legal, (drugs, aliens, etc.) and expanding the vote to include felons.The aim is to destroy America and "transform" it into Venzeula, so we can all dine out of the back of garbage trucks, thus ensuring "social justice," poverty and misery for all.The only exceptions will be for the cadre that rules over us: People like "4 house Bernie," the spokesman for "Socialism in America."