In the years of research leading up to the Criterion wind project Developers tried their best to keep a lid on reported turbine mortality. They did this by rigging research methodologies and getting the Interior Department to play along.  But as I have discovered, occasionally a crack in the dam appears giving the public a glimpse of the wind energy genocide taking place across America. The research conducted at Criterion wind project is of those cracks. 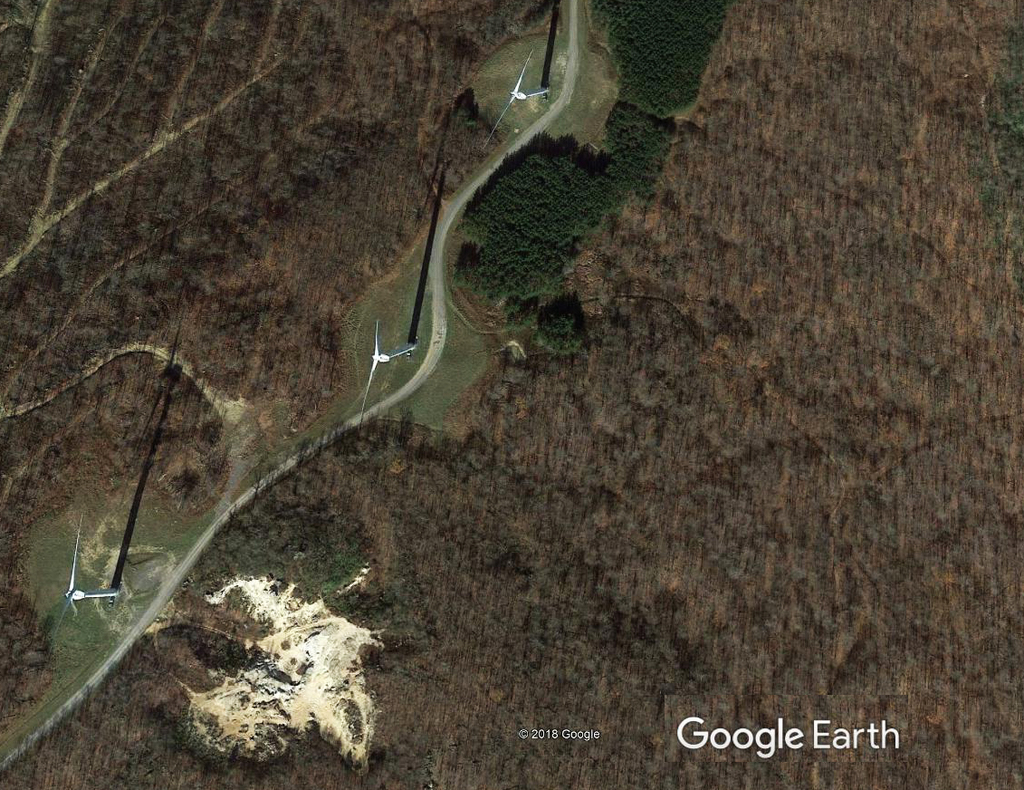 The Criterion wind project is interesting because it was designed with mortality research methodologies set up so that carcasses searches would be daily.  This is almost unheard of with the wind industry’s mortality research. The reason is that  daily searches find many times more carcasses and the industry does not have much time to hide carcasses before the formal searches begin. I suspect developers thought they had their bases covered with the grossly undersized search areas.  The tiny search areas chosen for this wind farm were at least 25 times too small for massive 420 ft tall turbines spinning with 47-meter blades.

But as researchers would soon find out, those tiny search areas, that did not even cover full areas out to 40 meters from turbines, would still produce hundreds of carcasses that would have to be explained away.

“The monitoring study period was about 7 months, from April 5 to November 15, 2011. Search plots were established around all 28 turbines in the project and the carcass search schedule was for daily searches at all turbines (weather and safety permitting). Search plots were generally up to 40 m (~130 ft) radius totaling roughly 80 m2 (~860 ft2). The shape of the search plots was variable due primarily to the size of the area cleared for construction.”

The project used the 2.5 MW Liberty Wind Turbine and at that time was the largest wind turbine manufactured in the United States. The turbine was developed through a partnership with U.S. Department of Energy and its National Renewable Energy Laboratory for Clipper Windpower. They refer to this arrangement as a partnership, I would call it collusion.

After reading through the facts, I believe most will agree that the research at this site was rigged and likely so at the highest levels to hide mortality.  But even with the most diehard skeptics, when seeing the basic facts, it should be very obvious that thousands of carcasses went unreported.

It is my opinion, when all the flawed research factors are taken into consideration, the fatalities hidden in this research could have been 20,000 fatalities.  This study estimated 1540 fatalities.

The research reported a total of 968 carcasses, but if you study the percentages of area searched, the areas where the most carcasses could be found were primarily avoided. This is the area beyond the turbines blade lengths.  For this study just 52 birds and bats were reported beyond 47 meters.  Based upon past studies in CA, this is an area where 85-90% of all carcasses should have been found.

Of the areas out 47 meters, searches only looked at about 75% of this total area. Adjusting mortality for this lack of search coverage brings the 7-month Criterion carcasses total up to 1221.  But this is just the beginning of the carnage that took place.

Look below at this incomplete turbine carcass distribution data from CA. Smaller turbines having a rotor diameter 18 meters shorter and an overall height up to 76 feet less, launched most carcasses well past the length of the blades. In this study 73% of bats and 78% of birds were found beyond the blade lengths of 38 meters.  Had proper search areas been used for the turbine in this CA wind farm, far more carcasses would have been located and the percentage of carcasses found beyond 38 meters would have likely been 90%. 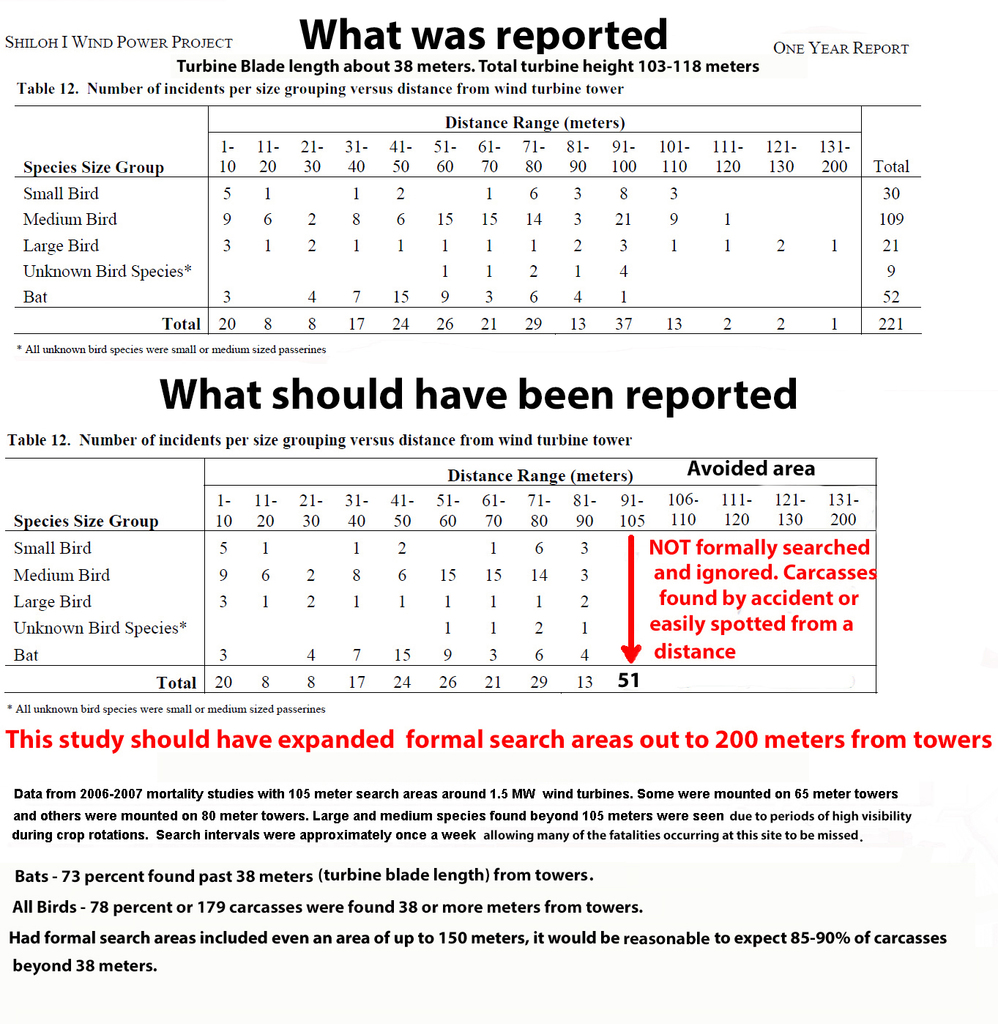 Wind turbines launch bodies upon impact with great force. The hundreds of carcasses collected around another wind farm in CA, Altamont also show similar dispersal patterns from towers. At Altamont turbines under 100 ft tall and with 9-meter blades, launched about 50% of carcasses twice the length of turbine blades. (Study image below) 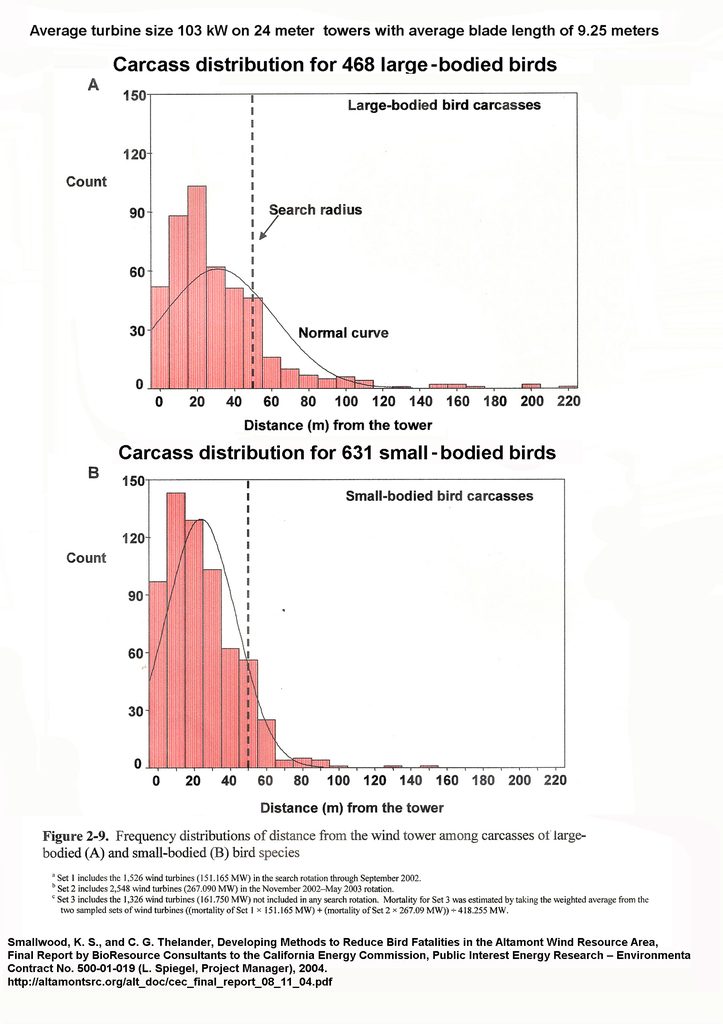 With the 7-month total Criterion total now adjusted to 1221 and representing about 10% of the carcasses, it is easy to see how thousands of other turbine fatalities, were actually missed.   Were 10,000 fatalities missed in this bogus study or is a more accurate number 20,000?  At this point it doesn't really matter as long as readers understand that this green energy study was contrived garbage.

But there is more..........In the mortality report for the Criterion wind turbines it was claimed that searchers systematically searched along predetermined in transects in their search plots. These search plots were limited to limited small clear areas around towers and some roadways.

I was told about completely different carcass searchers, from an eyewitness with access to the property I have a written statement and interviewed this person over the phone.  He said he witnessed on two occasions workers randomly picking up carcasses from the cleared areas around these turbines, that were at the time also having formal mortality surveys. On both occasions two people were seen quickly picking up carcasses from the clear areas (roads and graveled areas) around the turbines.

These areas being picked over were also the designated search areas for the study.

He also reported that these two people did not appear to be professional and barely spoke English.

He also said he would be willing to testify to what he saw. This activity as told to me was likely an organized pre-scan for carcasses ahead of formal searches.

This observed activity was nothing close to being scientific. These turbines are also located in the known habitat of the endangered Indiana bat. I contacted the Interior Department about this but was ignored.

Based upon the carcass totals actually declared in the mortality report and after compensating for the tiny search areas that missed carcasses. It is safe to assume or estimate that thousands of birds and bats went unreported in just a 7 month period around 28 turbines.