Sun Journal - The Economics of Wind: What's behind the interest, and what's it mean for jobs

You can find it at

http://www.sunjournal.com/node/825717
Some observations I made while reading it:
Truly massive…
Continue

Please see the following article where you will read how the Mahoosuc Land Trust did just that.…


ABOUT THE AUTHOR
Karen Bessey Pease is a…

How about protecting all of Maine's mountains and ridges AMC?

The impacts of wind-energy developments are not limited solely to aesthetic considerations such as undeveloped scenic vistas. These developments often include high-grade access roads in fragile, high-elevation terrain, outbuildings, and transmission lines. They adversely affect soils (e.g., increase erosion or compaction), vegetation (e.g., facilitate the spread of invasive…

Barry Hobbins: We Know What's Good For You

Don't worry about the fact that ocean wind will be many times more expensive on your electric bills. Don't worry at all. It is for our own good according to Ocean Energy Task Force member and Utilities Committee Co-Chair Barry…

I use the term "drive by" because there is no online forum to fire back with a comment. The author uses the term "anti-wind activists", but wasn't he the activist who created the problem on Vinalhaven in the first place?

The article is here:…

Ocean Energy Task Force; "Not in My Front Yard" is Preventable 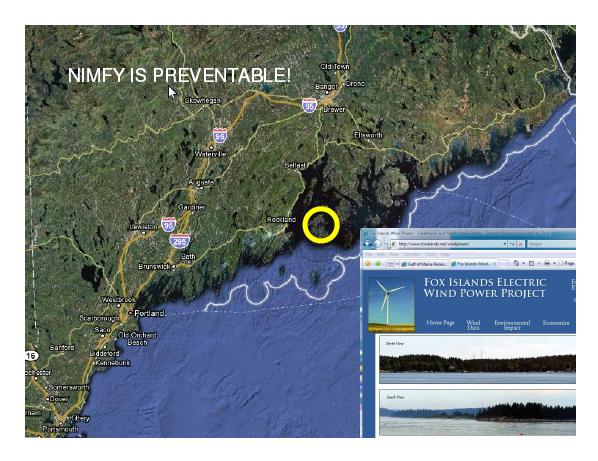 I came across an OETF presentation and was struck by the following slide that says "NIMFY IS PREVENTABLE". I believe the presentation is from early 2009.

NIMFY of course is the saltwater coastal version of its inland acronymn cousin, NIMBY. I'm sure the folks in places…

I'm not sure about this, but it sounds as though the town council in Fort Kent may not be looking out for its citizens who wanted an alternative wind ordinance on the ballot. The name of the citizens group is: Citizens for Responsible Wind Development, or CROWD

Rushing to the defense of the town council is Town Manger, Don Guimond.

Carolyn Chute - Does this sound familiar?

If we are one thing, we are a diverse group - a federation of busy lives moving in every direction, but intersecting at a locus that repels those who would wish to take something away from us.

The following is from an article in the NY Times about author Carolyn Chute and her husband Michael. If someone knows Ms. Chute, please send out a call for help. The pen can beat back the turbine and help chase the interloping thieves off the land.…

Congressman Eric Massa Went Up Against Some Very Powerful People

With all the news on Congressman Eric Massa's resignation, I started googling and came across the letter below.

Massa has said on the news in the last 24 hours that some powerful forces in Washington, D.C. set him up and pushed him out.

From our vantage point, we know that he was a true thorn in the side of First Wind. First Wind is essentially half owned by hedge fund D.E. Shaw which paid National Economic Director Larry Summers $5.2 million…

“[Movie] sound engineers deliberately include loud noises well below the lowest frequencies that can be detected by our hearing system (20 Hertz) because, although we cannot hear such sounds directly, our body actually feels them. Studios apparently insist that theaters playing big-bang films be equipped with Dolby-type sub-woofers that can generate frequencies well below 20 Hz.…

Why the Double Standard Olympia, Susan and Habib?

This is a very important piece and is also posted in the NewsShare section of this website:

Which is it Maine - Do you want higher or lower cost electricity? - It's one or the other.

Here is information about…

This long awaited section is brand new to the UMPI website (2/24/10) http://www.umpi.edu/wind

Although the $ 2 million turbine was commissioned nine months ago (see May 15, 2009 Bangor Daily News

http://www.bangordailynews.com/detail/106065.html), unfortunately there are no data…
Continue

Who is First Wind?

In the piece, Mr. King names four "myths" and proceeds to debunk them. What is truly scary is that he presumably has people who could have helped him with this, yet his debunking is frankly an…

from health impact of wind turbines