Cianbro Development Corp. has told state regulators that a $26 million Pittsfield solar project and the offshore wind farm it is developing with the University of Maine “are at serious financial risk” because of charges Central Maine Power Co. proposed to connect the projects to the grid.…

Vaclav Smil: What I see when I see a wind turbine [Numbers Don't Lie]

Wind Turbines are the Most Visible Symbols of the quest for renewable electricity generation. And yet, although they exploit the wind, which is as free and as green as energy can be, the machines themselves are pure embodiments of fossil fuels.• Large trucks bring steel and other raw materials to the site, earth-moving equipment beats a path to otherwise inaccessible high ground, large cranes erect the structures, and all these machines burn diesel fuel. So do the freight trains and… 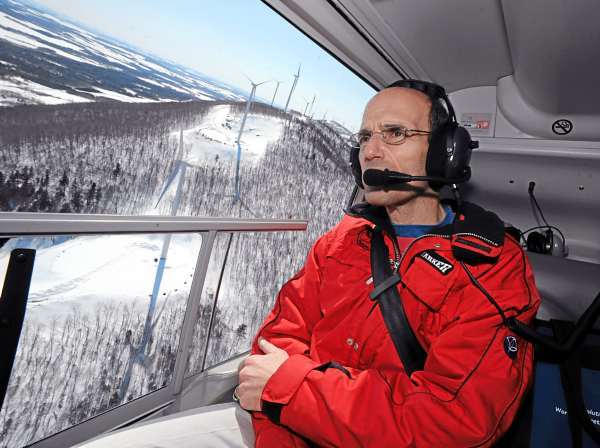 Governor Baldacci's darling company subsumed by a house of cards that has now collapsed.

Let's see how the Maine wind cartel, including all their handmaidens in the "environmental" groups spin this disaster. Meanwhile, the 500'+ tall turbines are all over our landscape and the process of decay is now formally underway. Thank…

The bill would boost renewables such as solar and wind power, as well as hydropower, geothermal energy and even...........Sen. Maria Cantwell of Washington state, the senior Democrat on the energy panel, called energy “the lifeblood of our economy” and said the Senate bill would push the nation toward “cleaner, more efficient, more cost-effective and renewable energy sources.”......The conservative Heritage Foundation denounced the bill as a “continuation of government meddling in the energy…

In the shadow of Katahdin - MOLUNKUS: Large landowner gives up on challenging wind “opt-out” petition

One of Maine’s largest private land owners has cited the “uncertainty” of wind power development in Maine as one of the primary reasons it has withdrawn its request to challenge Molunkus Township’s petition to remove itselffrom the state’s “expedited permitting area.”

“Folks feel really strongly about these location.  They often grew up going to these beaches and now take their children.” “If you build turbines that are close to shore and you lose those loyal customers, you have to find the new ones." Attracting an entirely new customer base to replace current renters could be a lengthy and difficult process.…

The word "need" in the title is bogus. What it really should say is government mandates. Just as the wind industry has "gotten to" key legislators in Maine to put in the fix, they have done the same with key legislators in southern New England with regard to mandating ratepayers buy wind.

O'Neil counters: "Utilities are thrilled to build new transmission and get their guaranteed 12% return on equity. When you add it all up, building wind is essentially an…

BDN - SunEdison to file for bankruptcy as early as Sunday, source says

Such a move would represent a fall from grace for the former darling of Wall Street and the renewable energy sector, whose rapid, debt-fueled expansion with solar and wind energy plants around the world proved unsustainable.

In January 2015, SunEdison acquired First Wind, which built multiple projects in Maine. In December, the company sold its Oakfield and Bingham wind projects in order to have cash on hand.

With the most developed wind energy supply chain in Canada and the northeastern United States, Quebec's wind industry is in a good position to meet our continent's energy challenges," said Jean-Francois Nolet, vice president of the Canadian Wind Energy Association.…

The PUC voted Tuesday to include a review of Emera Maine’s management of its transmission and distribution system in the audit.

The group also claims that citizens and town leaders have endorsed dozens of bills at the Statehouse to improve renewable energy siting, but that those efforts were blocked by elected representatives and state agencies captured by green corporate interests.........According to the Swanton-based group, cozy connections between government officials and renewable-energy companies have resulted in regulatory capture, a form of corruption that occurs when state regulators advance the…

BDN - What a SunEdison bankruptcy would mean for Maine

The fate is less clear for other projects in its pipeline, such as the massive 600-megawatt King Pine project proposed for land in the Unorganized Territory northwest of Houlton on the border of Aroostook and Penobscot counties.

The mill and others in New England have struggled to procure reliable electricity at affordable prices to the point that it has been a factor in temporary layoffs and shutdowns.

"According to the A.G., these disclosure requirements deter improper relationships between wind development companies and local government officials, such as improperly sought land-use agreements with citizens and public officials, and improper benefits being given to public officials to influence their official actions relating to wind farm development."..........

The New NY Code of Conduct:

“There was a lot of support for wind energy, but no one was willing to pay more to see wind turbines from the beach by their vacation rental property. And if turbines are built close to shore, most people said they would choose a different vacation location where they wouldn’t have to see turbines."…

A nonprofit that opposes such projects in the Moosehead Lake region fears what might happen if developer Sun Edison files for bankruptcy.

The governor said energy costs were driving the unnamed company out.

“Again, it’s about energy costs for that company,” he said. “The biggest single issue is they’re competing against Chinese nuclear power, and they’re in Maine with the No. 12 energy costs in America.”…

TerraForm Power owns four of the company’s Maine projects that it acquired through the purchase of Massachusetts wind developer First Wind. Those include the Mars Hill, Stetson, Bull Hill and Rollins Wind projects. Its Oakfield and Bingham projects were sold to the J.P. Morgan-backed Terra Nova Renewable Partners in December..................

It’s not clear just how a bankruptcy filing by SunEdison would affect proposed projects, including large wind farms…

Study: Wind Farm Would Reduce Vacation Home Rentals by More Than Half

This news, of course, comes as no surprise to Mainers who have seen real estate sales and rentals decimated by industrial wind projects - despite all the rigged government and wind industry studies that claim no adverse effects on property values.

“Over 50 percent of those surveyed indicated that they would not return to the same beach for their next rental should a utility-scale wind farm be placed offshore,” the report…

First Wind, forced wind, failed wind.........Decommisioning funds are wholly inadequate. When the subsidies run out, wind developers will walk away from their taxpayer money harvesting contraptions leaving a befouled Maine landscape. And the legislature is not doing anything about it. In fact, a predecessor legislature and a wind insider Gov Baldacci caused this scourge. The wind company "executives" will move onto their next fast buck somewhere and the so called Maine environmental groups…