Energy from the pilot project would be…

Another voice is heard from - read Phillip Conkling's op-ed in today's on line BDN about the environment and off shore wind. The misinformation never stops coming.

Esty ultimately awarded contracts to a 250 megawatt wind farm in Maine and a 20 megawatt solar center in Lisbon. Esty said he picked those because, among other reasons, the combined cost of the electricity from those installations was less an eight cents per kilowatt hour, a expense lowered by the size of the wind farm.

Residents worry about noise and visual impacts, as well as effects on lobstering.

By By Alanna Durkin December 27, 2013
...decline in tourism because of obstructed ocean vistas and noise generated by the towers. They wonder if the island will lose jobs because the turbines would take up space in precious fishing…
Continue

The government just predicted when electric cars will JUST START to become popular: 26 years away

The government just predicted when electric cars will become popular

The Energy Information Administration (EIA) just released its 2014 Annual Energy Outlook, which predicts electric vehicles will only just start to become mainstream in 2040.…

Additional background on Beaver Ridge and Patriot Renewables can be read at:

Richard Silkman’s attorney also argues that if the federal case proceeds, it…

I know it's the holidays, but go to the McLaughlin Group site - go to the bottom of the Homepage and use the "make a comment" feature to thank them for talking about bird/bat mortality as one of the biggest lies of 2013 - encourage them to up the ante on big wind - tell them our story - you never know. Tell them about Angus Kings' wind interest and his son's involvement w/FW - they may say more about it in upcoming broadcasts. Thanks and Happy Holidays!! 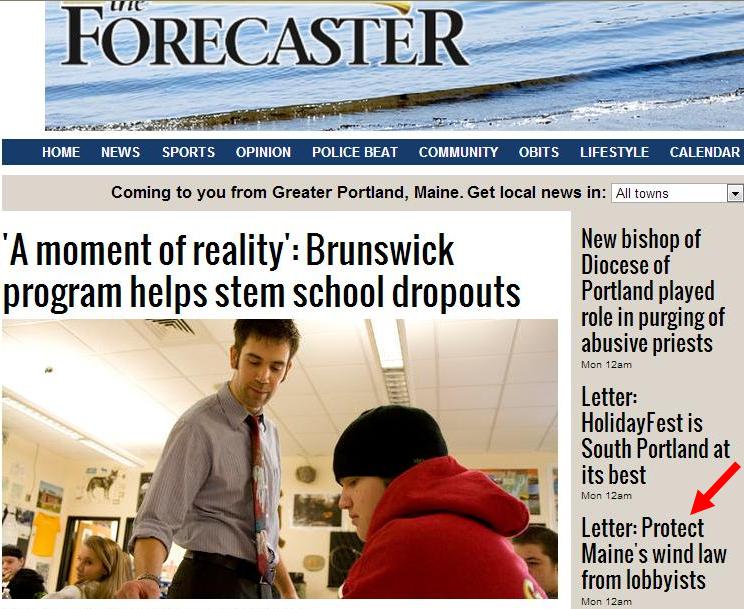 This letter appears in the online version of the Forecaster and hopefully the physical editions as well. The Forecaster, for anyone not familiar, is a free distribution widely read and very well done weekly newspaper available in several geographic areas. Its focus on hyper-local news helps assure strong reader engagement with the…

EVERYONE - Email our congressional delegation NOW! Tell them all  - Do not vote for extension of the production tax credits - Tell them if they do you will actively campaign against them next election.  And tell Mike Michaud you will not vote for him as Governor.  We have to hold these people accountable!

I wrote this and posted it in response to a letter to the editor from a known wind power shill:

I was at the Maine Audubon meeting where this sham study was presented and I have read it.  It is so poorly researched that it never should have been published.  Other than saying, in order to appease the AMC, that elevations above 2700 feet are not good sites for wind power development, the reports essentially sacrifices the entire rest of the the great state of Maine's  "expedited wind…

Ron Huber has graciously made recordings of the 12/18/13 EUT meeting and posted them in a directory at the following link:

Others will be added.

I just received and have not listened to, so I'm not sure if any of these duplicate what Ron had posted the other day - I don't believe they do:

The following ad appeared  on page 4 of the 12/17/13 Bangor Daily News, juxtaposed with a continuation of the lead cover story on propane. The type on the ad itself is very readable, unlike what can be seen here.

A clearer copy, showing the editorial content on the page as well can be accessed here:…

In the following "oldie but a baddie" letter to the Press-Herald, a Gardiner Parker of Woolwich beats up on 80 year old Marjorie Mitchell whose camp on the Lincoln Lakes has been destroyed by First Wind's project built by Reed & Reed. This is a home that Ms. Mitchell and her husband built with their own two hands many years before. Tourism is our leading industry, but Gardiner Parker sees no reason not to engage in a bit of hate mongering aimed at this…

Is there some in CTOW who can respond to the NELA letter to set the record straight. We're up to our ears in press work here at FMM and would appreciate someone taking that on. We can't let this stuff go unchallenged. Allowing the public to think/believe that windmills in ME reduces pollution from the Midwest is extremely is a complete falsehood and needs to be called out. Selling REC to Midwest polluters is what's coming from ME wind developers - Thanks. RM

We are insulted, but not surprised, that this Committee has chosen to hear only from the established industrial wind industry, personified by Juliet Brown and Stacey Fitts.

Brown is the attorney for…

December 16, 2013   Portland, Maine. Friends of Maine's Mountains (FMM) is encouraging the people of Maine to question the motivation and validity of the recent poll promoting industrial wind power in Maine. The Maine Renewable Energy Association…