When criminals, corrupt government agencies and sociopaths are in charge of wind industry research-Part 2

Besides the hidden wind energy slaughter to tens of thousands of eagles taking place, there is another great lie being told by wind industry research and it may be the biggest of all this industry’s lies. It is the hidden slaughter taking place to nocturnal migrants.

Yesterday I posted some proof of this hidden turbine slaughter that has been taking place. Today I will post even more proof. As you read through this post, I want everyone to think about a number of fraudulent nocturnal radar studies that have been conducted on behalf of the wind industry recently. Studies that are supposed to determine numbers of birds that move during the night at proposed wind farm locations. One of these fake radar studies was conducted by Audubon in a critical bird migration area off the coast of Maine. In their study flocks of birds that can number in the thousands was referred to a single target.

It has been well documented from hundreds of studies that birds migrating at night die from flying into towers and buildings. Many websites, sellout conservation groups and wind industry research is quick to point out how many birds this way each year. But the truth in this fraud is that all these liars are avoiding the fact that since 1985 there have only been two scientific studies that documented wind turbine mortality to nocturnal migrants. In their sick minds they think that just because there has been a complete blackout and avoidance of research, that it is not taking place. 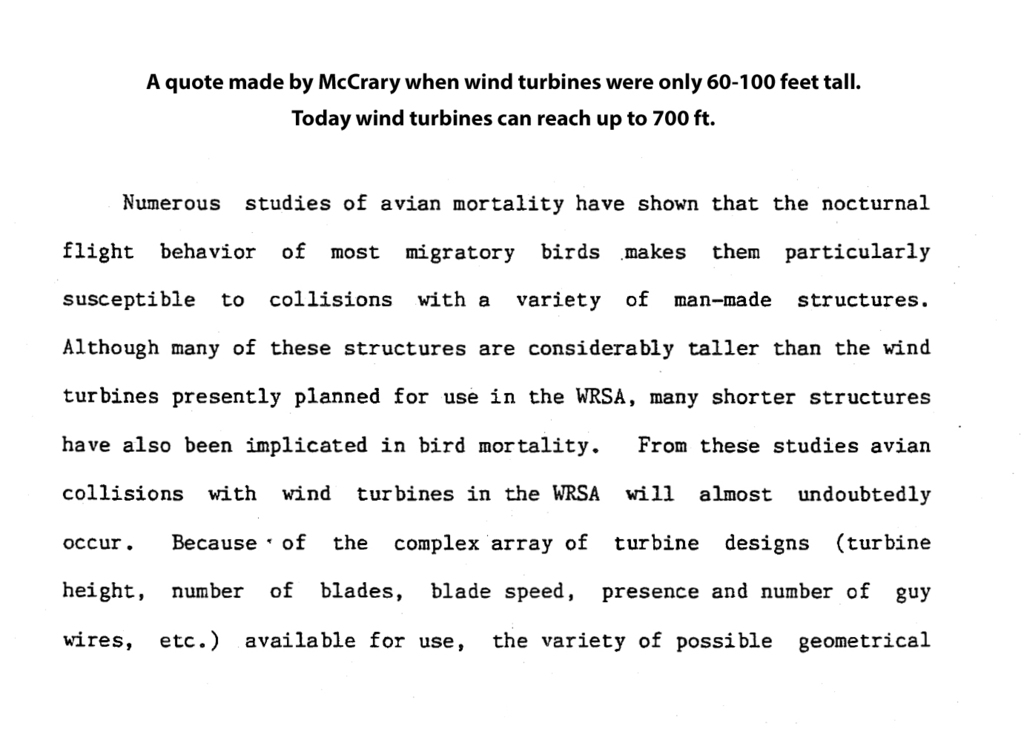 The wind industry has known for decades how vulnerable and deadly wind energy developments are to nocturnal migrations of birds. In America the first and only truly credible scientific mortality study I have come across, took place in 1985. It conducted in Southern CA and was published in 1986. This study estimated a mortality rate of 6800 fatalities annually from about 150-200 MW of wind energy at San Gorgonio Pass. This study estimated a mortality rate of 34-45 birds per MW and the majority of these fatalities were determined to be nocturnal migrants. 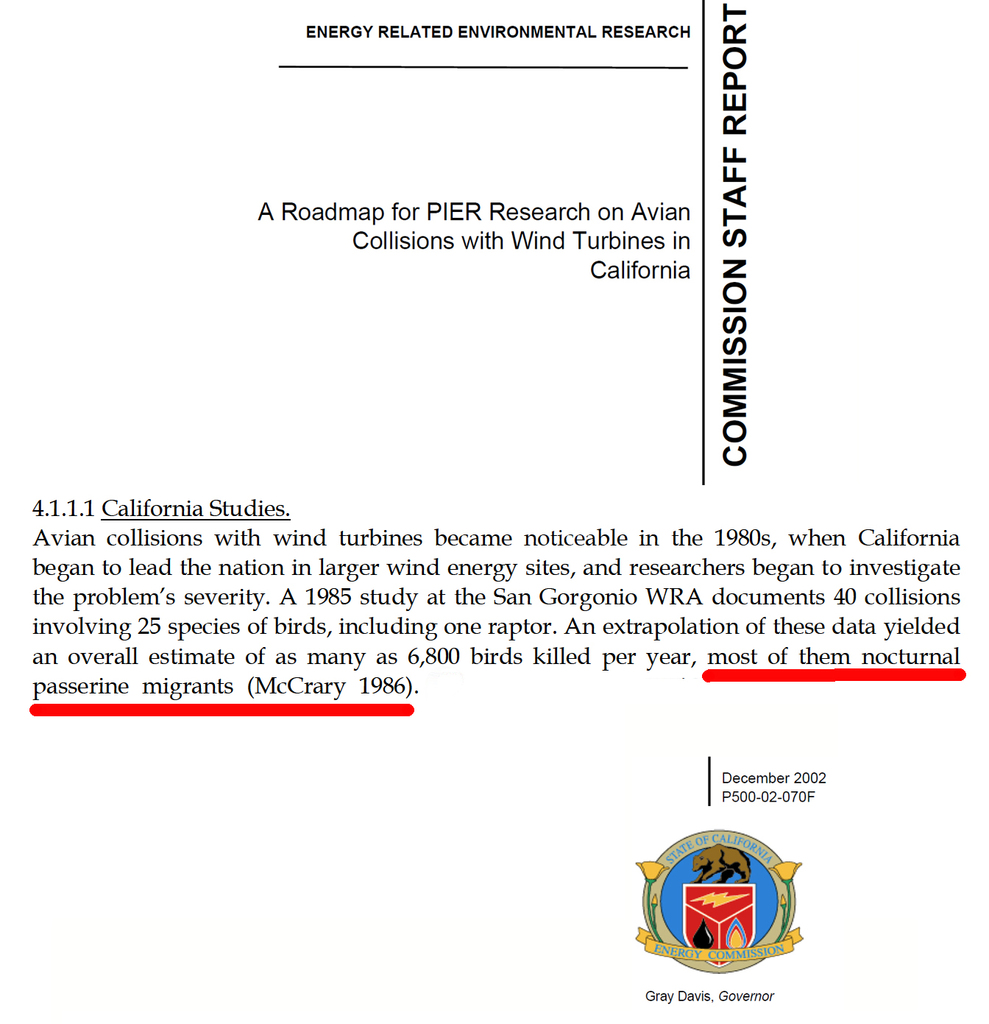 Since this study was conducted in 1985, there has never been another such study conducted in North America. This study has also been stripped from the internet and hidden for years.

This lack of green energy research on wind turbine mortality to migrating birds is no accident, it is deliberate.

Even a 2009 report from New Zealand took notice of the lack of turbine mortality research that has been conducted on nocturnal migrant birds……………… “There appears to have been only one comprehensive study calculating the collision risk for nocturnal migrant birds (Winkelman 1992a). This was performed in The Netherlands, and collision risk was calculated by means of observed collisions(using thermal image intensifiers)”. 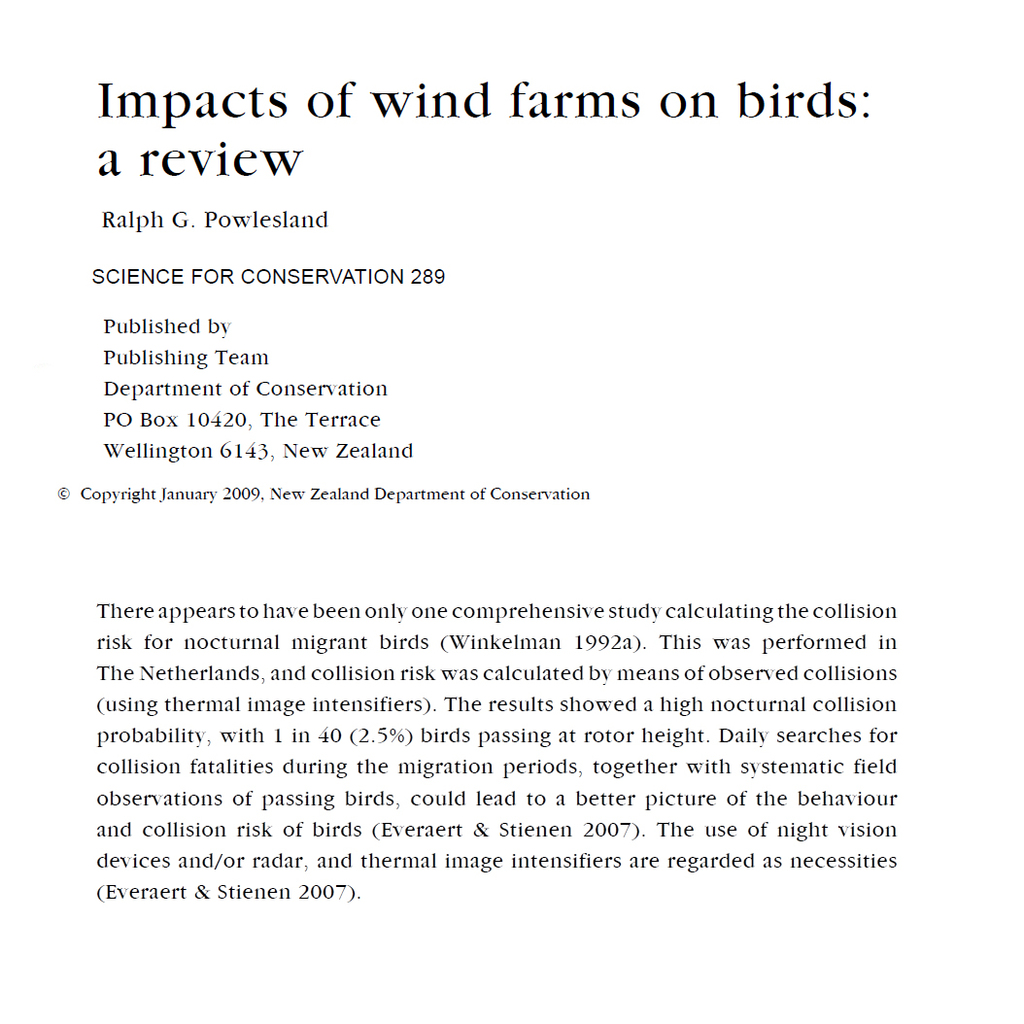 The authors of this report were not aware of the other hidden study conducted years earlier in CA. Of course the reason for this lack of research is obvious, these hidden mortality numbers are staggering when compared to the wind industry’s reported fraudulent mortality rate of about 2.5 bird per MW.

In a 520 page 1998-2003 report, “Developing methods to Reduce Bird Mortality in the Altamant Pass Wind resource Area”, one would think researchers would discuss nocturnal bird migration and how dangerous these conditions are to birds. But this report said nothing and why would they when search intervals around turbines were 30-90 days apart this contrived study. Researchers have no way to document a nocturnal migration slaughter nor could they ever document a mass fatality event.

In the next big study at Altamont, “ ALTAMONT PASS WIND RESOURCE AREA BIRD FATALITY STUDY, BIRD YEARS 2005–2010”, once again in 171 pages nothing is said about Altamont’s slaughter that occurs from the nocturnal migration of birds. This I find amazing since there were results from another hidden study that suggested this nocturnal migration mortality was occurring at Altamont.

In a study conducted at Altamont during the bird migration periods of September/October 2007 and March/April 2008 , researchers found over 5 times the numbers of small bird fatalities. The numbers would have been much higher but search areas were restricted to tiny areas only 40 meters from towers and searches were not conducted every day. Even in this hidden study conducted during bird migrations, once again nothing was said about migrating birds being at high risk or being killed during their nocturnal movements across ridge-lines. 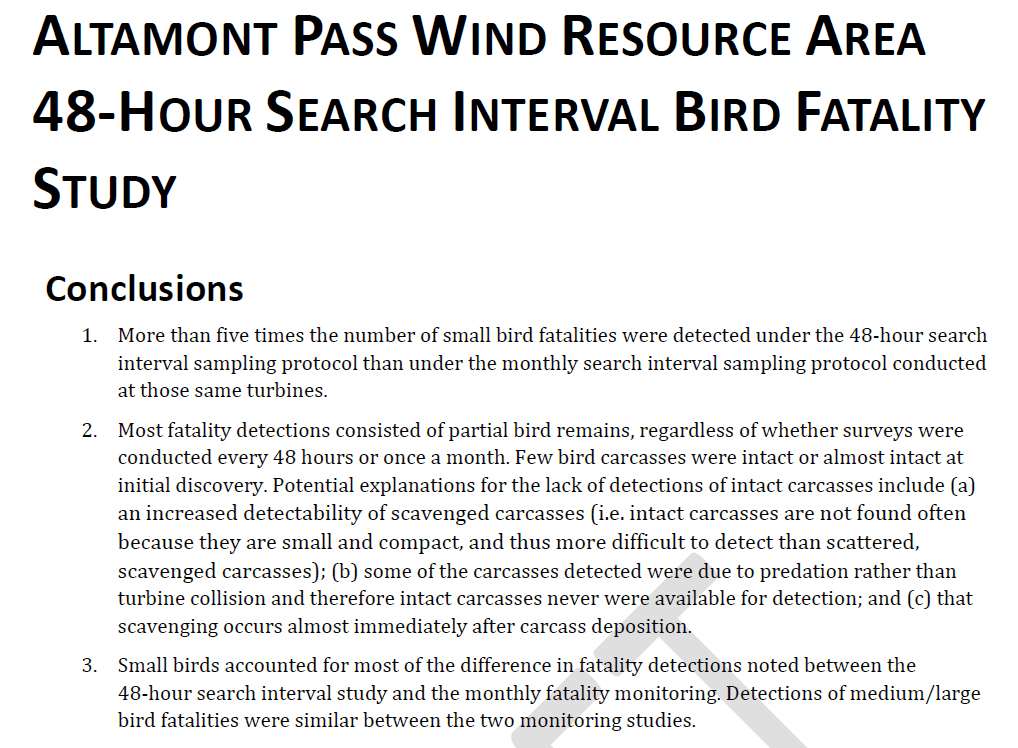 After I found this 2007/2008 study, it was obvious to me that bogus Altamont mortality research was using 30-90 day search intervals to hide tens of thousands of fatalities. 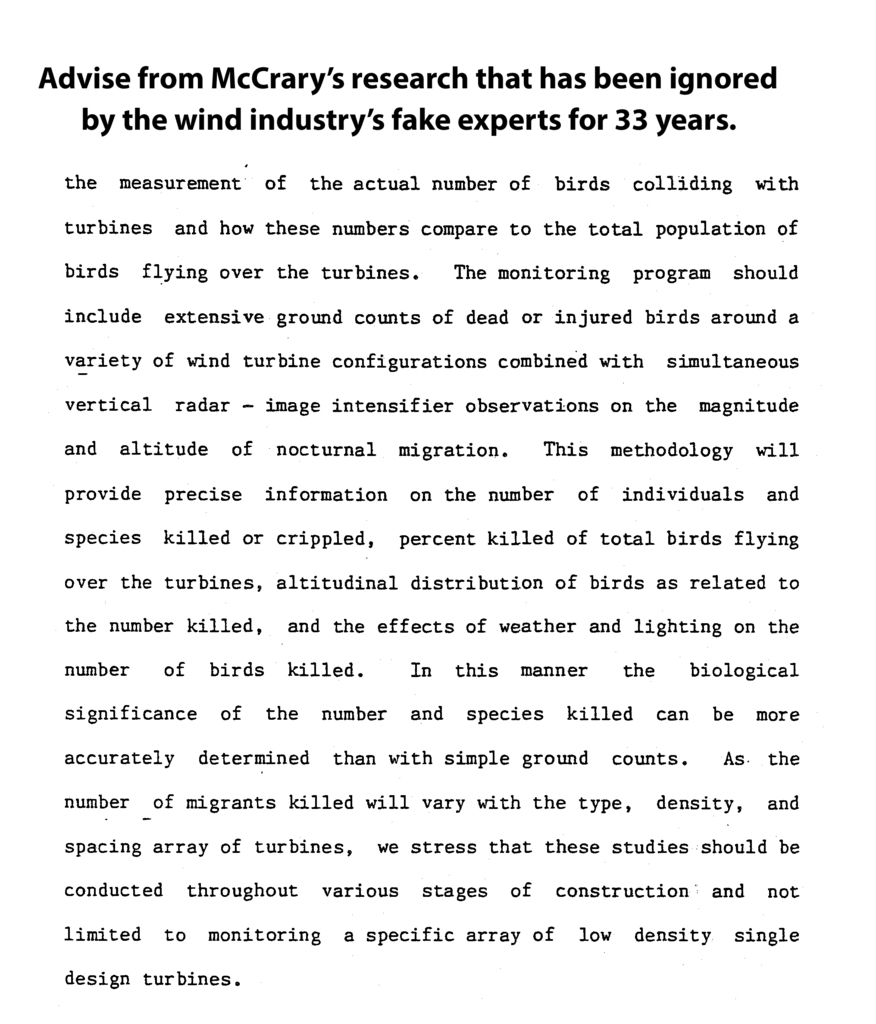 I will be posting data from an honest radar study soon and add more comments pertaining to Audubon's bogus Monhegan Island radar study.