Is Angus King & Yale's Record Hill Wind Project Living up to the Promises it Used to get $102 million Loan Guarantee from U.S. DOE?

A concerned Maine resident and U.S. citizen and taxpayer has just provided the following bit of analysis:

Record Hill Wind missed the filing deadline again with FERC for 2Q2016 (it was 8/31). I have to believe that they are in serious financial trouble. The ISO-NE Average Wholesale Energy rate for 2Q2016 was $23.39 MWH. In 2013 it was $40.74 MWH and in 2014 it was $38.18 MWH. Kibby reported an average rate for 2Q2016 of $20.42 and Stetson 1 reported a rate of $19.81 for the quarter. I project that Record Hill has to come out somewhere in the middle. As such, they have incurred a 50% reduction in energy revenues and NG prices are not going anywhere anytime soon. Either the project is close to draining the last of its “Restricted Cash Reserves” or Yale has been funding shortfalls which will not last much longer. Record Hill has a very high debt rate on its government guaranteed debt (+9.0%) and it absolutely cannot service that debt and cover operating expenses at current energy rates. 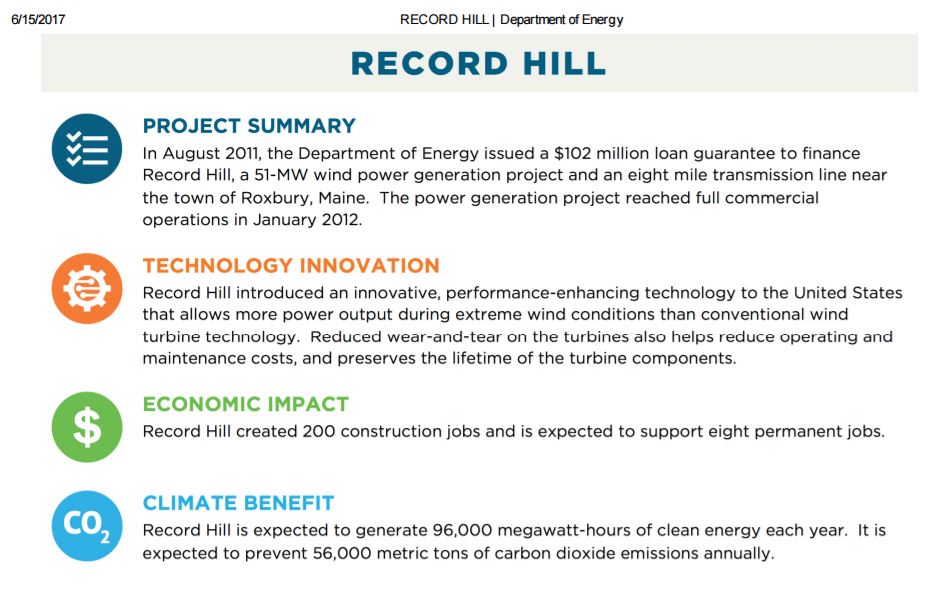 The project, constructed with a taxpayer subsidy of more than $100 million, and sold to ratepayers by Angus King before he became a US Senator, was underwritten by Yale University, in its "quest to be to be the world's greenest university."

The Connecticut school boasts that it bought Record Hill to "provide a meaningful economic return to the Endowment while helping the University achieve its sustainability goals."

Aren't those Ivy League folks supposed to be smart?

For the quarter, the Byron & Roxbury, Maine project's average energy price was a paltry $21.11 per megawatt/hour. (That's 2.1 cents per kilowatt/hour.)

Its capacity Factor was merely 24.4%. (This effectively means that three days out of four it doesn't work.)

Total Energy and Capacity Revenues (it's a travesty that we waste capacity payments on wind projects) were $740,000 for the quarter.

Could be interesting when Yale’s investment committee reviews the project’s "sustainability" and "meaningful economic return."

Residents around Ellis Pond, Appalachian Trail hikers, as well as motorists on Maine Scenic Byway Route 17 between Rumford and Rangely, are stuck with a massive industrial eyesore that does nothing to save the planet.

Meanwhile, Connecticut continues plotting to ruin many more Maine mountains as the "Clean Energy RFP" progresses. Rest assured that the bidders in the RFP cannot survive if they win government-mandated contracts at 2 or 3 cents per kilowatt/hour.

Not unlike those well-educated people at Yale, perhaps we have not learned our lessons. Nobody will know what a bad deal the RFP is until AFTER the contracts have been signed: "Final results of the RFP will be announced to the public when executed contracts are filed for regulatory review."

Last week Friends of Maine's Mountains had a meeting with Governor Paul LePage to warn him about the Clean Energy RFP's potential impact on Maine's economy and environment.  Over 2000 megawatts of Maine-based wind development has been bid in the RFP.  In the meeting we urged Maine's Chief Executive to use his influence in Connecticut, Massachusetts, and Rhode Island to discourage overpriced contracts that could be mandated by the public utilities commissions in those RFP states.

FMM will continue to monitor the process, and we will oppose all Maine wind projects that eventually emerge from the RFP.