Amazingly, the Bangor Daily News published in this week's Metro Magazine an excellent essay critical of the wind industry's tactics based on the author's experience in Frankfort, Maine and its dealings with Eolian wind developer (the worst of the worst). Unfortunately, the Metro Magazine doesn't provide commenting opportunities. It is also unfortunate that the editor chose a stock photo intended to glamorize wind turbines instead of a photo of a destructive Maine wind site. Still, this is a great essay to read!
http://bangormetro.com/Articles/1410/The-Wind-Energy-Machine.aspx

Excerpt:  "I witnessed first hand the underbelly of the wind energy machine, and how they intimidate ordinance committee members and manipulate small towns strapped for money. Using innocuous terms like “windmills” and “wind farms” can’t disguise the reality that wind energy is a ruthless business guided by money and greed, as much as by any aspirations to save the planet."

From the top of Mt. Waldo looking east across the Penobscot River are the ridges in Orland that are also under threat from Eolian: 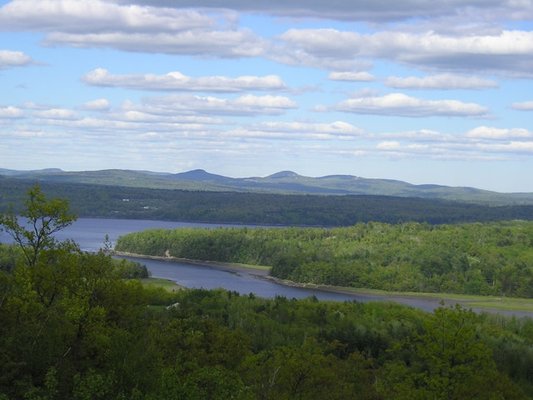 Have noticed that the banks that First Wind has used in the past are international and dirty. Deutshe , wish I could spell, Credit Suisse, UBS...the big dirty ones have been the banks willing to lend money for wind farms in a state that didn't even have room for them in the grid. The plan was to just knock a few off and make room. One in northern ME had to sell because the energy could be bought cheaper from Canada..another one Indeck, had to sell because Iso New England would not pay agreed upon price. Another one, Brookfield,  lawyered up and concentrated their defense on transmission lines. When Indeck sold, the new buyer did not know about the grid problems. So to me, Iso New England is in on the scam. And Harvard doesn't look so hot either for investing in Stetson II.

Several years ago, the governor of Conn. sued Iso New England for over a million dollars worth of power charged to New England rate payers for power not delivered. He also would not build transmission lines through his state for "a few wind farms in upper state ME." He lost the case at the Supreme Court. And went on to become a senator. Can't remember his name.

So our state Rep. Mike Michaud , is taking a big chance in continuing to align himself with this totally democratic scam. It hurts me, as I am a democrat and have had a lot of respect for him in the past. A little more conservative than I am, but he represents a conservative district.

Agreed, Martha.  BDN has been an advocate for the perfect money laundering vehicle, wind energy, as identified by money laundering specialist, Christine Duhaime, author of 'The Windfather'.

“The Windfather” – Another report finds wind and renewable energy p...

Organized crime is attracted to wind energy for three reasons: (a) generous government subsidies and feed-in tariffs; (b) corporate tax credits; and (c) the ease with which they can launder proceeds of crime as a result of the lack of knowledge of the mafia, money laundering and forfeiture risks on the part of financing and governments participants in the wind and renewable energy sectors.

According to the Europol Report, organized crime is uniquely situated in that they have an abundance of cash that they need to invest (hence, launder) at a time when credit is hard to come by for corporations. The renewable energy sector provides the perfect money laundering vehicle to legitimize criminal operations because of the multi-layered corporate and financing structuring required, and the lack of money laundering awareness within the sector. Given that renewable energy is expected to grow by at least 20% by 2020, the problem is expected to get worse not better.

Kudos to BDN. This is a start for newspapers to become advocates of news again instead of transcribing for corporations and unscrupulous politicians.

Thank you Barbara Durkin for this most interesting information.

Mike Michaud, the tide is turning. The money will run out..don't allow your reputation to run out with it.

Thank you, Brad, for your vigilance and advocacy for ratepayers and the environment.

The take-away, for me, is that wind energy is a vehicle for public corruption.

I was just reviewing a New York Times article, 'With wind energy, opportunity for corruption', from Dec., 2009.

"Police investigators have been busy across the Continent in recent months. This year five Corsican nationalists were jailed and fined for skimming €1.54 million in European subsidies for wind farms. In Italy — where three investigations are unfolding — 15 people were arrested last month in a case the authorities code-named Gone With the Wind. They described it as a complicated Ponzi-style scheme to reap as much as €30 million in E.U. aid.

One of the suspects — who was briefly held under house arrest — was a former business partner of the founder of a Boston-based energy company called First Wind. The company’s records were subpoenaed last year by the New York attorney general’s office, which is investigating the state’s wind industry to determine whether promoters improperly sought land-use agreements from officials in return for special benefits." [cut] more on UPC First Wind founders' subsidiary and affiliate, the since convicted Oreste Vigorito of IVPC:

The board of his association includes a representative from the National Italian Wind Energy Association. In November, Oreste Vigorito, the leader of the Italian association, was arrested in the Gone With the Wind case and accused of participating in an illegal scheme to collect European subsidies. Mr. Vigorito’s lawyer says he is innocent of any wrongdoing.

As long as wind energy benefits from generous subsidies, sometimes “easy money can be made in the sector and that can attract the unscrupulous,” said Jason Wright, a Milan-based director of Kroll Associates, a risk security investigative firm, which has uncovered evidence of bribery and fraudulent environmental evaluations for Italian wind parks."

A bit more from the NYT's article-

A separate investigation, labeled Operation Aeolus, in western Sicily, resulted in the arrests of seven people this year who will face trial in January. In that case, prosecutors allege that organized crime had simply adapted old-fashioned techniques like kickbacks and bribery to make money from new energy, including giving one council member €75,000 and a Mercedes to vote in favor of a wind park.

“Cash is king,” said Anthony Campanelli, a forensics investigator for Deloitte Financial Advisory Services in New York. “In a down economy, individuals might be more inclined to need more cash. They might look at green energy as a mechanism to use ill-gotten funds.”

Why would regulators, citizens, politicians and legislators consider that this leopards' spots have changed in the U.S?  If they're bribing politicians and using kick-backs in Europe to sign us up for wind Ponzi-schemes, is it realistic to expect their illegal and unethical dealings will not occur in the U.S.?

Didn't Kurt Adams as Chair of the ME PUC accept First Wind's offer of a VP position and stock options from UPC First Wind?