The project is part of a $12 million plan in Maine and Canada to explore the potential of ultralocal, renewable energy supplies. Just why the regulators are revisiting what had been a closed case is, for the moment, a mystery............Maine’s investor-owned transmission utilities aren’t generally allowed to own electricity generation assets. But the law exempts projects that would allow utilities to own generation needed to run their operations efficiently. Emera argued to the…

Vermont wind application withdrawn due to tax and regulatory risks

"Uncertainty around the federal tax policies that drive the economics of independent power projects like Swanton Wind have significantly impacted project financing," Charyk said in the statement.................In an interview, Charyk said the "hostile environment" in Vermont included Gov. Phil Scott's opposition to large wind projects, his appointment of a wind critic to lead the Public Utility Commission, and the commission's recent rule that will limit sound at future wind…

BDN - Drinking the Kool-Aid and Driving in Brunswick

Partnering with Revision Energy and Tesla Motors, the charging stations are powered with 100 percent renewable energy........Redevelopment officials for the former base which closed in 2011, have made renewable energy and “green” technology a priority..........… 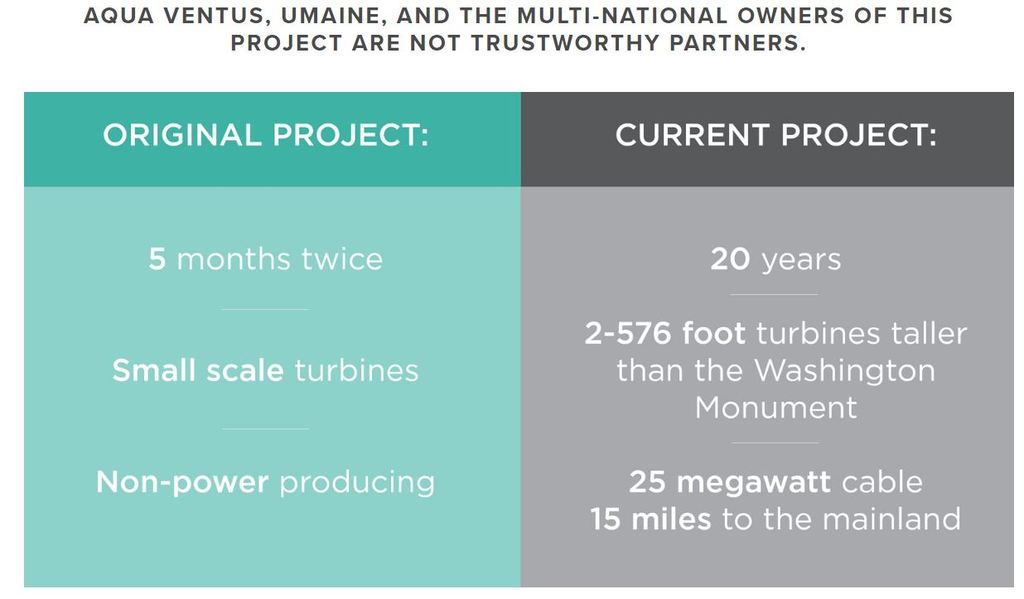 The resolution expresses the sentiment of the Fishermen's Association and its members that the project and the proposed landing of high voltage cables onshore in the Town of St. George, Maine would…

Here’s Why You Should Call, Not Email, Your Legislators

“What representatives and staffers want to hear is the individual impact of your individual story,” she said. “I couldn’t listen to people’s stories for six to eight hours a day and not be profoundly impacted by them.”

Representatives in Congress may not be able to respond to individual phone calls, but your odds may be higher if you contact officials at the local or state levels.…

Monhegan to Mt. Katahdin - How Many Wind Turbines Appear In These Maine Landscapes?

But I forget. Painters know nothing of what constitutes beauty. Bureaucrats do.

Bureaucrats and "landscape architects" are the authorities who deem Maine's scenery OK to trash with industrial wind turbine garbage.

A vast majority were against any wind development. “You're going to destroy our environment with tall, massive wind turbines so (people in Omaha) can feel comfortable,” Stanton resident Tony Wortman said. “Do they put wind turbines in Omaha? Do you put wind turbines in Stanton? No, but you'll go out in the country and you'll irritate a neighbor… so bad that they're talking about moving. ”…

It’s an expensive, wasteful subsidy to an inefficient industry. Congress is focused on making our backward tax code into something that encourages our nation’s instinct for creativity and innovation. As we look at all the wasteful and unnecessary tax breaks that are holding us back, I have a nomination: At the top of the list should be ending the quarter-century-old wind production tax credit now — not two years from…

My Turn: Some serious questions in regards to renewable energy

By WALTER CUDNOHUFSKY and DEBORAH ANDREW

On Oct. 25, two well-intentioned organizations, Greening Greenfield and The Trap Rock Peace Center, showed the film “Breakthrough in Renewable Energy” at the First Congregational Church. Everyone would be wise to watch this film, which you can for free on YouTube.

“Their exuberance may be a bit premature,” he said. “We believe the evidence makes a clear argument why the permit should be denied. We feel very confident that there is…

Question of the Week

Received this today from a person in the Maine wind opposition:

On Maine’s Vinalhaven Island, David and Sally Wylie said they were shocked when the three offshore turbines were turned on in 2009 before the new rules were enacted.

“We’d been told the wind and the trees would cancel the noise out. We stood outside as the wind turbines came on, it was just whack, whack, whack! It was so loud,” David Wylie said. They built a soundproof bedroom with 12-inch thick walls just so they could sleep.…

“The CMP Maine Power Reliability Program certainly did not keep the lights on in Maine despite the program’s $1.4 billion price tag,” he wrote. “CMP’s incompetence and lack of planning turned what should have been a short power outage into a prolonged and painful experience.”

Every winter, some Mainers must choose between groceries and their heating bills. Worldwide, millions of energy-poor people die every year because they lack a clean fuel such as natural gas for cooking and heating and the energy necessary to make clean water.

I am an early adopter of solar energy; unfortunately, there are times when the sun doesn’t shine and the wind doesn’t blow. At those times, I need a reliable source of electricity provided by a regulated…

The CMP Maine Power Reliability Program (MPRP) certainly did not keep the lights on in Maine despite the program’s $1.4 billion price tag........“If we don't do this, the lights will go out in southern Maine,” said Sara Burns, the former CEO of CMP, in 2008......To put the scale of this transmission investment in perspective, only about 1.3 million people live in Maine, according to the U.S. Census Bureau. This means CMP spent about $2,500 for every single customer it serves in…

Following that hearing, expected to last about an hour, Bethel will hold public hearings on proposed amendments to the town’s commercial wind ordinance and a request for authorization for selectmen to dispose of the former West Bethel Children’s Center building. The wind proposal will be voted on at a special town meeting Nov.…

Is any of the money going to wind "farm" maintenance and repair one wonders?

Pingree is a resident of North Haven. She says the electrical energy for the islands' grid is mostly generated on Vinalhaven by a community-owned wind farm. …

The world’s largest wind turbine makers said a proposed Republican tax bill that would cut support for the industry in the U.S. would put its businesses and future investment at risk, in a rare public criticism on Friday of government proposals.......Equipment makers operating in the world’s second-largest wind turbine market have relied upon so-called production tax credits (PTC) agreed in 2015. In a new tax bill, unveiled late on Thursday, the PTC would be cut to 1.5 dollar cents per…