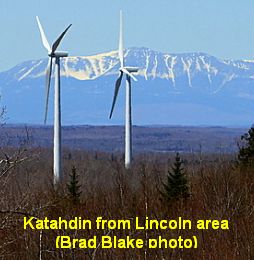 Biodiversity Research Institute will use the federal money to help develop high-tech cameras.

Meet the latest wealthy political powerhouse, California liberal billionaire Tom Steyer, who has emerged as an environmental hero and major source of cash for Democrats.

This is not just any Big-Bucks liberal. He's the extremely successful …

Dagher stressed that UMaine is still in the running for a significantly larger federal award. If more funding becomes available * through the budgeting process or another recipient fails to meet the terms of their agreement with the Department of Energy, the department could dole out that money to any candidates that didn’t receive the full amount, according to Danielson.

Friday’s event drew Rep. Mike Michaud and Sen. Susan Collins, who were credited for their…

This time around, Eolian officials have been seeking comment from residents about the $100,000 the company is guaranteeing to pay every year in a community benefits package.

Frankfort’s current wind ordinance, passed by a 244-222 vote, in the fall of 2011, became the first land-use regulation to be enacted in the Waldo County community. It creates a setback of 1 mile from the turbines to each property line of a landowner who is not…