Wind turbines are great if your selling them

Don't ever blame a wind turbine for anything in the media. This message rigging allows the green scammers to keep on selling more of these worthless heaps and infrastructure to the ignorant consumer. The truth is, all the turbines in Texas could be spinning at full speed and power would still be out.

The reason, at best they can only deliver a fraction of the power needed to load the grid for consumers. The New York times claims 10%, but it's really far less because not even 10% of the people in Texas could get reliable power from these turbines.
And this is Texas, the state with the most turbines, thousands of them. But turbines without the big electrical suppliers of energy, turbines are useless for the masses. So in ten years or so after this administration allocates trillion$$$$ for new developments, what's really going to happen.
In the Northeastern US, 6000 5MW turbines could be built to match the capacity in Texas and the grid would still be in even worse shape than it is in Texas today. Under Joe Biden's new green deal even after thousands are built offshore and on land, Joe Biden's will have solved .........Nothing for the consumer and what an environmental mess.
Joe Biden, America can't ever build enough turbines, to ever meet consumer needs. Not even close. So while Joe may or may not understand this, energy developers and the corporate dirtbags that put him in office sure do. 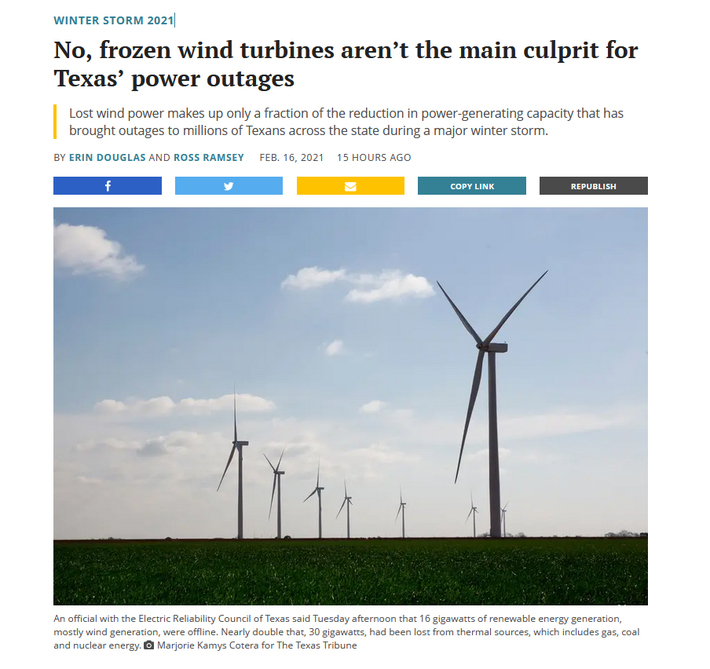 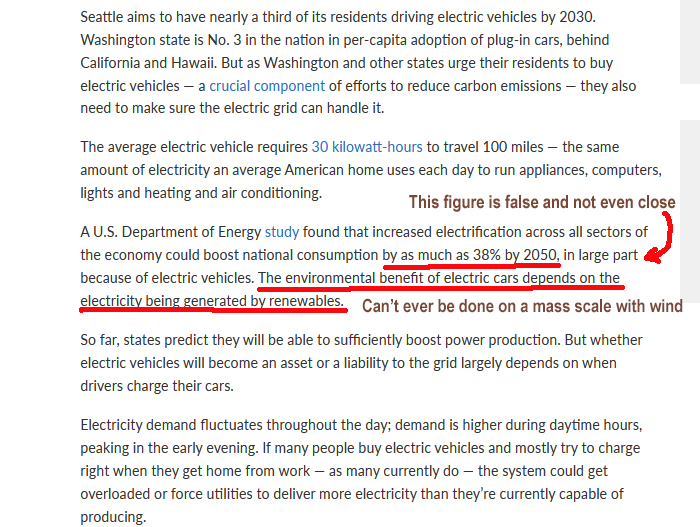 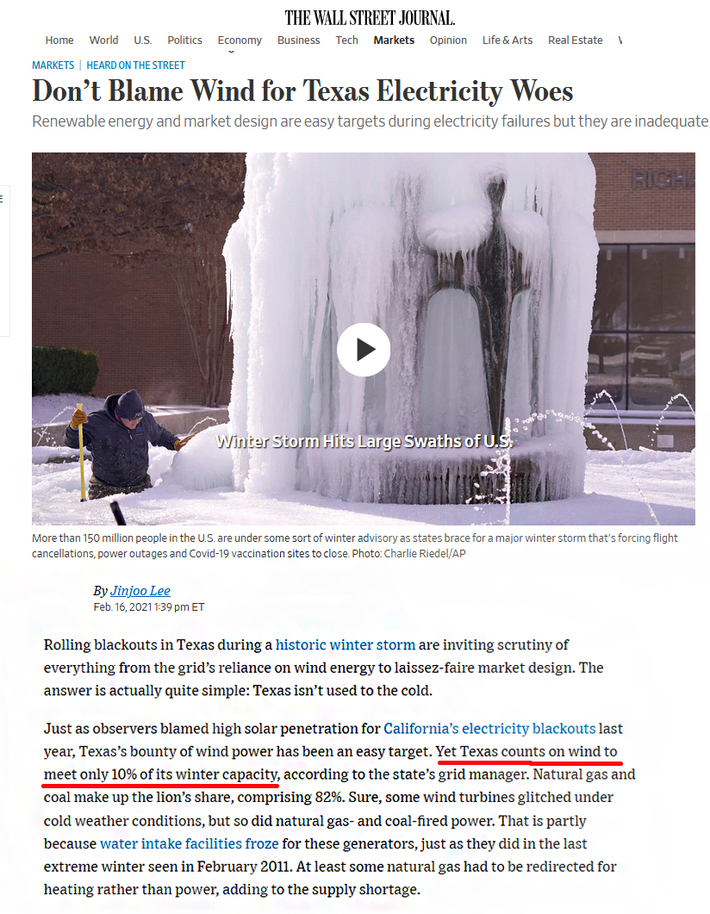 In Texas there are substantial losses from thousands of miles of wind farm transmission lines. I would make a hefty wager that with all the wind power in Texas, complete with battery storage and placed on an isolated grid, not even 5% of the population could have reliable power.   These  green bastards have been lying their asses off about wind production for decades, to keep selling more turbines and robbing taxpayers with inflated PTC's.

People also need to understand that tax credits are based upon this industry’s self-reported energy outputs, which are not true.  I even have a document showing Enron wind (one of the founders of today’s corrupt wind industry) receiving energy credits that would amount to an impossible 72% capacity factor for their turbines.

With the election of Biden and the left, is U.S. Senator Angus "The Windmill" King of Maine  back in the wind business again, with his sidekick son Jr. of First Wind days?

Record Hill Independence Wind may not have been as financially rewarding for him a decade ago.

Will he try again at the graft gravy train?

Energy systems analysts get paid to determine adequate sets of measures, in case of extreme events, such as: 1) cold/hot weather, 2) hurricanes, 3) floods, 4) major snow storms with icing, 5) multi-day wind/solar lulls, 6) major plant outages, etc. All of these have been common occurrences for many decades.

Analysts are expected to have good answers to questions, such as:

Gee, what happens to our electricity supply, if we have inadequate fuel oil and gas storage near gas turbine plants?

They likely would recommend RELIABLE RESERVES of generating plants and fuel storage, ready to provide electricity at a moment’s notice. They would say wind and solar do not qualify as RELIABLE RESERVES, as has been proven on numerous occations..

In Texas, 12,000 MW (about 5,000 units) of 25,100 MW installed wind turbines were not producing any electricity, because of ice-ups, according to ERCOT, the grid operator.

Similar ice-ups take place in Germany, etc., but those turbines have heating systems for the blades and nacelles, the Greyhound bus-size boxes on top of the masts.

NOTE: The Valley News, etc., wrote: SOME wind turbines were not producing.
The writer failed to google, or did not understand what he was reading, or is an RE dreamer, or was told to “soft-pedal” it.

According to ERCOT, wind turbines on the Gulf Coast were unaffected by freeze-ups, and, because of strong winds, produced more electricity than expected, which turned out to be a god-send.

RE zealots celebrating shutting down gas plants, or cutting off their gas/oil supply, as was done in California, is far beyond rational

Gas was curtailed to power plants, because it was diverted to people to heat their poorly insulated houses and buildings; the same happens in southern New England during winter. The curtailment reduced electricity production by the gas plants.

Some fossil plants were down, due to the cold weather.

ERCOT pleaded with people to limit their consumption, so there would be enough electricity for everyone
About 4 million had no power for days, including my friend, who lives in the suburbs of Houston, Texas.

WIND AND SOLAR IN NEW ENGLAND

Another day of almost no sun and no wind. This is nothing new in New England. It has been that way for many decades.

ISO-NE, the NE-grid operator, maintains accurate records of NE weather conditions, because 1) weather affects the reliability of the grid, and 2) weather creates constantly changing load changes on the grid, due to the variability/intermittency of wind and solar. 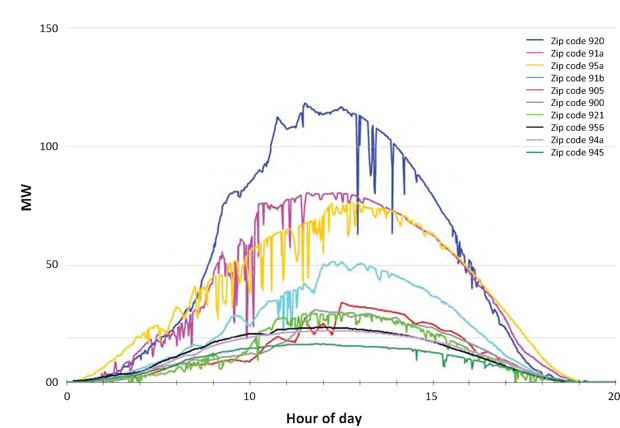 Wind and solar are VERY EXPENSIVE, HEAVILY SUBSIDIZED, PARASITES. They are cripples.

They could not even EXIST on the grid, without the presence of gas plants, or reservoir hydro plants, such as in Norway and Quebec, that can quickly vary their outputs to COUNTERACT the variations of wind and solar, 24/7/365.

The more wind and solar percentage on the grid, the more counteracting is required.
This up and down dancing causes wear and tear of equipment, uses a lot of extra fuel/kWh, and produces a lot of extra CO2/kWh.

Wind and solar, if large percentages of the electricity supply to the grid, say 40%, could exist, if there were enough battery capacity (MW/MWh), but that would cost about ONE TRILLION DOLLARS, JUST FOR NEW ENGLAND, at about $700/kWh, as AC delivered to the grid, plus those systems would last about 15 years.

For New England, about 10 TWh of battery capacity would be required, costing about $7 TRILLION at $700/kWh, as AC supplied to the gird.

Any electricity passing through the grid-scale batteries would be subject to at least a 20% loss, on an AC-to -AC bases.

What would RELIABLY refill these batteries, just in case another event would occur?

Any “break-their-will” RE zealots, who blabber in RE echo chambers about 100% renewables, and about “ELECTRIFY EVERYTHING” (nice slogan), have absolutely not the slightest inkling of what that would entail.

GMP flattening the daily demand curve, by on/off scheduling of heat pumps, is completely irrelevant, in the event New England would have: 1) a multi-day wind/solar lull, 2) snow covering solar panels, 3) a failed transmission line from a major power plant, and 4) cold weather, say less than 10F.

This is exactly what happened in New England about 3 years ago.

Luckily, NE gas plants could burn gas OR fuel oil.
Adequate fuel oil and gas storage did exist at the plants.
It was touch and go. It could have been as bad as Texas.
The camel managed to go through the eye of the needle.

Someone please explain to me on what grounds YouTube removed the following video of President Trump yesterday.

Only  Demento Joe and his "Green Old Scam" puppeteers think Texas was an anomaly.

Basic engineering indeed is underway, of a Flawed Basic Hypothesis, that of NON-DENSE Intermittent ENERGY sources replacing DENSE sources such as Fossil Fuel and Nuclear are a viable option to modernity and societal advancement,.  It cannot be done. Physics and Basic concepts of Thermodynamics dictate that this is impossible. The cost of the attempt will prove detrimental to our society for decades to come until a real Dense Source Utilization concept is understood, even by engineers who love to play with it at taxpayer expense.

We all  know , it is not  a solution to a problem which is a  problem and not a solution. It is an academic play-toy  of pop culture and the left , of great cost to the very society  it is thought to be helping.