Wind Turbine Infra Sound: Killing The Whales To Save The Polar Bears 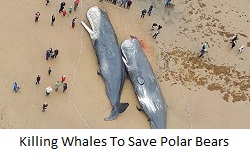 Whales are known to use infra-sound to communicate over distances—up to hundreds of miles in the case of whales.

The whale ear has specific adaptations to the marine environment. In humans, the middle earworks as an impedance equalizer between the outside air's low impedance and the cochlearfluid's high impedance. In whales, and other marine mammals, there is no great difference between the outer and inner environments.

The U.S. Navy and the National Marine Fisheries many years ago released a report acknowledging the role that the Navy's sonar played in the deaths of 17 marine mammals in the Bahamas in 2000. The report was the agency's first official admission that sonar may contribute to whale beachings.

A study concluded the low-frequency sound from the Navy's sonar to damaged the whale's ears, leading them to beach themselves.

The March 2000 stranding of 16 whales and a dolphin on Bahamian beaches was caused "by the unusual combination of several contributory factors acting together."

The year 2016 was the first year the United States deployed ocean wind turbines which coincide with the whale beachings.

The increase in the Whale deaths began when the construction of the Rhode Island ocean wind turbines began in early 2016 .

Living too close to wind turbines can cause heart disease, tinnitus, vertigo, increase in heart disease, migraine, panic attacks and other health problems .... I understand this can be regarded as a coincidence, but nobody was ill before 2006

In 2008 an unusual mass whale stranding, one of the few on record involving beaked whales, drew attacks on the Navy from environmental groups and attracted interest from biologists, including Peter Tyack at Woods Hole Oceanographic Institution (WHOI) in Falmouth, Massachusetts. "Tyack knew it wasn’t the first standing of its kind. Five similar strandings of beaked whales had coincided with naval exercises near Greece and the Canary Islands."

In 2015 facing several lawsuits, the US Navy has finally agreed to limit its use of sonar devices that harm dolphins and whales, especially in areas off the coast of Hawaii and Southern California.

The range of frequencies that whales use are from 30 Hertz (Hz) to about 8,000 Hz, (8 kHZ). Humans can only hear part of the whales' songs. We aren't able to hear the lowest of the whale frequencies.

Between January and February this year of 2016, 29 sperm whales got stranded and died on English, German and Dutch beaches.

Environmentalists and the news media offered multiple explanations – except the most obvious and likely one: offshore wind farms

At the end of May 2017 according to marine wildlife experts, the whales were likely disoriented by nearby wind turbines, which can affect the sonar whales use to navigate.

Scientist Neil Kelley and his team in the mid-1980s thoroughly documented significant adverse health effects resulting from inaudible, very-low-frequency sound produced by a large wind turbine in Boone, N.C. This scientifically rigorous NASA and Department of Energy-sponsored study, in cooperation with MIT and four other prestigious universities looked into human complaints from nearby residents about sleep problems along with whooshing and thumping sounds it made.The wind turbine also had complaints of disrupted television line of sight reception.

In 2011 the Chief Executive Officer of Vestas wind company CEO Engel Ditlev wrote a letter to Karen Ellemann about low-frequency noise. The CEO responded that Vestas does not have the technology to stop the noise.

Homeowners from Falmouth, Massachusetts to around the world complain of symptoms from two distinct types of noise from land-based wind turbines called "regulatory" measured in decibels and "human annoyance" or infrasound.

Today a common misconception exists that says wind power does not cause environmental damage.

This is simply not true. The Massachusetts courts have ruled two towns owned Falmouth commercial wind turbines are a nuisance.

The question today is the wind turbines infrasound causing problems with whales health as they have done to humans living near the turbines.

In the past two years, the number of unexplained whale deaths has increased in the North Atlantic.One coincidence is the increase in numbers of ocean wind turbines.

The health risk of infrasound from wind turbines has been dismissed by the wind industry as insignificant and allege land-based and offshore wind farms are good for the environment.

The Massachusetts land based wind turbines are a health and financial fiasco and again our politicians are saying as they did with the residential home owners there is no scientific proof the ocean wind turbines are hurting the Whales ?

Do the math: Whales are known to use infra-sound to communicate over distances—up to hundreds of miles in the case of whales.

Why do whales sing? - Stephanie Sardelis

Why do whales sing? - Stephanie Sardelis