Hanover, Massachusetts, Oklahoma and Presque Isle, Maine have all seen dramatic wind turbine fires in the last few weeks.
The obvious challenge facing firefighters is the height involved if a fire occurs in the turbine motor.
Due to the risk of falling fire debris over a wide area, approaching a burning turbine ...is usually not an option unless there is a life risk involved. If the turbine is turning, power is being generated and an electrocution hazard will be present.
Typically, a good option for firefighters to consider is to evacuate any endangered areas, set up a collapse zone, and attempt to control any ground fires to prevent the fire from spreading to other units.
In the case of a runaway or over-speed event, rotating turbines can throw debris thousands of feet away during a blade failure. Pieces of blades have been documented in California as traveling over 4,200 feet. Distance and time will fix this problem.
Pre-incident planning and Standard Operation Procedure development are keys to success for safely handling this unique danger.
Between 2005 and 2009 the news media and politicians touted commercial land-based wind turbines. Today your not going to read about the ongoing health, financial fiasco and now mechanical breakdowns resulting in massive fires. The blades can weigh up to seven tons each.
The residents who live near turbines in Falmouth, Massachusetts don't have fires but have reported problems such as sleep disruption, headaches, vertigo, and nausea. Today residents world wide report the same conditions. The wind industry would have you believe these people world-wide all got together like Hollywood actors making up the same story worldwide for the last eight years ?
Proponents of wind energy admit the turbines do make noise regulatory measured in decibels and infrasound a low-frequency noise called a nuisance or human annoyance. In 2011 the Chief Executive Officer of Vestas wind company CEO Engel Ditlev wrote a letter to Karen Ellemann about low frequency noise. The CEO responded that Vestas does not have the technology to stop the noise. The Town of Falmouth owns two Vestas V-82 Type 1.65 megawatt 110 decibel chest pounding wind turbines.
The Falmouth, Massachusetts local town Zoning Board of Appeals decided the wind turbines are a nuisance and in June of 2017 Barnstable Superior Court Judge Cornelius Moriarty issued the order to shut down Falmouth's town-owned Wind 1 and Wind 2.
Here is the video of the most recent wind turbine fire in Presque Isle, Maine --April 1, 2018
--------------------------------------------------------
The University of Maine at Presque Isle Wind turbine on fire
Published on Apr 2, 2018 Click link to watch fire
https://www.youtube.com/watch?v=VfILqeE39EY 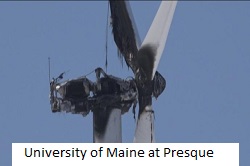 Penny -- The Migratory Bird Act is an international treaty the US cannot change --The Maine people should look into this act in regards to ocean wind turbine bird deaths --In 1940, the US and 17 other countries throughout the Americas signed a pact to "protect and preserve - in their natural habitat - representatives of all species  ...  of their native flora and fauna."

My guess is, there'll be some sort of special permits issued for killing coastal migratory birds in order to provide a secure and stable environment for off-shore wind development.  Same sort of kill permit that Obama enacted for raptors on behalf of the wind industry.

Will federal law be enforced against the killing of migratory birds by ocean wind turbines ?

The Migratory Bird Treaty Act of 1918 (MBTA), codified at 16 U.S.C. §§ 703–712 (although §709 is omitted), is a United States federal law, first enacted in 1916 to implement the convention for the protection of migratory birds between the United States and Great Britain (acting on behalf of Canada).

Wonder if turbine fires can still be reported as "oil spills".